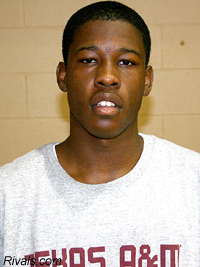 With the academic suspension of Spencer, it was hugely important that Trent Johnson reel in a talented point guard this year.  Trent reeled in two.  K. C. Ross-Miller was a late addition to the class, but he could prove to be immensely important.

Ross-Miller hails from Dallas, Texas, and he averaged a whopping 27 points per game, a nice 10 assists per game, and a you've-gotta-be-kidding 6.6 STEALS per game.  It may be of note that his father, Tim Miller, is also his high-school basketball coach, so I reckon K. C. has had some extra training.

Looking at film right now (finally, a freshman with film), I can tell you that even though K. C. doesn't have burning speed, he is a superb defender, and a guy that knows how to get his hands on the ball.  As a shooter, he's got a nice quick release, and his shot has a great upside-down U-shaped arc.  He uses his speed wisely, he knows how to slice between defenders, and he plays really well during transition.

Though he'll be competing with Andre Stringer as the starting point guard, Ross-Miller will see plenty of time in two-point formations.  I see 20-25 minutes per game for Ross-Miller.