We live in unprecedented times in the Southeastern Conference. With four straight national championships in football, the money, the glamour and the stakes are all reaching unprecedented levels.

And so is the hate.

In the SEC these days, we're all haters. It's just a question of the target. And who would I happen upon when stopping in at the Chimes for an after-work pint (NOLA Brown FTW), but two of the greatest professional haters of all time. 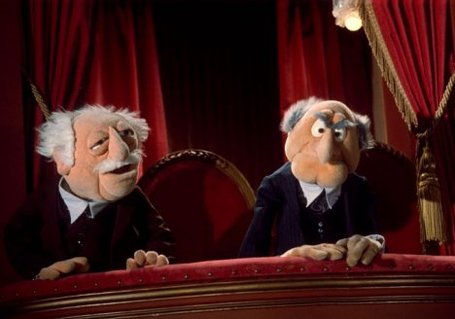 The barons of the balcony, the dukes of disdain, the Muppet Show's own Statler and Waldorf!

It took some cajoling, and quite a bit of abuse, but I managed to line up an interview. Believe it or not, they are huge fans of the SEC. Or at least, we're favorite targets of theirs.

Me: Guys, on behalf of all the fans of both And the Valley Shook and the Muppets, thanks for agreeing to this.

Statler: We'd offer to thank all seven of you in person, but we're not that magnanimous.

Waldorf: Saying that seven people will read this is magnanimous enough!

Me: Walked into that one I guess.

Me: Conference expansion seems to be a hot topic lately. What do you guys think about the SEC adding some teams?

Waldorf: It's about time.

Statler: Time for what?

Waldorf: Time that something in this conference expanded besides peoples' waistlines!

Me: Isn't a fat joke in the South picking the low-hanging fruit?

Waldorf: At our age it doesn't pay to be choosy.

Me: Last time the league expanded, it added Arkansas and South Carolina and created the SEC championship game. You'd have to say it's worked out pretty well.

Waldorf: I would have added Texas instead.

Waldorf: Pork and chicken are fine, but my Rabbi says I need more kosher beef.

Me: How about your thoughts on the league itself. How about the defending champ, Alabama?

Waldorf: Oh yeah? I wonder if they have those new chairback seats you're seeing everywhere.

Statler: Of course they do. There's just one problem.

Statler: They all face the field!

Me: Hey guys you have to admit, they won a championship last year, that was something to watch.

Waldorf: That's right, and I wouldn't have believed it if I hadn't watched it.

Waldorf: I don't know I didn't watch it.

Statler: Nick Saban needs something to stand if he's ever going to look a football player in the eye.

Me: A short joke. Droll. So what about Auburn?

Statler: Tigers, War Eagles, Plainsmen, pick a name and stick with it!

Waldorf: Well, I can't say I blame them.

Statler: Blame them for what?

Waldorf: Anything's better than their other name.

Statler: And that is?

Me: How about the Arkansas Razorbacks?

Waldorf: Heck of an offense.

Statler: They sure do score quickly.

Waldorf: Last time I saw a bunch of pigs move that fast, something was chasing them.

Statler: What was that?

Statler: Yeah, well you get what you pay for.

Me: So what do you think of the Florida Gators?

Statler: I heard Urban Meyer had some heart trouble this offseason?

Statler: He found out he had one.

Me: Oh now c'mon, there's a lot you can say about Coach Meyer.

Statler: Yeah but we can't repeat any of it on a family blog.

Me: Okay, how about the Georgia Bulldogs?

Waldorf: I wonder if their noses are sore.

Me: Why would their noses be sore?

Statler: Florida smacks them with a newspaper every year!

Me: Their coach, Mark Richt, is going into his tenth season between the hedges.

Statler: Trained to do what?

Waldorf: Stop losing games at home. Dogs are supposed to take a dump behind the bushes, not between them.

Waldorf: I love watching that Randall Cobb fella. He catches the ball, he runs with it and he even throws the ball sometimes. He's almost too good to be true.

Statler: Well there's certainly one thing he's too good for.

Me: I shudder to think about what you guys are going to say about my beloved LSU.

Statler: Hey Waldorf, do you know what time it is?

Statler: Neither does Les Miles.

Me: Oh c'mon guys, everybody's heard that one before. Can't you think of something else to say about the guy?

Waldorf: Why I think he gets better as a coach every year.

Statler: Are you kidding?

Waldorf: Well it could be that my eyes are getting worse every year.

Me: Okay, okay lets move on. I think I'm starting to know what Fozzie bear feels like.

Waldorf: Brown felt with a hand up your backside?

Me: Eyaaaah. Moving on, how about Ole Miss?

Statler: Time to break out our white sheets.

Me: What? C'mon the KKK thing kind of got played out last season.

Me: Ghosts? What do dead people have to do with the Rebels?

Statler: They're the only ones who know what it's like to see Ole Miss win a championship!

Me: Good one. How about their counterparts to the south, the Mississippi State Bulldogs?

Statler: Another set of Bulldogs?

Waldorf: I hope these ones have had their shots.

Me: Dan Mullen seems to have them playing like they have some life in them.

Statler: Because that life's in Starkville! 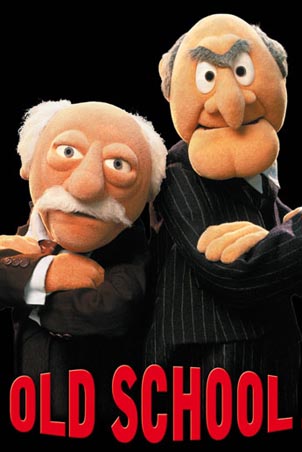 Me: On to South Carolina.

Waldorf: How much longer will they put up with Steve Spurrier over there?

Me: Oh c'mon guys, he's been a great coach for almost half his life.

Statler: Too bad South Carolina got this half!

Me: Let's just move on to Tennessee. They had a pretty eventful offseason with Lane Kiffin leaving and Derek Dooley coming in.

Me: How about Dooley?

Statler: He'd be better off in the circus.

Statler: He'd be a great clown. Of course that's one job his dad couldn't get for him!

Me: Well, that brings us to Vanderbilt.

Statler: I love what they do for education.

Waldorf: What? We're talking about football!

Statler: And Vandy's football team is so bad it drives people to read more books!

Me: Well that's all the time we have. Thanks for sitting down with me.

Waldorf: It was your pleasure I'm sure.

Me: I'm sure folks will get some novelty laughs out of this.

Statler: Well that'd be a novelty for you, wouldn't it?!