The 2011 Signing Class and Attrition Breakdown

Share All sharing options for: The 2011 Signing Class and Attrition Breakdown

Before we can launch into the topic of the 2011 signing class, it's necessary to take a look at the number of scholarships that will be available for the upcoming year. Currently, LSU is sitting at a full slate, having a player occupy each of the 85 scholarships the NCAA permits. This is a good thing, of course. What's not a good thing (in terms of recruiting) is that LSU is only graduating nine current players after this season. The importance of this being that 2011 is truly a banner year for recruiting in the state of Louisiana, and since the majority of LSU's talent is homegrown, you'd like to see them gobble up as many of the in-state stars as possible rather than letting them sign with SEC rivals.

Alas, I've constructed this oh-so-informative, handy-dandy list for you to refer back to for all your days (or at least this season). Really, any moron with five fingers and the ability to add and subtract could have done similar work, but at least now you have it here in nice, uniform form. The format is such: Player Name, (Years of Eligibility Remaining). This is loosely organized for depth, but that's not really the purpose. Also, a lot of these are position guesses (for the incoming freshmen), so give me a break guys, don't judge too harshly.

I'm guessing all four of these guys (assuming Zach Lee makes it on campus) will be back next season. Everyone involved with LSU and yours truly think Lee will be on campus.

Murphy is the lone graduating senior, and I have no reason to believe that any of the other four will be leaving. There is a possibility that Murphy could apply for a medical redshirt, but we'll see if that happens. Unrelated to attrition: It should be interesting to see if Blue sticks at RB, because I could see him moving to LB.

Pretty straight forward list. Notes unrelated to attrition: I think Jacobs ends up at offensive tackle and both Edwards and Dickson will be FB/TE hybrids this season.

Barksdale is the lone graduating player on the offensive line. A lot of good young tackles now and coming.

LSU roster still lists Cordian Hagans, but he is transferring.

Fordham was a TE in HS, but it's assumed he'll take on the center position at LSU and he's listed on the site as an OL.

I love all this DE depth. It's been a while since I remember having this many good bodies. Although, I think Jordan Allen ends up along the offensive line.

Peterson isn't graduating, but you'd be hard pressed to find anyone who thinks he's staying another year.

Eugene is the only graduating player.

Of the specialists, Jasper and Helton are graduating. Wing has yet to be cleared, so that's a situation to keep your eye on.

So, as you gathered from the list, there's only nine players currently on scholarship who will definitely not be returning next season (Richard Murphy, Terrence Toliver, Joseph Barksdale, Pep Livingston, Drake Nevis, Kelvin Sheppard, Jai Eugene, Josh Jasper and Derek Helton).

With that in mind, we turn our attention onto the 2011 signing class. Currently, LSU sits at 11 commitments and counting. Obviously they will add more names, but even if the class stopped where it is, they'd be over the scholarship limit by two. In a banner recruiting year, this isn't good news.

Where will the scholarships come from? 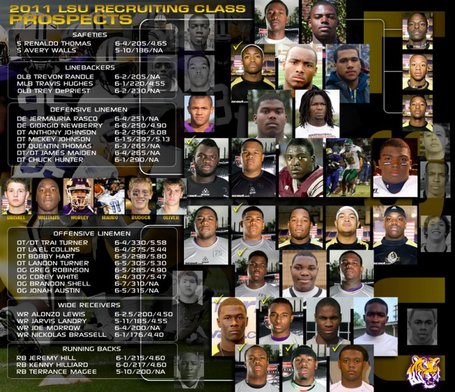 Well, we know with a certain degree of certainty that Patrick Peterson likely won't be returning for his senior season. So that opens up a single scholarship. So then attention must turn to guys currently on the roster who may not be returning. As a disclaimer, this is only my opinion with no inside information. Don't run and tell your buddies that you read on ATVS that Paul Crewe said so and so was leaving.

QB: I don't see any of these four moving on. I'm sure the Jarrett Lee transferring rumors will pick up more steam (as they seem to every offseason), but every year he sticks around it makes less and less sense for him to leave. I get the feeling if J. Lee was going to leave he would have done so already.

RB: Much like the QB situation, I don't foresee any defections here. Ridley isn't the type of player to go the NFL early and the others don't have that opportunity.

FB: Kellen Theriot is one name that I think should be watched. Theriot's had a rough go at it in his time at LSU, battling injuries for two years now. He's mired down deep on the depth chart, and we really have no indication of what kind of a player he is. He was a great athlete in high school, so I hope he gets healthy and gets a chance to showcase his skills.

WR: Lots of young guys here with lots of opportunities to play. No reason to believe any of them will be leaving.

TE: Of the seven guys currently listed, two names stand out: Alex Russian and Mitch Joseph. I doubt Russian leaves, due to his ability to long snap (though he struggled last year). Joseph is a block-first TE who seems to have lost his role to newly switched over Chase Clement. That being said, he only has two years remaining, so I'm not sure he'd leave.

OT:  I don't think anyone is going anywhere, but Stavion Lowe has already been passed on the depth chart by Chris Faulk and true freshman Evan Washington. He may not leave, but it seems a move down inside may be in order.

OG: Offensive line is generally the toughest position to evaluate. Some guys will struggle to crack the two deep for three years and then emerge as a great starter as a senior. Some guys flip back and forth between o-line and d-line and end up starting late in their careers. That being said, Matt Branch and Clay Spencer have yet to make impacts on the LSU depth chart. They've been passed by a younger players. There's still plenty of time for them to round into contributors though.

OC: Doubt there's much movement here with only three guys on the roster.

DE: There's a lot of young talent here and a lot to be excited about. Sam Montgomery left an impression all through camp. Barkevious Mingo looked unblockable in the scrimmage. Lavar Edwards and Chancey Aghayere played significant minutes last season and Jordan Allen and JR Ferguson are top 100 talents that will be on campus. Another interesting guy is Ken Adams. Adams is a JUCO transfer and should be playing significant minutes this season. Will Adams only make a pitstop at LSU before trying his hand at the NFL? I wouldn't think he's that kind of a talent, but you never know.

DT: The five guys remaining will all be back next season.

LB: Here's a position we could see some turnover at. Francois, Baker and Minter would be my guess for the starting LBers in 2011. Barrow should be a top back-up this season and next (if not a starter). The rest of the guys are so young it's nearly impossible to make any estimation about whether or not they will last at LSU, but due to the large  number of guys at the position, it seems like a spot where some attrition could happen.

CB: Peterson is gone, as mentioned. Of the rest, Ryan St. Julien and Drayton Calhoun are the names I'm watching. Calhoun has flipped back and forth between offense and defense since stepping on campus and hasn't seemed to settle into a position. The practice reports of his play haven't exactly been glowing. St. Julien is mired in the depth chart and been passed up by Morris Claiborne.

S: This is another position that remains up in the air. Coach Chavis seems to be constantly re-engineering the safety depth chart, as new names continue to circulate throughout it. Last season Brandon Taylor made the shift from corner to safety, in effort to maximize his speed. This season, Jai Eugene underwent a similar transition. Lost in the fray are Derrick Bryant and Karnell Hatcher, two guys who excel more at playing in the box and lack great speed. Each player only has two years of eligibility remaining. It's not out of the realm of possibility that they may look to move to a scheme that favors their skill set a bit more.

So, there's a lot of work to be done. There's a lot of truly elite talents in the state of Louisiana this year and guys that LSU cannot afford to pass up on. The question is, how will they make room for them? Well, it's gonna take a few magic tricks from the Mad Hatter.