This is the 3rd in a 4-part series previewing the Los Angeles Regional which begins Friday. We've covered the venue and the plucky 4-seed. Today we look at our sworn mortal enemy on the west coast, and his team, UC-Irvine.

When last we saw UCI, they played sneaky....

And we beat'em anyway 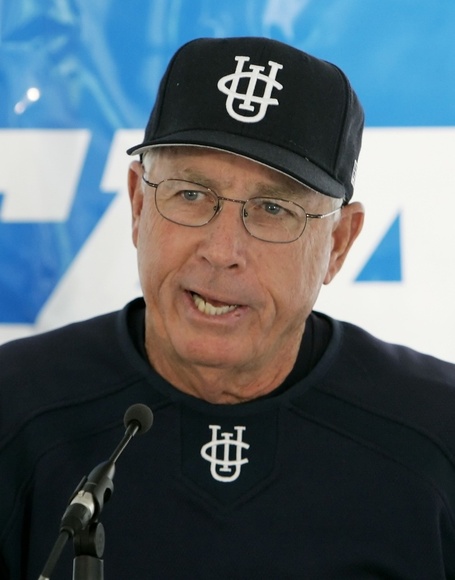 Cmon Mike, Tell us how you really feel...

It has been said by many Tiger fans that we got sent west in part of an effort to appease the constant moaning from West Coast programs. I think that's a harsh stereotype of California baseball, as it's probably just Mike Gillespie. The long time USC coach and former player, now in his 3rd year with the Eaters is a long time friend to all Tiger fans. Remember that time in the 94 BR regional where we got so friendly that the ump had to tell him to stop talking to us between innings? Or that time when we found his wife in the stands and he enjoyed it so much he gave a few fans a free pass out of the park? Or that time in 08 when he called us all dumb rednecks who don't, and I quote, "know the Civil War is over"? Yeah, good times. More than anyone else on the planet, I bet Gillespie is sooooo happy about the seeding because it finally gives him the opportunity to visit with us in his home town. I'm sure he'll be cordial this week.

You know how some LSU baseball fans break out in hives when you start talking about playing small ball? Those fears come from years of nightmares caused by Gillespie's USC teams that would come to BR or meet us in Omaha during the 90's and give us fits. The stats for UCI just scream another small ball special. 362 runs with just 33 dingers on 592 hits. They take few walks, most of their starters have less than 20 on the year (compared to LSU, who doesn't have a regular starter under 20), and they are averaging in the mid 20's in strikeouts. Their best at the plate is SR 1B Jeff Cusick, who leads the team in hitting (.379) slugging* (.579) and on-base (.458). He must be Gillespie's dream player with 40 runs and 56 RBIs off of 81 hits and just 8 dingers. If this is one of those games where we start making stupid fielding errors, it's gonna get ugly quick.

*Scott Gottschling actually leads the team in slugging with a perfect 1.000, but with only 4 AB in 7 appearances, it's probably not something to worry about.

I'm sure much will be said in the next part of this series about UCLA's pitching, but the Eaters have an excellent staff as well, and some of it is a little scary. Everybody's talking about Bibona (who we will probably face on Friday) but Christian Bergman, who was moved up into the Friday night starters role after Bibona's rib injury in early May, is the very definition of a pitcher on a streak, having thrown 3 straight shutouts, 2 of them complete games, in conference play last month. Their starters are all under .400 for the year, each with 74 K's at least. Relievers Evan Brock and Nick Hoover are lights out as well, both with ERAs under .300 for the year.

The line on SR LHP and Golden Spikes Finalist Daniel Bibona is just insane. 2.10 ERA 15 walks to 100Ks in 90 innings. He's only given up 5 dingers and 21 earned runs. As mentioned he was sidelined in early May with a rib injury and this will be his 1st appearance in nearly a month. Gillespie is probably hedging his bets here, hoping that Bibona has made a full recovery while saving his current ace for UCLA. And even if he's wrong, that bullpen is strong enough to depend on.

I'm really split on this one. You see small park dimensions and how well we did in Hoover and you think "perfect" and then you see Bibona's numbers and realize that this is going to be very difficult. Excluding outcomes like "Bibona isn't fully recovered and gets lit up" or we have another day like the series opener against Pomeranzbot at Ole Miss, this is going to be a nailbiter the whole way. If he's ready, just getting a few hits off of Bibona is going to be difficult, though I think the short field will help us make the most of those hits. I need some more time before I would think about giving a prediction, but if we play sound defense, and Ross has a good night, and we are patient at the plate with Bibona, we can win this one. Tall order? Sure, but we didn't come to Beverly Hills to sit poolside at the hotel.