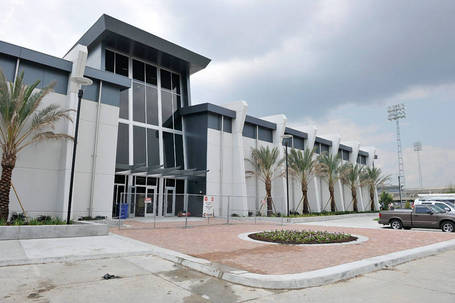 A reminder here at the top that the Murphy family is still in need of your prayers and donations.

1st few rounds of the NBA draft were last night and the only Tiger drafted was a former one. Magnum Rolle, who transferred to La Tech waaay back in the final days of Brady Ball, was drafted 51st overall to OKC. As of this writing, Taz remains on the board.

Seems I was a few days off in calling the end of LSU competition this year as many current and former Tigers are competing at the 2010 USA Outdoor Track & Field Championships in Des Moines. We already have a winner, as FR Takeia Pinckney takes gold in the 100M dash in the Junior Championships. ATVS favorites Lolo Jones and Walter Henning, among many others, will all be in the running for a championship this weekend.

In baseball, The Daily Rev mulls over what to do about a catcher now that Gibbs is going to Chicago, while DandyDon reports our 1st transfer from 2-time NJCAA champions LSU-E: 6'0", 180 lbs., INF Raph Rhymes, a .491 hitter on the season. Don puts him at 2nd and slides Hanover to 3rd for next season.

UGA isn't the only one with a rooting Interest in Wimbledon, as former LSU tennis player Ken Skupski currently leads a suspended doubles match on Court 18 vs Nicolas Mahut. Play should conclude sometime around Sunday....

More preseason awards as Patrick Peterson and Kelvin Sheppard are on the Nagurski Trophy Watch List.

Thanks to the "Cowbell Loophole" the vuvuzela will be allowed in SEC stadiums this year. Poll below.

Another former Tiger is being added to the LA Sports HOF. LSUSports.net has a profile of Lee Hedges, The man who brought football excellence to Caddo Parish.

The Bayou Country SuperFest was a great success by all accounts, but the field got tore up something fierce. Haliburton is using the opportunity to plant a new type of grass in TS, which will be partly paid for by the festival promoters.

Budget problems will continue at LSU next year, an expected 23% cut in funding is going to affect everyone.

Ominous Site News coming later today. No, Pittman still hasn't found a good internet connection in what must be the most rural area of Alabama. But it was his birthday this week (Happy late B-Day Richard).