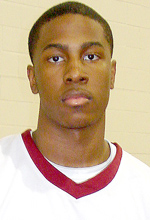 Ralston Turner, like Andre Stringer and Matt Derenbecker, is best-known as a shooter.  Some sites have him listed as a small forward, but since LSU lacks a quality shooting guard, Ralston Turner will probably play there.

Along with Derenbecker, Turner has the easiest road to a starting job for LSU.  While Derenbecker has literally no competition at small forward, Turner only has to beat Aaron Dotson and Zach Kinsley to start at the 2.

Sadly, I can barely find any film on Turner, but from what I've seen, he has the nice touch you want to see from a guard, and a nice amount of athleticism and speed as well.  Turner does not possess the unlimited range of Stringer, but he can shoot inside and outside.  He's strong, and he has some excellent basketball moves in his arsenal.

The best news is that with defenses focusing on stopping Derenbecker, Stringer and Storm Warren, Turner will have plenty of open looks, and that can make Turner even more dangerous.

If Dotson does not improve, look for Turner to play 25 minutes per game right away.