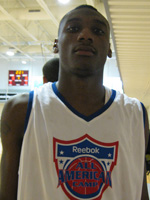 Jalen Courtney, a prolific Twitterer from Provine H. S. in Jackson, Miss., is arguably the least-hyped member of our new freshmen class.  At 6-8 with a frame that can hold 250, Courtney is a power forward destined to be Storm Warren's protegé.

But how soon will he play?

Many speculate that a redshirt is in his future.  If anybody will be redshirted, it will be him, but I'm not seeing it.  Although Courtney has plenty of room to grow, he has the necessary weight to contribute to the team.  Plug in Courtney as Storm's backup, and Eddie Ludwig can play less 4 and become a matchup problem at the 3.

Courtney put up 16 PPG and 11 RPG last year for the Provine Rams.  The hardest thing when judging a high school big man is figuring how much of that comes from his talent and how much of that comes from his being bigger than everybody else.  Though Courtney is not the scoring machine that Derenbecker and Stringer (both 26 PPG in HS) are, Courtney can make free throws at a solid rate, and can also rebound well.

I reckon Courtney will play a similar role to what Storm played in 2009- a freshman with few minutes trying to get his feet wet.  If he can pick up the speed of the college game at a faster rate than Storm could, probably more, but 5-10 minutes per game seems about right to me.