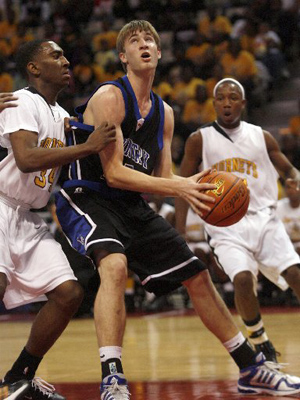 Now here's a kid that a lot of people have been waiting for.  The Metarie native, Louisiana's Gatorade High School Player of the Year both his junior and senior seasons at Metarie Park Country Day School (Eddie Ludwig also went there), is generally considered the best prospect out of Louisiana, and one of the beacons of hope that kept LSU hoops fans warm during a very cold winter.

The prototypical swingman, Matt is a small forward with guard skills, able to play both the 2 and the 3.  Offensively, Matt is known for his excellent range, and Rivals named Matt the fourth-best shooter among forwards.  When people talk about Matt Derenbecker, names like "Robbie Hummel" and "Gordon Hayward" are brought up.  Rivals expert even said that Derenbecker is a BETTER long-range shooter than Hummel, and that makes me excited.  Considering how poor LSU's shooting was last year, Trent probably can't wait to see Derenbecker wear the purple and gold.  With Tasmin Mitchell gone, Bo Spencer probably gone, and no proven shooter remaining, the Tigers will be counting on Matt to put points on the board right away.

But Matt is more than just a shooting threat.  Rivals named Matt "most versatile" among incoming SEC frosh, and he was also tabbed as having the "best basketball IQ".  That's great news.  Matt won't just be a threat to score from anywhere.  He should also be a capable defender, avid rebounder, terrific ball-handler, and instinctive stealer.  And his all-around skills will only make his offensive capabilities more dangerous.  Perhaps best of all, Derenbecker is, by all counts, an extremely hard worker, and a team-first player who would rather be named champion than player of the year.  He's also considered a great leader.  LSU will be starving for leadership, and Matt could be the guy that steps up and takes control of the team, even as a freshman.

But what should we expect from Matt in terms of production?  Small forward depth was never an issue last year with Mitchell playing 40 minutes every night, but Matt is the only true small forward on depth right now, and Trent is not going to have a freshman play 40 a night.  Although Ralston Turner and Eddie Ludwig can both put in some minutes at the three, one can expect Matt to play 25 minutes per game right away, and maybe more if he really lights it up, which is definitely possible.  As it stands, 10 points per game should be considered successful, but the qualities Matt brings to the Tigers goes beyond mere points.

Post your comments on D-Beck below.  You know you want to.

Next up: Aaron Dotson