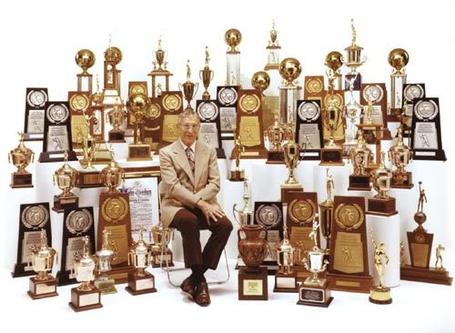 UCLA's best mascot, RIP John Wooden
What an amazing comeback last night. Watkins' Morris-like moment will certainly go down as the highlight of the season. We definitely had the offense we needed with 11 runs on 17 hits, but leaving 10 men on base is nearly what killed us.
I say nearly, because we clearly have alot more work to do on this pitching staff. We pulled ahead to a comfortable lead in the 5th but just lost concentration as UCI scored 2 runs in the 7th and in the 8th. We had gone through 4 relievers trying to find someone to lock it down. With 2 out and a 1 run lead in the 9th, Bourgeois could not get the job done. Alsup came into a high pressure situation and was not as lights out as we hoped, giving up the lead. Thankfully Watkins had a little magic left. Here's the lines on the staff for those interested.

Thats alot of our better relief used already, granted most for a very short time. The big question is now, with the win, who to start in Sunday's game. Granted that will change depending on how today goes, but no matter the outcome, it basically boils down to Bradshaw or a not-as-fresh Alsup (not that it was a long outing, but 2 innings is nothing to ignore).

Meanwhile, UCLA strolled to a very easy blowout of KSU last night. UCLA was impressive and KSU made some pretty silly errors. They got ahead big early and coasted to a win. With multiple substitutions as early as the 5th, the Bruins will be very well rested for the game tonight.

Elsewhere, In our paired regional it was a double upset night, with New Mexico pulling a mild upset of Stanford and Minnesota pulling off the shocker of the weekend by blanking CS Fullerton. If things work out, their could be a huge reward waiting for us if we can get out of this regional.

Despite yesterdays heroics, today should see the best game in all of college baseball this weekend. Ranaudo v. Bauer for the drivers seat in the Regional. I'm almost positive Ott will be brought in at some point, and it's make or break time for him. I hope we can give him a nice cushion before sending him out there.

I can only imagine how different the mood in JRS will be today. I'm not sure how UCLA's baseball team will be affected by Wooden's death. His effect on that university and all of it's members is so profound that the only thing I can think to compare it to would be what would happen if we lost Bertman. That is to say, it's a loss felt by the entire community, not just the basketball program.

TV: Cox Sports on the tube, 98.1 on the dial, ESPN3.com on the interwebs (if you are out of the blackout region).

The ETAHS fight for their lives against a creampuff at 4 CST(don't say we never did anything nice for you Gillespie) then we tip off.