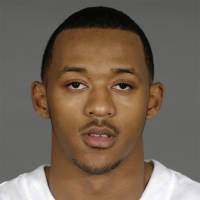 Maybe I was too hard on Dotson last year.  Dotson is a guy that could have really benefitted from redshirting, but didn't get to do that because our depth was so paper thin.  Dotson is an athletic player, but his shooting last year was abysmal: he attempted 46 3 point shots and sank just seven of them, a .152 clip.  Dotson suffered in other areas of his shot as well, shooting just .294 from the field and hitting free throws at an Shaquillesque .535.

But Dotson was just a freshman coming off a senior year he lost to injury.  Maybe his shot got super-rusty during his injury season, but his high school average of 14 points suggests he wasn't brought here to shoot.  Dotson is a pretty athletic defender who finished fourth on the team in blocked shots behind Warren, Mitchell and Harris.  I believe that with shooters Derenbecker, Stringer and Turner coming in, Dotson will not have to produce offense, and can focus on playing good defense and getting the ball to those who can shoot.  I've seen Dotson make some solid passing plays, and he should focus on improving on his 29 assists.

But I still can't help but wonder if there's a better shooter lurking somewhere inside of Dotson.  If I was asked who on the team was the most athletic, Dotson would be my answer.  He really has a feel for getting open.  If he can become even just an okay shooter, it would be a revelation.  I couldn't argue with some of his shot selection last year.  He got some wide-open looks sometimes, but he would rush his shot and watch it clang.

Let's not forget that Dotson arrived here with at least a little bit of hype.  He was a four-star on Rivals, and he received offers from Louisville and Washington, both basketball powerhouses.  He wasn't John Wall, but to those uncomfortable with starting Alex Farrer, Dotson seemed like the answer.  But Alex got injured before the season began, and left the job to Dotson, who started the opener and went on to start 17 games for the Tigers, but struggled mightily alongside the Tigers, losing a big chunk of his minutes to Zach Kinsley along the way.

With shooters like Derenbecker and Stringer coming in, there will be less pressure on Dotson to score.  I hope Dotson can flourish from the bench, but he's not going to be much of anything if he remains a .152 shooter.  He can help the team in other ways beside scoring, but he's a sleeper that can turn a young LSU from a good team to a great team if he gets over his clangsies.  I can't make a wager on his minutes- it would probably be ten if he continues to suffer, twenty-five or more if he blossoms into a great shooter.  It's up to Dotson to decide how much he wants those minutes, and how much he wants to help turn LSU into a winner again.