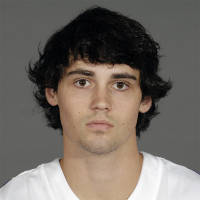 It ain't easy being Green.  Of all the struggles of all the players last year, nobody struggled quite as much as Garrett Green.  For many fans, Green was the personification of LSU's struggles.  He struggled to score- easy lay-ups bounced off the rim as if the rim itself was taunting him, and his foul shooting was truly foul (8-27, .296).

Excluding Bo Spencer, Garrett Green is the last of John Brady's players.  A victim of back problems that required surgery, the California native Green had to sit out all of Trent Johnson's first season, in which LSU reached the SEC championship season.

At the beginning of the season, Green was at his worst.  He was still recovering from his injury, and it showed.  He was slow and he struggled to get up and down to court.  Green would speed up, but his game wouldn't get much better.  Even with LSU's thin depth, Green was only able to reach 10 minutes per game thanks to foul trouble.

But I'm not going to write off Garrett Green as a scrub.  Green did show flashes of ability against Vanderbilt, during which he played a career-high 30 minutes and was able to limit Australian behemoth A. J. Ogilvy to just 12 points and 2 field goals in a loss.  Compare that to the year before, in which Ogilvy scored 31 on skinny Chris Johnson to beat LSU.  Though Malcolm White will certainly send both Green and Dennis Harris to the bench, Green still has the team's best combination of height and bulk, and he's going to be used when the Tigers need size on their side, and certainly when Vanderbilt and their Aussie come to town this season.

I think Green can thrive as a bench player.  I wouldn't expect him to turn into Dwight Howard tomorrow, but I do think that Green is capable of providing the Tigers with five good minutes off the bench per game to spell Malcolm White.  But Green can only get better, and if he can turn from a marginal player into a decent one, it could really lift the spirits of both the fans and the team.  Everybody is rooting for Green, and I have a feeling that Garrett Green will sink a half-court buzzer beater at some point before his career is over.