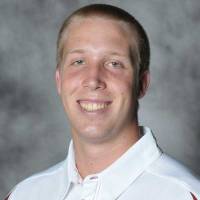 Bummer ending for the baseball Tigers, but you'll still check in to read my basketball profiles, right?

Although Justin Hamilton, a transfer from Iowa State, won't play next year, I feel compelled to make a profile on him 1. Because his name is next in alphabetical order and 2. because I haven't done so already.

To be honest, one day, I checked the basketball roster, and suddenly there was a new name.  It took me by surprise, as I suppose it did a lot of folks.  I'm not even sure if everybody is aware about our new big man on campus.

And a big man he is indeed.  Hamilton, a native of Utah (yup, he's Mormon), Justin Hamilton is 6-11 and 260, and I'm sure Trent will hate seeing that big frame of his sit on the bench all year.

His stats at Iowa State show him a capable, albeit unspectacular big man.  His best performance came against #1 Kansas, when he scored 11 points and 12 rebounds against Cole Aldrich, who is no slouch.  Hamilton went a career-high 36 minutes in that game.  While Hamilton probably won't have to go that distance here, it's good to know he's got the stamina to go the distance if we need him to.

Of course, he won't get to play until then, and when he does get to play, we'll have 4 centers on roster: White, Green, Harris and Hamilton.  That's some extreme big men depth, and I do have to ask why we got Hamilton and we didn't recruit a big man to be our center of the future, because after Hamilton's first season, only he and Harris will remain, and both of them will be seniors.  As deep and experienced our Center depth will be next season, it could go thin quickly if we don't stock up on young bigs in the near future.

Of course I'm nitpicking now, but it's the offseason, and we've got time to pick.  No nit shall be spared.  As for Hamilton, I really do like this kid.  He's a big man, and I bet he'll be a big help.

But let's get back to the actual upcoming season, shall we?

Don't forget to post your comments (you know you want to, and you know you forgot to comment on Dotson and Green's profiles too, so do that)

Next up: Dennis Harris