The heavens part and there, riding on the clouds comes a gift from the gods, or perhaps planet Krypton. Yes, he is the one we've been waiting for. Zach Lee. 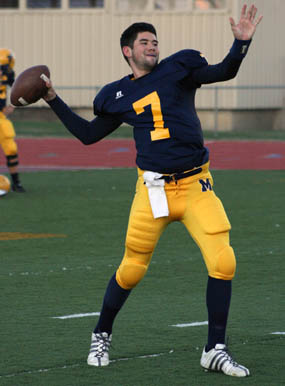 If only this picture came replete with angelic purple wings and a shiny golden halo to signify his immaculate arrival. Well, we hope so anyways...

Honestly, I can't remember if there has been a recruit perceived as important as Zach Lee currently is to LSU. Key word being perceived. By now, Lee's MLB status has been touched on enough. The will he stay or will he go debate will rage on until the MLB rookie signing deadline in mid-August. During his recruitment, many assumed he'd end up going the pro baseball route, and while some barked for the need to sign a QB, others retorted that with Jordan Jefferson and Jarrett Lee each having two more seasons and redshirt freshman Chris Garrett waiting in the wings, we'd be okay if he opted to go that route.

Fast forward to the summer of 2010 and many fans don't feel comfortable with either Jefferson or Lee holding the starting reigns and Chris Garrett is no longer on the team, leaving our No. 3 QB spot to... no other than... Zach Lee.

Truth be told, as successful as Miles recruiting track record has been to date, and it's been mighty successful, the lack of success recruiting QBs is equally notable. Ryan Perrilloux was Miles' first go at it, and we all know how that turned out. Jarrett Lee was stab no. 2, and he seemed like the perfect heady gunslinger for the job. Unfortunately, he slung his guns once too often in the wrong direction. So in true Reaganomic form, responsibility trickled down to Jordan Jefferson, whose fate is TBD, but racing towards despair if you ask most Tiger fans. Nevertheless, we held out hope that lightly recruited Chris Garrett would be the type of game-managing, non-ego we needed to lead this offense. Then Garrett said goodbye and LSU fans poured another round of bitter bourbon. (We can't forget the Russell Shepard dual-threat flirtation either).

So now, it all falls to Zach Lee. The Two-Sport Savior. The Sultan of Strikeouts. The King of Touchdowning. The Messiah of Multi-Sport Athletes. The Thor of Tiger Town. The Beowulf of Baseball. The Romulus of Record Books. The Odysseus of Owning Fools. The Wizard of Winning. The Gilgamesh of Going All The Way. The Bilbo Baggins of BCS Championships. I'm sure you get the idea.

He's a 6'4 200-pound QB from McKinney, Texas that doubles as a top-flight MLB prospect as a right-handed pitcher with a good fastball and plus stuff. Athletic, smart, competitive... in some ways it seems Lee is the total package. And LSU fans already expect him to be.

Do you think Zach Lee walks around hunchbacked from all the pressure LSU fans will load upon him? Most have given up on Jefferson and J. Lee (fairly or not). They want a real quarterback, and Zach is the newest thing that excites them. He is the iPhone 4 to the functional but less attractive Nokia 1006 that are Jefferson and J. Lee.

For this reason, he will be perceived as savior. From now until September, LSU fans will keep their fingers cross that Lee ends up in Baton Rouge permanently. After that, they'll hope he emerges as the real deal. After that, they'll hope he sticks around for four years and leads both the football and baseball teams to National Champions as a quarterback and front line starter.

One thing is for certain, Miles isn't doing Lee any favors. Chris Garrett leaving puts Lee in the 3-deep. He will presumably red shirt, but Miles is doing nothing to tamper the expectations that he may be the second coming of... Matt Mauck/Flynn (or is it Johnny Peyton Unitas Manning)?

So what is a realistic outcome in this scenario? Well, I'm convinced Lee ends up on campus. Call me foolish, but there's too many factors in favor of that. From there, I would guess Lee would take a redshirt and share the 3rd string QB duties with walk-on Barrett Bailey. In the spring, he'll take the mound as a no. 2 or 3 starter. In many ways, Miles seems to have latched his future onto Lee's success (assuming he stays at LSU). Miles can seemingly stay afloat through the rest of Jefferson's career, but unless that ends with some serious success, it won't just be the fans gunning for him, but the administration. Is that pressure fair to Lee? Probably not. But it's the hand he's been dealt...

Best advice I can give is be patient Tiger fans. Lee should live up to expectations, but it won't be tomorrow.