Some more thoughts on NCAA 11

Share All sharing options for: Some more thoughts on NCAA 11

This post is NOT sponsored by EA. No really.

I sat down with my new copy of NCAA 11 and after a few games I think there are a few things worth saying after my post yesterday. 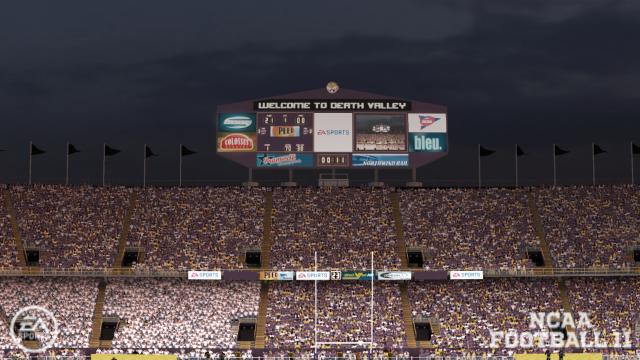 Credit where it's due, EA actually did fix the South Endzone board, though it kinda looks like they forgot to paint part of it. Also would have been nice if they filled in the SEC flags, but now I'm just reaching. 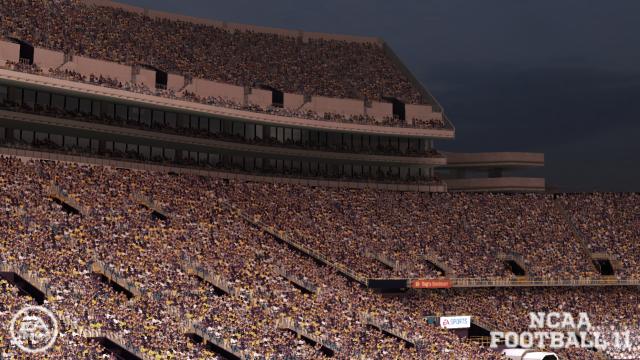 As noted yesterday, both Cannon and Casanova's retired numbers are missing. I might understand Casanova being missing, but Cannon's number has been there nearly 2 years now. They've corrected "ring of honor" additions at other stadiums this year, why not us? 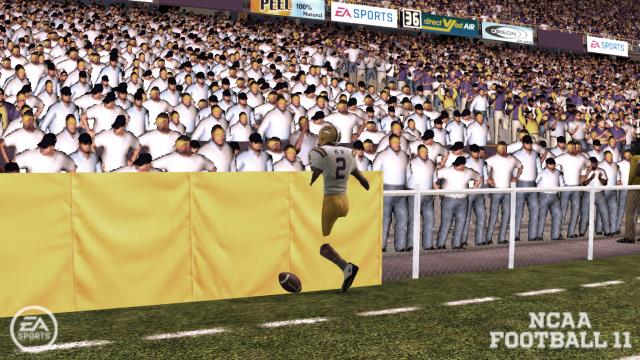 Here's a bug that never got fixed from last year. After a touchdown, various celebration animations have the players run straight through the fence around the field. Actually, this bug has been around since NCAA came out on the current gen systems. It's just kinda funny because you think the player is gonna flip right over it into the stands. 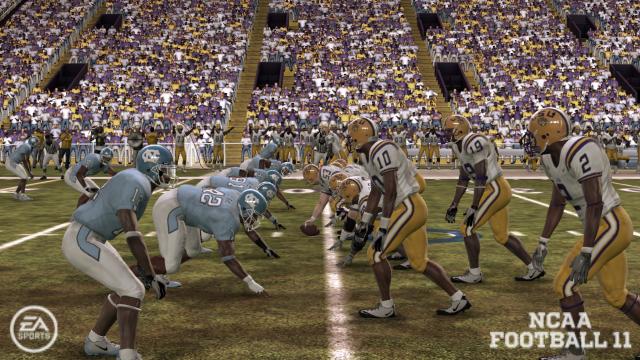 I gotta say, the new things they are doing with the lighting looks great, especially during night games. There is one thing that bugs me though. 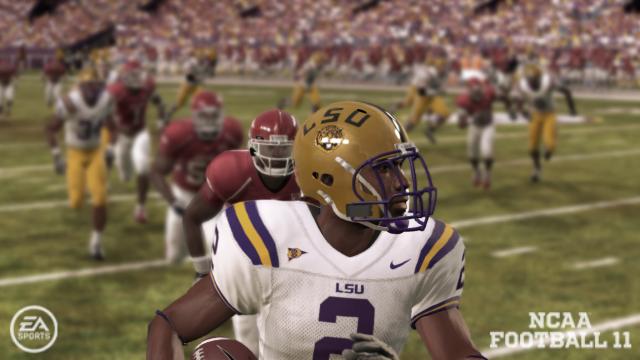 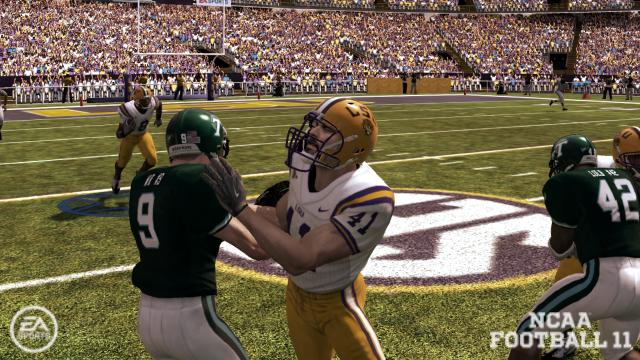 Quick, which one is normal uniform and which one is the "Old Gold" helmets from last year's Arky game? It might just be my eyes going bad, but the normal helmets just don't seem yellow enough. It could also be the new lighting tricks fooling me, but it just seems a little off.

And I don't have a picture of it, but the Tiger Band was clearly overlooked in this edition. They know both fight songs, and that's it. I don't mind the generic drum fills that play at some points, but it is a HUGE mistake that the band plays what sounds like some MAC school's fight song when we get a first down. I know there are ways to add your own sounds, but I've never really fiddled with it. If anybody knows how to put together a file for fixing that, let me know.

Aside from those few issues though, I had a blast playing it. The new playbook stuff is great, the commentary is better without Corso, but I wish there was a way to just turn Herbstreet off. And Resse's is getting their money's worth out of their sponsorship.

The running game is just as good as the demo promised it would be, with blockers accurately picking up assignments, and it's much easier to do all the advanced stuff that helps you break tackles, as I shall now demonstrate: (btw, I am becoming a fan of the All-Whites)

I should also mention that all the photos and video in this post were directly exported from the game as part of the EA online service that is part of the game. They limit how much you can put on the web at a time, but it's a pretty neat feature. And I didn't feel like fighting with crashing servers yesterday, but I'll take any recommendations y'all have about where to find a full roster. I'm looking for a 360 set in particular, but links to ones for PS3 will be helpful for others.

Now I just have to update the K&B Creoles for this year's custom teams and I'm all set.