It's not often that a fullback turns out to be a make-or-break member of your signing class. In fact, I'd say in most cases, when you start to even realize who your fullback is, you take a look back and figure out he was a lightly-ranked linebacker in high school.

But with the recent news of Dominique Allen's suspension, the importance of Brandon Worle just ratcheted up a few notches. 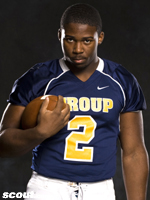 Worle (pronounced "Whirl" just in case you took to calling him "Whirly" as I did), became a popular recruit after his commitment due to his skull-crunching highlight tape:

LSU fans fantasized of having a fullback that can melt the faces off Crimson Tiders and Swampy Gators just alike. Realistically, any offense you get from your fullback is an added bonus. Most people just want a guy that will fling himself recklessly into a hole like the angriest bat out of hell you've ever seen.

From a pure football perspective, Worle's recruitment illustrates Miles' intentions to continue some form of the I-Formation in the future as well as his affinity for those hybrid big backs that can play both the FB and HB positions. Many have prognosticated that the entrance of Billy Gonzales indicates that the I-Formation may go the way of the dodo in lieu of the Meyer-styled spread rushing attack. Reality is, Miles will never completely abandon his roots: he's an old-school football guy that firmly believes in lining up and hitting the person across from you in the mouth.

Many look forward to Worle's future, but few believe he would play a prominent role in the 2010 season. FB is rarely a position occupied by a true freshman, despite the relative simplicity of its tasks. The strength required for the position often eludes incoming freshmen. With the Allen suspension, LSU better hope Worle takes the conditioning aspect seriously.

Speaking of Allen, he walked into this same situation last season: the opportunity to play (if not start) immediately. But he came into camp, just a few bills shy of JaMarcus, and made no impact upon the 2009 team. The LSU rushing attack noticeably suffered from the loss of Quinn Johnson and the lack of a true FB. Will Worle be different?

I don't think there's any reason to be concerned about his weight. Worle is currently listed at 245 lbs. at 6'2". That's hardly overweight, particularly compared to the 5'11, 270ish pound Allen. The bigger concerns will be adjustment to the mental demands. Worle has to absorb the system... and fast. He played in an option offense in high school, which typically requires simplistic reads. Can he pick up the calls? Can he remember blocking schemes?

Another incoming freshman, Travis Dickson, has repeatedly said he will have an opportunity to try out FB. Tyler Edwards is a bit of an H-Back/TE/FB hybrid that may also get a look. Yet, both of these players seem more adept at pass catching than blocking.

This isn't a great sign for the 2010 season, particularly after it seemed Allen had truly taken the reigns of the position. LSU's rushing attack last season was... impotent. Lacking a true fullback added to those issues. Can Worle be the immediate answer?

Ultimately, I think that decision is in Worle's hands. If he wants it, he can take it. Of the two returning fullbacks that aren't suspended, Richard Dugas and James Stampley, neither truly asserted himself last season. Stampley brings a facemask-breaking reputation, but he never seemed to make an impression in the playing time he had last season (though limited sample size may have something to do with that). I don't think anyone wants to walk into September 4th with Richard Dugas as the starting FB. So, unless the Allen situation is remedied sooner than later, I expect Worle or Stampley to take the field as your opening day FB. Let's just hope it's better than the merry-go-round we trotted out last season.