It's just under 6 weeks until kickoff week, so it's time to begin Season Previews in earnest. Every few days we'll preview a team on LSU's schedule this season followed by a mini round-table where we'll give you our takes on the important aspects of the game at hand. Each preview will have a poll where we'll ask you to pick the winner straight up. First on the docket, a team brimming with potential that's stuck in the ACC, North Carolina. 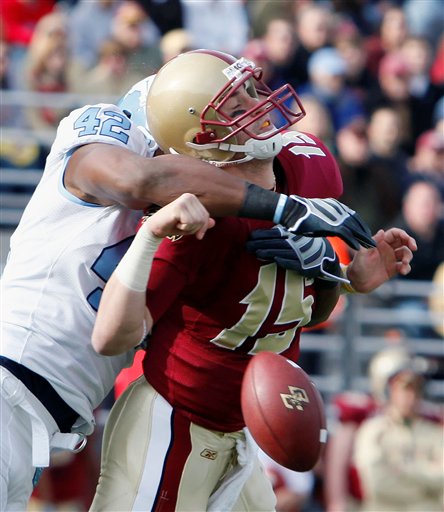 That vaunted UNC Defense (whether completely intact or not at game time thanks to possession charges and the now region-wide NCAA agent investigation) is the true problem to deal with when it comes to the Tarheels. Loaded with NFL talent last year, they all came back for one last shot at an ACC title, maybe more. By some accounts, UNC has the #1 inside and outside linebackers, defensive end, and defensive tackle, plus a top 5 free safety and cornerbacks. That's not #1 in the ACC, that's #1 Nationally. It's a defense that would be impressive in the SEC (and is probably better than some of it.) SRs Marvin Austin and Robert Quinn are scary enough especially Quinn with his 11 sacks and 6 forced fumbles. The rest of the line is full of experienced upperclassmen and behind them in the depth chart are inexperienced but highly touted freshmen. It's much the same story with the LB Corps. Led by amazingly talented seniors in Quan Sturdivant (79 tackles, 12 for a loss, 1 INT, 1 recovered fumble for a touchdown) and Bruce Carter (65 tackles, 7 for a loss, 1 Pick Six, 2 QB sacks, and a career SIX blocked kicks) and supported by Kevin Reddick, a sophomore on the rise. There is not as much experienced depth behind the starting LBs, but the freshman still look to be talented. Together this D-Line is what made UNC rate 6th nationally overall and 13th in scoring defense averaging 17 points a game, a number very close to what their offense was averaging.

There is perhaps one weakness in this defense, if you could even call it that, in the secondary. The all senior lineup is full of next level talent that is very successful at making picks and taking them back for huge yardage (19 total for the team with 508 return yards). But because they took the risks to go for the big play, they did get burned when they didn't make the INT, leading to the pass defense only being ranked 45th nationally. Davis has said he wants the defense to focus more on coverage than trying for the home run ball, and we'll find out very quickly if they players are following that mantra or not. I'm not sure either path would make it easier for the opposition. 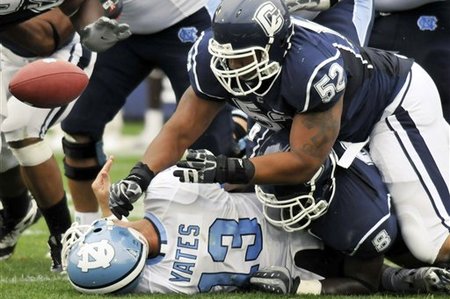 Let me paint a picture for you. A senior QB with 31 starts under him, who last year threw for over 2,100 yds at a completion rate just over 60%. Sounds like a good quarterback until you hear about his Touchdown-to-Interception ratio of 14 to 15. To put it into perspective, he was so bad UNC's basketball fans boo him. When he has the time to make the pass he's pretty accurate, but that didn't happen much thanks to a heavily Injured and inexperienced O-line that couldn't protect him and a running game that didn't get it together until late in the season. He made bad decisions when panicked, if he wasn't sacked first (24 times last season). His O-Line should be better because they will be healthy and slightly more experienced, but it should be a point of pride for our defense to utterly destroy him with sacks and INT's early and often.

It should be noted here that just like at LSU, the backup QB (or in our case, the backup to the backup QB) is the most popular guy on the team. RS Freshman QB Bryn Renner impressed all in UNC's spring game with "the arm strength he displayed, his mobility in the backfield and the uncharacteristic energy his presence on the field" his team won the spring game 17-0 and supposedly re-opened the competition for the starting job. It's hard to tell if Butch Davis is being serious or if this is just one of those Coaching Moments. In any case, Davis wont officially announce a starter till 10 days before, but I highly doubt he's going to start Renner over Yates.

If Yates does manage to get the ball in the vicinity of a man in blue, It'll most likely be Biletnikoff Award contender Greg Little (again, if he's eligible after the agent investigation) Far and away the star of this offense, last season he had 62 catches for 724 yards and 5 TDs. Thanks to a few games spent at tailback over his career, he was also a serious run threat with 29 carries for 166 yards and a touchdown. He is mostly a short yardage threat but he will occasionally go out for a long one. At 6'3" - 220 lbs and a less than spectacular 40 time, he beats defenders with athleticism that makes him tough to bring down.

So about 5 minutes after I finished writing all this, it would seem that Marvin Austin is most certainly gone for the year, with a chance that WR Greg Little, S Deunta Williams, CB Kendric Burney, or LBs Bruce Carter and Quan Sturdivant may be involved. The loss of Austin will hurt them, but that defense is still loaded and they have more than a month to prepare whomever they choose to sub in. If it turns out that more of them are involved and subsequently suspended, the entire outlook on this team changes. It may make it a whole lot easier for LSU to get a win in ATL now, but many of the questions we hoped an opening game against a tough defense would answer will remain uncertain, possibly until a game or two into the SEC slate.

If you've stumbled onto this page, go here for more recent updates

The most talented player still on this team is now TJ Yates. We should have stuck with the Tulane game....

Knowing what we know about UNC's defense (despite it's current state of flux), how do you think Jefferson will do in this game?

Billy: I think that depends on what he's asked to do. If he just has to manage the attack behind a strong running game, he'll do fine. But if he's gotta convert a bunch of third-and-longs, it'll play right into Butch Davis' hands.

Paul: For as much as Miles is criticized for his in-game management, he's shown repeatedly that when he has extended time to gameplan, LSU is typically very successful (see Auburn last year). I expect Jefferson and LSU to play well for that reason.

Poseur: Well, that’s the million dollar question, isn’t it? A lot of the season is riding on Jefferson’s development, and I think we’re all reading way too much into the spring game. UNC’s got a great defense, but it only held one FBS offense under 10 points, and that was Duke. I think he’ll have a solid day. Not a coming out party, but good.

T.J. Yates is probably the worst QB in the ACC. Will this be the night the world learns the name Patrick Peterson?

Billy: Even the likes of Chris Masson and Tyson Lee knew to avoid him last year, so probably not. But we all might hear the names Morris Claiborne and Brandon Taylor a bunch

Paul: I don't think so, but probably because of what you mentioned. They likely won't even throw towards PP. Yates is so bad, he'll presumably have a pedestrian stat line in effort to "not lose the game for them."

Poseur: The world knows his name already, so this is when they will learn the name Mo Claiborne. Our secondary should be the team’s strength.

Both teams had the same problem of anemic offense last season? Will the winner of this game be the first to 17 points?

Billy: It will definitely come down to who avoids the big mistake. Given Yates' propensity for turnovers, I don't think UNC wants to play catch-up.

Paul: Yeah, I expect low-scoring. But if anyone is going to take off, it will be LSU. Way more potential for their offense to blow up.

Poseur: It better not be. It’s no secret that I’m no fan of Gary Crowton, but it’s time for him to reward the faith placed in him this offseason. On a fast turf, we better score some points, even against UNC’s vaunted defense.

Both fan bases are looking to this game as a barometer for what to expect for the rest of the season. Aside from a win, What do you hope to get out of this game?

Billy: This fan base just needs a football game they can feel positive about. Of course, whether the Tarheels are at full strength will play a role in that. But even in last year's patsy games, LSU couldn't get rolling. It would just be nice to see the Tigers start the year off looking like an upper-echelon SEC football team.

Paul: A consistent offensive gameplan. Physical offensive line play. You'd love to see Jefferson come out and have a monster game. But that's asking for too much I believe.

Poseur: A functional offense. Last year’s offense was atrocious, keyed by lousy line play. We better see some improvement from the line and some bona fide sustained drives. A big play or two would be nice, as well. This team is too talented to have an offense worse than Vanderbilt's