Les Miles just wrapped another successful summer camp, which was attended by an impressive list of prospects. They received good news on Monday, when White Castle DB Ronald Martin committed. Many expected to receive additional commitments but as of right now, no one has pulled the trigger. Beyond the Martin commitment, LSU offered a few more scholarships for 2011 (and even one for 2012) and put themselves in great shape to land commitments from some stellar in-state players. Let's take a quick look at everything that unfolded. 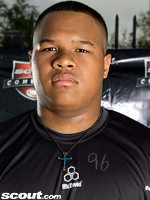 As you can see, most of the talent was of the local variety, but there were some nationally ranked out of state prospects on hand as well: Joe Morrow & Hakeem Flowers.

-It's been said before, but the commitments for the 2011 class and a lot of the guys from Louisiana share an extremely strong bond. It seems unlikely that there will be any Trovon Reed type defections from this year's class, because the big dogs (A. Johnson, Collins, Landry) are intent on keeping everyone around. There's a deep bond of friendship there, and it is really attractive to uncommitted guys.

-One of those guys is Mickey Johnson. Johnson boasts an extensive offer list, and he's not one to shy away from interviews, often proclaiming new and different favorites. Johnson is a military brat, so his bond to the state may not be as strong as others. However, after camping this week, he seems bonded to the commitments more than ever. The notion that this could be a special class is very appealing to Johnson.

-Two new 2011 players earned scholarships this week after impressive showings: Paul Turner & Jalen Collins. Turner is an athletic guy who plays QB for West Monroe, and from many reports was the most impressive player on the field in the Dome last year. He's too small to play QB at the next level, but LSU has offered him at WR/DB. Collins is a tall corner prospect that recently moved to Olive Branch High School. There's a pretty healthy competition going on for the other defensive back spots in this class. Many expected Floyd Raven to earn an offer this week, but injury kept him from participating during much of the camp. Bakari Hollier was really impressive in camp, but didn't earn an offer just yet.

-2012 DB Terry Richardson from Cass Tech High School (same school as Joseph Barksdale) earned an offer. Alabama offered him recently as well. Looks like he should be a big-time prospect. He will be attending the LSU/UNC game in Atlanta as well.

-Two big names to watch in the next week or so are Phillip Ely of Tampa, Florida and David Jenkins of Hebron, Texas. Jenkins should pledge within the week. Ely is a 4-star QB with a Matt Saracen-like story, that ranks LSU in his finalists. He wants to make a decision next week. One additional guy that LSU may net is Ronnie Martin from South Carolina. Martin is a nationally ranked safety prospect with ball-hawking skills. He named LSU his favorite and said he wants to make a decision at the end of the month, after camping. We'll see if he sticks to that tune.

-Tiger Sports Digest has a nice, free gallery of many of the commitments.