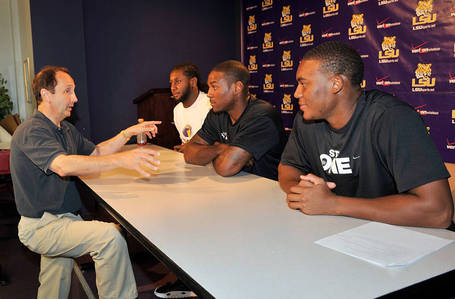 Very slow today as Miles and a few Tigers head to Hoover. LSU is scheduled to go second in the morning session, but guessing exact time isn't really possible. The main room appearance live on ESPNU should be around 11 or noon, with the secondary room appearance that will be streamed live HERE to follow shorty after. I'll try and get audio or video up here as soon as possible. Again I highly recommend the SB Nation coverage found at EDSBS, the Spencer Hall and Holly Anderson Twitter feeds, Team Speed Kills, and the main SB Nation coverage page.

The life of a beat writer isn't as glamorous as you would think. Take for instance the case of Jim Klienpeter at the Times-Pic, who continues his series of web videos shot from laptop webcams in precarious positions. Watch out, Ivan!

(Lest anyone think I'm giving the man a hard time. Klienpeter, along with James Varney do excellent work. It ain't their fault the Times-Pic wont give them the proper equipment.)

A correction from from an earlier story, McNesse St. has more tickets to sell because they had already sold out of their allotment and requested 2,000 more, an unheard of number for an in-state opponent.

Harry Coleman has been waived by the Saints and remains unsigned.

Matty Ott and Tyler Hanover have been named to Cape Cod League All-Star Team. Don't panic, they will both return next season.

The Ranaudo - Red Sox stand off continues. A video update after the break.