It's just under 5 weeks left in the offseason so we continue our series of season previews leading up to kickoff week. Every few days we'll preview a team on LSU's schedule this season followed by a mini round-table where we'll give you our takes on the important aspects of the game at hand. Each preview will have a poll where we'll ask you to pick the winner straight up. Next up, everyone's new favorite SEC team, Vanderbilt. 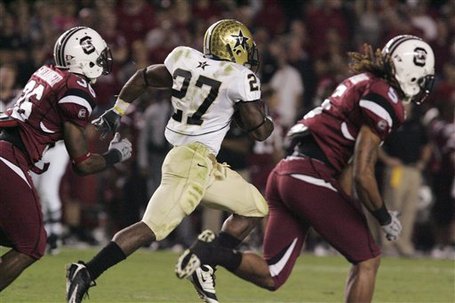 Easily Vandy's star player, Soph RB Warren Norman is a back that could start on any SEC roster (except maybe Bama.) A true playmaker, Norman, in tandem with Soph Zac Stacy, led a running game that was the only successful part of Vandy's offense last season. The 2 of them combined for 1261 yds and 6 TDs, with Norman averaging 5.4 yards a carry. He was no doubt aided by a solid if not overly impressive O Line that did their best while the rest of the conference loaded up in the box, paying only mild lip service to Vandy's bad passing game. There is cause for concern, however, because Vandy will be replacing 4 of 5 starters on the O Line. While none of these starters is a freshman and most are well touted and have seen some playing time, that is quite a bit of experience to replace. I have a hunch though that Robbie Caldwell, even with his recent promotion to HC, will have them ready to keep that running game going again this year.

Warren is a stand out from Vandy for another big reason. 1,050 return yards, averaging a little over 26 yards per carry and 3 return TDs, one each against SCar, GT, and Army. It gave him 1,941 all-purpose yards, more than enough to beat Herschel Walker's freshman season record. He will likely give more playing time in this position to Zac Stacy, who wasn't bad himself in the return role last year, but if they need a big play to give them a spark, watch out for Norman. There's a shot of him running it back in these highlights of the Vandy-SCar game from last year. 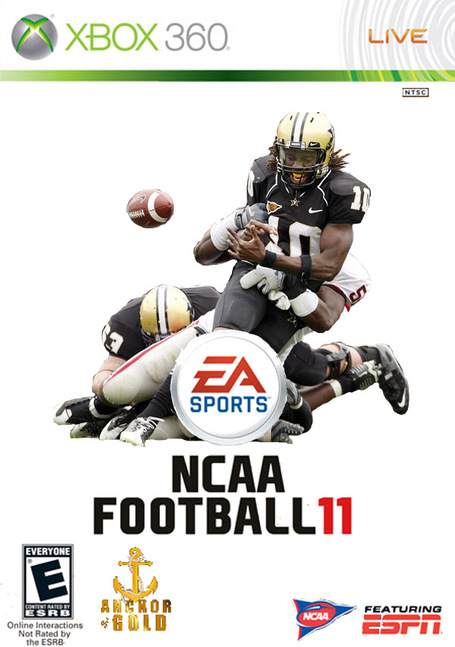 There was a great point made in the now legendary Turkey Insemination speech at Media Days by new HC Caldwell. Larry Smith, despite an excellent performance in Vandy's first bowl appearance since '82, was essentially a freshman last season. Even so, the dual threat QB may continue to be the main weakness of the Commodores. Last year, in a season that ended early in the 9th game against GT with a torn hammy, Smith had just 1126 yds passing, a completion rate just over 46%, a TD-to-INT ratio of 4 to 7, and, most disturbing, 20 sacks. I've already praised his O Line, so as you might guess the problem is with Smith's dual-threatedness (<---new word). With few exceptions, Smith never really succeed when running, gaining only meager yardage and a few times averaging negative yardage. The worst was a -20 yds, -2.2 per carry day against Southwest Conference powerhouse RICE.

The stats show the other problem, he's not a good passer. His receivers have great speed, but Smith can't throw the deep ball so their talents were wasted. Go-to target John Cole only had 36 catches with 1 TD on the year but was athletic enough to average just over 10 yds a catch. Frankly, these receivers need a better QB to be successful. With SR passing QB Jared Funk having an impressive spring and the arrival of JUCO Champion transfer Jordan Rodgers (yes, that Rodgers), it's easy to see what the 1st big personnel decision Caldwell will have to make is, especially if things don't improve quickly.

I haven't mentioned Vandy's D yet, and that's because they are a little difficult to peg down. There is a lot of talk about how speedy and athletic the line and linebackers are. JR LB Chris Marve stands out as a leader with 121 tackles, over 6 for a loss, a sack, and a couple forced fumbles. But last year's weak pass rush and inability to stop the run (opponents gained an average of 197 yards per game on the ground) make me think that "athletic" is really just a kind word for "undersized" (say's the man who's own defense looks to be very "speedy" this year) There is alot of experience returning, but it's not alot of good experience.

Their secondary is also hard to judge. Certainly it will be weaker without 3rd round draft pick CB Myron Lewis, but JR Casey Heyward did well when tested last season and should fit into the starting role nicely. Already starting a RSFR, it's not a very deep unit, and there are genuine concerns that those returning are not as advertised. They had a nationally top 10 pass defense last season, but the numbers are full of bloated stats against weaker teams. The stronger SEC teams were able to pass at will when attempted but preferred to take the path of least resistance against the weak run defense.

It's tough to decide what to make of Vanderbilt. I'm not saying they have a serious shot at an East crown, but I also don't think penciling in another 2 win or worse season is the right answer. Until the passing situation changes (by smith's improvement or otherwise), they will lean on their run game. With a D that is very questionable they could fall behind early a lot and never catch up. Warren Norman, through running and the return game, will have to carry this team and hope that he can hold it up until he gets some passing support. With it, a few wins are possible and maybe even an outside shot at a bowl if we are being extremely optimistic. If it never comes, I fear we'll unfortunately have to see that ugly side Caldwell warned us about. Which is a shame, since it only took him a week to become the most liked coach in the conference by a very wide margin. I have a feeling that every fanbase in the SEC will be pulling for the 'Dores this year, but goodwill isn't enough to win football games. Lets enjoy the good times as long as we can.

This game should be a good time to work on any Running Game wrinkles we need to iron out after they work/don't work against UNC. Good time to see some Russel Sheppard direct snaps? (or give some other element of the running game you hope to see take the spotlight here)

Billy: Watching the Mississippi State ’09 replay only cemented for me that the most important thing for this team in September (aside from winning, obviously) is establishing an identity on offense. Is LSU going to have a power rushing attack? A spread one? More of a spread passing offense? Regardless of what works/doesn’t work against UNC, it’s just important for this team to find out what it does well and commit to doing those things consistently.

Paul: I'm not sure Shep will see any more snaps this game than any other, mostly because I'm of the opinion that he'll be a vital cog in our offense from day one. They may try a couple extra trick plays, but I don't think he'll see an enormous jump in touches.

If Larry Smith hasn't been benched yet, It should be a game to pad some defensive stats. More INT's or more sacks?

Billy: Give me the sacks. That and more pressure in general will lead to more interceptions and more turnovers in general. I think we all recognize the secondary’s going to be loaded this year anyway. The front seven needs to get them some good pitches to hit (to use a summer term) – i.e. some hurried passes.

Paul: INTs. We had trouble sacking him last year it seems (though we had three), but I think the newer, athletic bodies up front should significantly improve our pass rush. But as a result, I see a lot of forced turnovers coming. This could be a bigger statement game for our defense than offense.

I've made it pretty clear that Vandy's pass defense is overrated. Do we press the matter and showcase JJ's improvement?

Billy: Barring some sort of provocation, Miles has never approached these types of games with a "showcase" mentality, so I doubt that changes in week two. It just goes back to my first point. Find what you do well and work off of that.

Paul: They should. JJ needs a couple good games under his belt to satiate the fanbase/press and build his own confidence. Let's say he has a very solid outing against UNC and follows that up with a huge game against Vandy... I think a lot of people would turn much more optimistic. He's a junior now, with over a season's worth of starts under his belt. In the words of Les... "Let'er rip!"

Billy: Great is a given. But for my money a press conference has to cause a little more righteous indignation to get in the Greatest conversation. Now, if we could have heard a recording of Shane from Centerpoint calling in to the Paul Finebaum show to tell us all about Nick Saban’s superior turkey-pleasuring skills compared to Caldwell’s, then we could talk Greatest.

Paul: I always associate any conversation about inseminating turkeys with the adjective: "greatest."