It seems it has been years since LSU lacked depth at the WR position. More often than not the discussion has started with, "What are we going to do with all these talented WRs?" But heading into the 2010 season, LSU's WR corps consists of a) A proven veteran, b) A talented but largely untested sophomore, c) A silky-smooth QB convert, d) A speedy RS sophomore who has yet to make an impact, and e) A bunch of freshmen.

The talent level is undeniable, who will step up? Who is going to emerge? If you had to put money down, Kadron Boone may not be a bad bet. 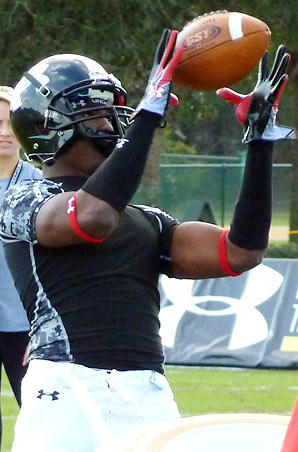 If you aren't already thanking Billy Gonzales every night during your nightly prayer routine (I'm assuming you all live by these principles), be sure to add him to the docket. Boone being at LSU is almost exclusively a product of Billy Gonzales being at LSU. Boone gave LSU an early look, but only emerged again late in the recruiting season and finally pulled the switch from Texas Tech to LSU on National Signing Day.

Boone joins an already large class of wide receivers consisting of : Tharold Simon, Jarrett Fobbs, Ronnie Vinson (potentially), Armand Williams and James Wright. The first three of the list are moveable quantities that could wind up on either side of the ball, the latter two and Boone are all WRs exclusively. Signing six players at a single position is a pretty rare event and a definite sign of need. So of the six names, what makes Boone the likely candidate to emerge?

Let's start by eliminating the others. Vinson is likely going to be on defense. Fobbs is a likely RS candidate to add muscle. Armand Williams is a player LSU took a late flyer on based on athletic potential. Safe to say he is a likely redshirt candidate. That leaves Wright, Simon and Boone. Simon is probably the most athletically gifted of the three, but the least polished as a WR due to the fact that he played all over the field in HS. Wright is a big-body WR, but is probably a better blocker at this point than Boone (which may actually earn him playing time, but in a different capacity).  So that leaves us with Kadron Boone.

The Tampa product isn't the type of guy that will blister up the track. He's listed at a 4.55, but he's likely a tick slower. He's not overly big (listed at 6'1, 190), but has quality size and looks bigger than listed. But what he lacks in pure physical ability, he makes up for in being refined. Watch the tape (or this one, or this one), and you'll see a player that is a great hands-catcher that can really go up and get the football. I love his body control and field awareness, and there's more than a few clips of him toeing the line and making tough catches in the corners of the end zone. He also brings the added dynamic of a ST returner, so that may put him in line for some early PT as well.

I would like to see more film of Boone's route running ability, but what I see of his physical attributes makes me believe he'll be consistent in that arena. He's quicker than fast (though he doesn't seem to struggle with running away from Florida competition) and he show good stop/start ability. Mostly what I love is that he plays so under control. Usually players like that transition to good route runners because they understand how to use their body and their strengths to their advantage. The one play he runs consistently on tape is the slip-screen (which hasn't been nearly as prevalent in our offense since Jimbo left), but he may have some opportunities to try that out in 2010.

He flashes extremely strong and dependable hands, and that's usually a ticket to getting on the field. Can LSU throw him out as a 4th WR in a package and trust him to make a tough catch? I think so. Could they feel the same about any of the other WR recruits? Well, there's no way of knowing, but the tape on Boone gives us the most to believe in. He's got good enough size, dependable hands and runs with a lot of strength for a wide receiver. There's a lot to like with Mr. Boone, particularly the way he competes for the ball. We should have a better idea of who will play in 2010 in the next couple of weeks, but I won't be surprised if we see Boone in a few packages this year.