Near the end of January, LSU fans were up in arms with the conclusion of the 2009 season and staring at a recruiting class that was seemingly falling apart. WRs Justin Hunter and Mike Davis jumped ship and many of LSU's top remaining targets were flying off the board. LSU seemed destined to fall short in the hunt for DL, a position of major need. In-state WRs began looking around. In short, we all ended up something like Ari Gold after he was fired.

But on January 28th, things took a turn for the better, when Tennessee commit J.C. Copeland took a visit to Baton Rouge with his high school teammate and LSU commit Brandon Worle. A previously off-the-radar player suddenly became the eye of message-board affection, attracting attention with his eye-popping film. Two weeks later he pledged to LSU. But what can we expect of Copeland at LSU? 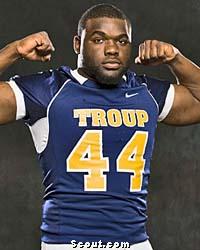 Can J.C. Copeland carry his HS dominance to Tiger Stadium?

When you watch the tape, there's a lot to love about Copeland. He's explosive off the ball and aggressive. He plays with an attitude and knows how to deliver a punishing blow. He does an outstanding job of locating ball carriers in the backfield and making stops behind the line of scrimmage. He fires off low and plays with good leverage. While he may not possess prototypical size, he uses his short, squatty build to his advantage, getting under the pads of blockers and shucking them off. He makes good use of his hands, which is promising for an undersized defensive tackle. These are the things you love about Copeland.

However, the major question mark is his size. His recruiting profiles list him anywhere from 245-260. LSU's roster lists him at 6'1, 290, which is probably his optimum playing weight, but he looks extremely thin, as you can tell from the photo above. I have no doubt that Copeland has added a few extra lbs., but is he truly up to 290? I had a chance to interview him a few weeks back and he claimed he was at 295. We asked him why he felt some schools overlooked him, and he said specifically his size. This is obviously the biggest question mark surrounding Copeland.

If Copeland can continue to add muscle and bulk without sacrificing his supreme quickness, he can be a real force in the middle of LSU's defense. Ideally, he'll turn into an up-the-field attacker that wreaks havoc on opponent's backfields for the next four years. He seems destined for a redshirt year, particularly considering LSU currently boasts six bodies that can play inside (Levingston, Nevis, Brockers, Davenport, Downs, and Logan).

Could he end up being a DE? Well, he's currently listed at DT, but if they find out he can't hold 290 in a good way, they may choose to keep him around the 260s and play him on the outside. Or what about MLB? On tape, he looks to have the short-area quickness required of a MLB, but I'm not sure he possesses the sideline-to-sideline speed to man the middle of a defense that Chavis typically admires.

Ultimately, I think Copeland can be a tremendous player.This blog boasts of Copeland having 5-star talent. I'm not sure I can agree. His tape is certainly awesome, but judging a player by tape alone can be deceiving. Copeland obviously possesses superior quickness than his HS foes, but it's much easier to mask a lack of bulk when you are going against very few 300 lb. OL in HS. In college, he'll face players with comparable quickness AND superior bulk. Can he add the muscle necessary to be the same type of impact player? Can he still be a penetrating force even without ideal bulk?