As LSU fans, we are fortunate that we get to choose and pick from most of the nation's elite while also having a backyard chocked full of insane D1/NFL caliber athletes. This spawns a passionate sect of LSU fans who are true Louisiana loyalists, down to the "our 3 stars are better than your 5 stars" attitude. Why waste time recruiting so and so from Tampa, when we can get someone better from Natchez? That may be a bit of an exaggeration, but their feelings aren't without some merit.

Tharold Simon is a shining example of stellar Louisiana football player who may outshine some more prominent OOS studs. Simon was the first commitment to the class of 2010 and a little bit of an unknown at the time. He hailed from a small, 3A high school outside of Lafayette. He played both ways. And his 6'4 frame made people believe he could be in line to be the next great tall receiver at LSU, or a freakishly tall corner prospect. And... that he may be an academic risk. 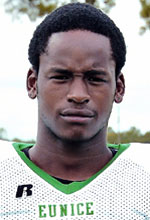 "What the hell you looking at?" Simon is a prime candidate for future mustache wearers of America.

Fast forward to the end of July, and it appears Simon is good-to-go academically, and he didn't leave behind his physical skills. As the season progressed, we learned more and more about him, particularly that national scouts were enthralled by his supreme athleticism. You turn on the tape, and it's obvious the kid can play.

He's a lanky, rangy kid that may lack elite timed speed, but is deceptively fast due to his long striding. What I love about two-way athletes is that they typically step on campus with a higher football IQ. Simon looks equally comfortable as both a free safety on defense and a WR on offense (more on that later). On defense, he's a ball hawk, often batting down balls or intercepting them, but is equally adept at coming up and delivering a blow in run support. This kind of physical mentality should help him to see the field early not just as a special teamer, but as a blocking WR.

As for his WR skills, most of the tape I've watched he's only catching short passes, almost like slip screens (except the scheme seems to be less "screen" than "get the ball to Tharold and see what he can do"). He shows pretty good quickness in making the first guy miss and rarely goes down on first blow. He may be thin, but he's tough. However, we cannot really determine what his route running acumen may be. He could be a natural, but from the looks of things, he'll have to make some significant progress in that arena before becoming a contributor. Thankfully, we have Billy Gonzales to teach our WRs which foot to lineup with (if anyone can link me this article, next round's on me). Regardless of route running deficiencies, he can catch (shown on defense and offense) and he knows how to use his body (shown on defense and offense) to shield away defenders and go up and get the ball.

As for his future at LSU. On NSD Miles first commented on Simon's height and then mentioned that he gives LSU options but would likely start out on defense. Lo and behold, the first roster drops and Simon is listed as a WR. Needless to say, I think this is the right decision for multiple reasons. Namely, LSU is dangerously thin at the WR spot and Simon may be able to play early there if he comes in and competes. However, while I'm willing to heed to the wisdom of experienced coaches, you don't often see 6'4 corners or safeties on the field. Tall corners tend to have trouble turning and running, and are usually only useful as nickel backs or in specialized roles due to that reason. Tall safeties are... pretty much non-existent. Honestly, I can't even think of a 6'4 safety in the NFL from the past 5-10 years. If one of you crack NFL fiends can provide me a link, I'll buy another round.

All that being said, it's nice to know we have an athlete in Simon that offers that sort of versatility. Despite the fact that he is ranked as a 4 star, I can't help believe the recruiting services missed the boat on him a bit. On Rivals, he's 192 of the top 250. Respectable, but not earth shattering. From what I've seen and read, Simon is a top-100-type athlete, with serious potential to grow into a dominating player. I also think a mustache would complete his look.