It's just under 5 weeks left in the offseason so we continue our series of season previews leading up to kickoff week. Every few days we'll preview a team on LSU's schedule this season followed by a mini round-table where we'll give you our takes on the important aspects of the game at hand. Each preview will have a poll where we'll ask you to pick the winner straight up. Next up, the reason why the SEC revises the Artificial Noisemaker policy EVERY YEAR, Mississippi St. 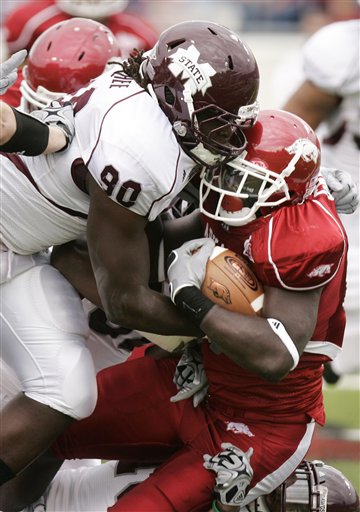 MSU's defensive line could be one of the best in the conference, and it all starts with DT Pernell McPhee. A great outside pass rusher last year but often working by himself, McPhee and the other speedy DTs and LBs like Fletcher Cox and K.J. Wright should get a huge benefit from being under a new DC in Manny Diaz, who looks to put more emphasis on aggressive pass rush. The line returns some solid starters and they have also added a "Fridge Back" in 6'7", 345 lbs. DT James Carmon who will sub in for a few plays as a brick wall to stop the run. They do lose LB Jamar Chaney and DB Marcus Washington, their defensive leaders from last year, but the rest of the lineup is full of experienced guys who will all be battling hard to get or keep starting spots. Now, a lot of this hype is based on potential, not results. The stats for the Secondary are not impressive, but then again they did have to face 2 of the best college passers last year in Ryan Mallet and Case Keenum from Houston. Even so, I think this defense has potential to be great this year and will be a great test to see if our sack issues from last season have been fixed. 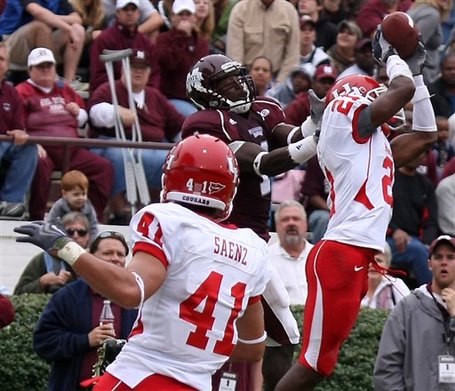 The MSU receiver in his natural habitat, flailing helplessly during yet another INT

There are a lot of folks who also see improvement coming for MSU's passing attack, but I don't buy it for a second. Granted, losing Tyson Lee and his 4-14 TD to INT ratio should make things less embarrassing, but he also had 1444 yds, a completion rate near 60%, and a 6.5 yard average. They won't get anything like that from JR QB Chris Relf, who was mainly brought in as a rushing QB last year (though Relf's 5 passing TDs on minimal yardage give them an extra wrinkle down near the goal line.) It's telling that Mullen has announced plans to make last years leading receiver Chad Bumphis take more snaps as a RB this upcoming season, leaving Marcus Green, last years close second in stats, as the main threat. What's left as a real passer is the unknown potential of QB RS FR Tyler Russell. Add to that a heavy O Line that allowed 20 sacks last year and I see a recipe for disaster through the air. And be thankful we play them early, because when things do go south, you'll be sure to hear a second story about "Mississippi" "Starting QB" and "Farve." 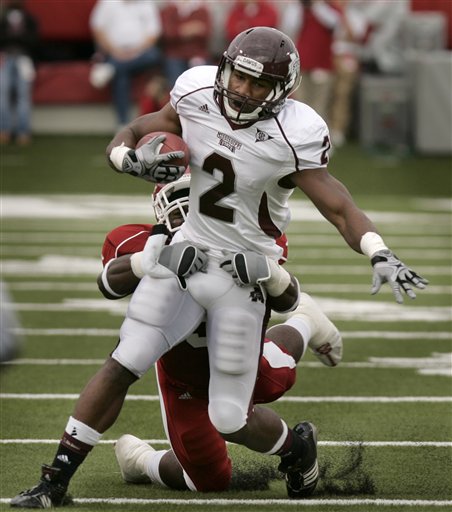 All that's left of the '09 Bulldogs running game, Robert Elliott

After what seems like a decade of great running backs being the only thing going in Starkvegas with Jerrious Norwood and Anthony Dixon, MSU returns only their 4th leading rusher in JR RB Robert Elliott. In fact, he's the only RB of any real statistical significance left from last season. Replacing Dixon's 1391 yds, 5.4 ypc, and 12 TD's (which was more than half of MSU's scoring last year) will not be an easy task. He won't be going it alone however. With '09's 2nd leading rusher in QB Relf moving into the starting role, the Bulldogs will remain a team that prefers the ground game, so Elliott will get the touches. Behind him in the depth chart are just a few big name freshmen, but the guy who's really gunning for his job is Vick Ballard, a Juco transfer who had a hardly-believable 1728 yds and 22 TD's last season. Behind an experienced O Line that is still built more around lane-making than pass rush defense, Elliott and Ballard both have a chance to shine. But replacing Dixon will prove a difficult task.

In the slop of Starkvegas last year, this game was a bit of a wake-up call for the fan base. I used to love destroying these guys in the '00s. Barring a flooded Death Valley, do you see another tight game or will we give them a beating for old time's sake?

Poseur: LSU has beaten MSU 10 straight times, and 17 of the last 18. And only a very few of the games have been close. Sure, they might put the fear of God into us again, but I have a hunch we'll be a little more focused for this game. If I were a betting man (cough), I'd be confident LSU will cover whatever spread is set for this game.

Billy: If I had to guess, I’d go with a game that’s tight early before LSU pulls away in the second half for a comfortable win. Nothing extreme, but never really in doubt either. Keep in mind, as bad as things were last year in this game, without two or three special team blunders early, LSU would have had a comfortable two or three score lead most of the game despite not playing well on offense at all.

Paul: I expect a good old fashioned ass kicking. I know Dan Mullen is doing good things in Starkville (is there such a thing)? But they lost their best offensive player and simply don't have the talent to just reload. I think they'll be an improved team next year, but improved won't beat LSU. Even still, Dan Mullen may take this game as an audition for the LSU gig ( know, bite my tongue). If MSU beats LSU, that is beginning of the end of Miles and you'd have to think Mullen would be a top candidate.

Dan Mullen is supposed to bring the Urban Meyer Spread to MSU. Do you think he has enough of the personnel for us to see some of it now, or is the Great Bulldog Uprising still a few seasons away?

Poseur: Still a few seasons away. Seriously, what has Mullen really done? Not gotten blown out? Let's be honest, he took a 4 win MSU team and made them a 5 win team. Woo hoo. And now his workhorse running back has graduated along with the senior QB? Let's just say I don't think MSU should be making bowl reservations just yet. Right now, the Mullen Era is primarily hype. Croom won 8 games in his pentultimate season, so I'm as yet unconvinced Mullen is a huge upgrade from Croom, who got a bad rap in his last season.

Billy: It was interesting to see Mullen kind of develop a more power-oriented version of the Meyer offense last year, and if I had to guess it’ll be more of that this year. It fits their personnel better – the only real Florida-esque guy they have out there is Chad Bumphis and he can only do so much. Until they can find more guys like him, it’ll still be three-yards-and-a-dip-of-skoal.

Paul: Likely still a bit off. Not landing Cameron Newton drastically changed the outlook of their season. While I don't think Newton will make much of a splash at Auburn, he could have been a threat at MSU which Mullen's familiarity with him. They still have no solution at QB. Their RBs are less talented, though they do have some nice youngsters. Chad Bumphis is a nice, versatile threat outside, but his abilities are dwarfed by the lack of surrounding talent.

MSU got picked last again in the West. Any chance of them being higher than that at the end of the year?

Poseur: Sure. Anyone can finish higher or lower than their predictions... these games are't set in stone. It just ain't all that likely. Maybe they catch Ole Miss this year if the Rebels have a spectacular flameout, and maybe Auburn or Arkansas' defense sinks their respective seasons, but the chances are good that the Dogs will be in last again.

Billy: Empirically, there are definitely things to like about State – they have talent on the offensive line, some decent backs and a solid front-seven on defense. But at the same time, it’s State. Whatever happens, they always seem to just "find a way to lose." But I like the job Mullen did last year and it wouldn’t shock me to see them improve. The scary thing is, the SEC West is going to be such a Donner Party death trip this year that the last place team may end up, in reality, still being one of the top 60 or so teams in the country.

Paul: Probably not. But they won't be THAT bad. They nearly stole games off LSU and even UF last year. I could see them playing a lot of teams very close, and perhaps even stealing an upset or two. But when a team as talented as LSU is predicted to finish 4th in the West, it's hard to fathom how a team with inferior talent could keep up.

Pick an SEC team and give them a new "traditional" noisemaker that would get past the rule.

Poseur: Well, the vuvulzela thing got stopped, so I think we should just bring in maraccas. Or allow Tennessee to bring in muskets.

Billy: Well, Ole Miss can’t seem to hold on to any of their "traditions," so they might as well start a new one. Maybe some duck whistles whenever Mr. Massoli gets in the game?

Paul: Does the vocal majority of the LSU fan base count?