Let's all stand up and give Don Yanowsky a big round of applause. Thank you, thank you, the three of you can now sit down. I've seen the question raised on more than one occasion... "So what, exactly, does Yano do?" Sure, he was designated as TE's coach. But we saw a year of the least TE production we've seen in ages in that time. Besides his Paulie-Walnuts hairdo, it was hard to really tell what The Last Don contributed, besides being the ultimate closer on the recruiting trail. So why, exactly, are you three applauding again?

Enter, Nic Jacobs. Yano is long gone from LSU this season, but signed, sealed, delivered is the 6'5, 250 lb. TE prospect out of Many, Louisiana. But is his future at TE? To quote a dear friend... "Not so fast, my friends..." 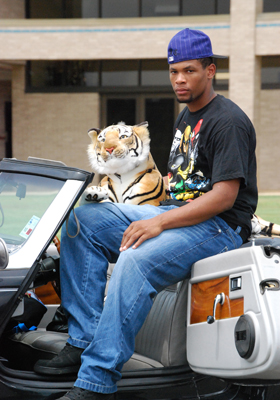 This has to be one of the best recruit pictures of all time. It looks like the cover of the latest offering from Juvenile, and I mean that in the best way possible. P.S., if you plan on Googling Nic Jacobs for pictures, make your parental settings are high, or you may end up with something unpleasant.

Jacobs ended the least suspenseful recruiting battle in history on January 22nd of this year, when he pledged to LSU. His Rivals profile claims no other offers, but I think that is more a product of him not listening than him not drawing interest. Jacobs wanted LSU from the beginning. This is the kind of guy that makes fans happy because he "bleeds Tiger's purple." But... what kind of football player is he?

Well, the first thing you notice about Jacobs is his massive frame. 6'5, playing at about 250-260 is a big, big kid, particularly to be playing TE. The fact that he plays TE in high school and not OL is a testament to his athleticism. You can tell from the tape that Jacobs has the athleticism to get down the field and block. This causes many to believe that Jacobs will be a jumbo TE for LSU, used specifically for run-blocking purposes and occasionally as a pass catcher (think Keith Zinger). I, however, have other things in mind.

When I look at his frame and his athleticism, I can help but imagine a future OT. Many a TE have converted to successful offensive linemen due to their superior footwork and ability to add positive bulk. Jacobs is a big, bulky kid, but not chubby or out of shape. He's got all the room he needs to add 40-50 more pounds of solid muscle and bulk to be the size of an offensive lineman. That's what I see. A 6'5, 310 lb. Nexus 6 ass-kicking machine that even Harrison Ford would run from. I see Nic Jacobs being Brock Lesnar in football pads (maybe that's a bad analogy).

But what could stop him from reaching that? Well, multiple people testify to Jacobs relative lack of effort when playing. However, the same criticisms were made of Lavar Edwards coming, and he's adapted just fine. Even on tape, you can tell Jacobs doesn't exactly go full-out on every play. Now, the question is, does this stem from laziness? Jacobs is noticeably larger and more athletically gifted than much of his competition. He's capable of dominating opponents more or less by showing up. Could this be the reason for his lack of effort on every play?

Regardless of the reasoning, that's an aspect of Nic Jacobs' game that must change. He won't be able to simply out-athlete neither his future teammates nor future foes. For Jacobs to grow into the monster blocking machine that I think he can, he'll need to develop a relentless motor and nasty mentality. Hopefully the increased competition at LSU will draw out those attributes.