Share All sharing options for: Link Gumbo 7/6/10 - The End of The Bertman Era 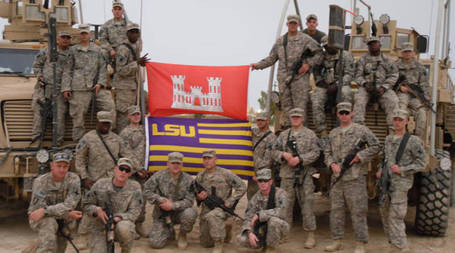 The 256th Brigade of LA National Guard. image via LSUSports.net

A benefit soccer match was held over the weekend in Lafayette to raise money for the family of LSU soccer player Kellie Murphy, who are looking at some very heavy medical expenses in transporting their deceased and injured children back home from South Africa. Brian Murphy remains in critical condition and in a medically induced coma. Donations are still being accepted at Home Bank.

Chad Jones was moved to Presbyterian Hospital in New York last week and will continue to undergo surgery for the next few weeks. It has been asked if he will ever play again, but all parties are declining comment until he is finished with his surgeries.

I failed to mention this while on the road, but as of July 1st the Skip Bertman Era of LSU is officially over after 27 years of coaching and administrating. And for retirement? Let's just say the Tigers may be swinging Marucci in the near future.

CPM was recently presented with a signed flag from the LA National Guard by Cpl. Brandon Spillman who was in town on leave. Always great to see the support from the 256th, who I believe is still mostly made up of residents of the LA Gulf Coast area.

CPM also received a letter of intent from Jordy Snikeris, a SP catcher from Texarkana JC. There will be plenty of competition to fill the pads of Gibbs next year. CPM has also received transfer papers from Tulane 1B/DH Jamie Bruno and UNO P/INF Kevin Berry.

It was said by nearly every local I ran into last week that the neighborhood just didn't have the same atmosphere without LSU or Texas there to tailgate. Seems that goes double for the TV audience. BTW, What a great game to send the 'Blatt out on!

Speaking of the 'Blatt, Matt Gaudet will finally have an at-bat there as he will play in the College Home Run Derby this week, along with his pitcher Buzzy Haydel.

Even More Baseball news: Grewe and Sanchez are not headed for Notre Dame. (small world: most likely candidate now is the HC at LA Regional opponent Kent State)

The busiest man at LSU right now is Ass. AD Verge Ausberry who is in the uncommon position of trying to fill in LSU's open date for 2011's opener. All signs point to a Neutral site game at JerryWorld in Dallas with potential opponents Oregon, California, or (GASP!) a Tubberville-led Texas Tech.

The Advoc ran a great profile of Redemptorist's La’el Collins, the No. 1 OT prospect in the nation and a big part of LSU's '11 class.

CTJ gave an update on the team for the SEC summer teleconference, LSUSports.net has the transcript.

The Ole Miss Fightin' Calamari continue their search for a new mascot, and the list of potential candidates is exactly as lame as you would think the group of self-important 20 year olds who gave us the magnolia bowl would be. (And let me remind you all that ATVS will continue to exclusively refer to all Ole Miss sports teams as the Fightin' Calamari until a mascot is chosen.)

How many UGA fans do you think wish it was Michael Adams instead of Damon Evans who was on his way out the door today?

Finally, in some sad but inevitable news, Ed McCann, the head coach of Centenary Baseball, has resigned. In over a decade of coaching the Gents, McCann did manage to steal away a few of those frustrating mid-week losses (though none since Mainieri has been our HC). McCann is headed for the greener pastures of Bama A&M of the SWAC while the Gents head off to the sunset of D-III. Fans in S'port should not worry, as it seems Northwestern St. is content to keep playing their end of the home and home at Fairgrounds Field.

I'll be in the process of re-tooling some things around for football season on the site today. Don't freak out if things go sideways for a bit. Also, try to stay out of the Sudden Tropical Depression today.