Share All sharing options for: A Look at LSU's 2011 Defensive Recruits (so far)

Few things get me as excited as college football recruiting (this picture of Marisa Miller is one of them). I'm like a kid in a candy store when I put my eyes on all the new prospects. That came out completely wrong.

Let's try this again. When I start looking into the high schoolers who may become future stars at LSU, I can't help but dream of all the National Championships they are going to bring home to Tiger Town. A couple weeks ago, I profiled the incoming offensive recruits, so let's turn our eyes to the defensive guys from 2011. 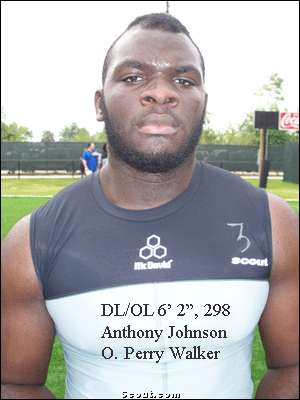 I have it on good authority that Johnson is a top candidate for the 2010 Greg Oden Premature Age-jaculation Award. No, this is not the twisted creation of a Mr. T/Kimbo Slice cross spermination project. This is Anthony Johnson, future rock of LSU's defense. The best part about Johnson is that he not only looks like a bull, he plays like a bear. His nickname "Freak" is no joke. Film on Johnson is sparse, but glowing comments about him are not. He's highly evaluated by every recruiting service: Rivals, Scout, and ESPN. One analyst from Rivals said Johnson personally called him asking what he needed to do to be considered the No. 1 DT in the nation. That speaks to his drive.

To me, Johnson is as surefire as surefire gets. LSU's last highly touted DT, Chris Davenport, has yet to really make a mark on the program, though it's quite early yet. I think Johnson will be a candidate for plenty of early playing time. He's already got the size and strength to play at the college level, so that won't be a factor. When you think of Johnson, think of a bigger Glenn Dorsey. For all his merits, Dorsey never had prototypical size for the DT position. Johnson does. He'll be a household name in short order. And if you happen to run into Frank Wilson, say a special thanks, because he's reason numero uno why Johnson is in purple & gold right now. He holds the keys to that castle, and most of the credit belongs to him. 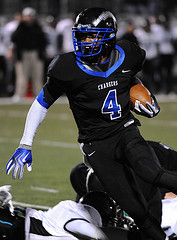 Randle is the wet dream of linebacker prospects that every LSU fan I know has been clamoring for since Bradie James left town. He's a ballistic missile with a radar brain who remains under the perpetual command of destroy.

Randle is an undersized guy, but he's an absolute playmaker. He could definitely grow some, but you don't want him to sacrifice his best asset: speed. Randle plays all over the field in HS, but his future is at linebacker for LSU. I'm a big believer in trusting Chavis' instincts in regards to LBers. He likes the smaller guys that can really run, and Randle is that. Rivals only ranks him as a 3 star, but I think they are certainly missing the boat.

Check out the tape:

I love the way Randle dissects a play and arrives in a hurry. He shows explosion delivering a blow and great short area burst. When he gets there, he's going to hurt you, and that's what you want to see from a linebacker. He certainly has areas for improvement. He must improve the use of his hands to disengage blockers and learn how to sort through the trash. But what you like is that he is a force that can cause turnovers and make things happen. 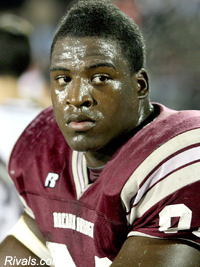 Thomas hails from the same high school that produced Charles Alexander, Jonathan Zenon and Domanick Davis. Like Johnson, there's not a tremendous amount of tape available to evaluate his game, but the obvious attraction is his raw athletic ability. He's already come within five pounds of breaking the school's 335-pound power clean record. He's been timed at 4.8. His high school coach Mike Mowad says he's got a freakish wing span. When you turn on the tape you notice that he mostly gets by on that athleticism. There's very little technique or polish to what he does.

To me, Thomas is a boom or bust prospect. He has the size and athleticism you covet, but there are questions about his discipline and work ethic. Can he hone all his potential into a force? Or will he disappear in two years? Let's hope for the former.

Stay tuned for some upcoming profiles on the 2010 class and what their impact will look like.