It's just under 3 weeks left in the offseason so we continue our series of season previews leading up to kickoff week. Every few days we'll preview a team on LSU's schedule this season followed by a mini round-table where we'll give you our takes on the important aspects of the game at hand. Each preview will have a poll where we'll ask you to pick the winner straight up. Next up, one of the few SEC teams that still has a good deal on season tickets, Tennessee. 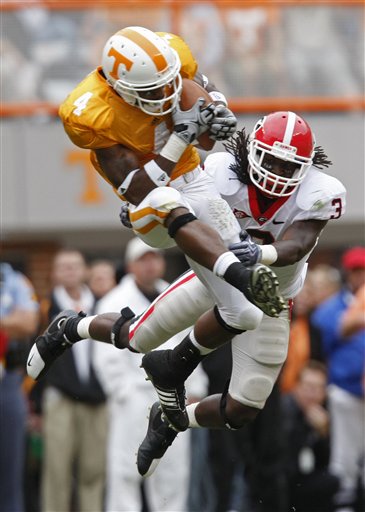 It's easy for fans of SEC west teams to ignore the east teams they don't play and miss some astounding sat lines, which I will now demonstrate. Last year Jonathan Crompton had 2800 passing yards and 27 passing TDs, with all of it nicely distributed between a handful of receivers (and with 13 INTs, some of the defenders too). The best 3 of those return this year in Gerald Jones (680 yds, avg 14.8, 4 TDs), Denarius Moore (540 yds, avg 13.5, 7 TDs), and TE Luke Stocker (389 yds, avg 13.4, 5 TDs) It's a great bunch, and Jones in particular has great speed and is a very difficult open field tackle (as seen above).

Whether these talented players get to show off their skills is the real question for the Vols this season. 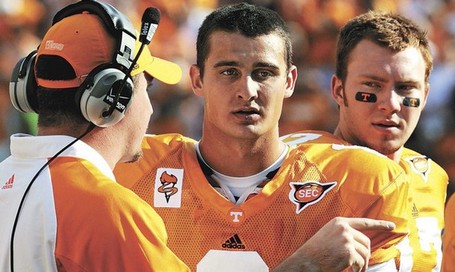 This should be a photo of the next UT QB listening to Jonathan Crompton get instructions, but it aint.
image via govolsxtra.com

One of the many crimes committed by Kiffin besides making a fool of himself and a great football program, crashing cars, starting riots, and salting the very ground upon which he walked, was leaving a bare cupboard for whatever poor schmuck came next. UT returns only 9 starters and remains 10 players under the NCAA 85-scholarship cap (at last count. Due to ongoing disciplinary issues and transfer worries, this number could change in the next few weeks) and gives them a serious problem of depth at almost all positions. The Offense will feel the pain most, returning only those talented receivers. The RB Corps (assuming Bryce Brown does not return) will be led by Soph David Oku and JR Tauren Poole, last year's 3rd and 4th rushers. They have shown flashes of brilliance in their limited carries and could be looking at a break out year. It will be tough, though, behind an extremely green OL that lost 8 players who saw the field last season. SR Jarrod Shaw is the only one with significant playing time with 3 starts at the beginning of last season. While they aren't undersized by any means and have some highly-rated recruits amongst them, they will remain a question mark until we see them in competition.

The QB situation is also very troubling. After years of working under a now graduated Crompton, Nick Stephens went into the spring as the presumptive front runner. But Stephens, who's had short but significant on-field experience since Fulmer's last year, entered spring practice to find himself in a competition with a recent JUCO transfer and a true freshman. After less than 2 weeks, Stephens bolted for the greener pastures of D2. At this point, Louisville transfer (by way of JUCO) Matt Simms is your presumed starter but the trigger could be pulled early on talented FR Tyler Bray. Simms' JUCO stats are good at over 2000 yds passing last year, but the TD to INT ratio of 17-12 is a little troubling. Either one of these guys has tough season ahead of him. With the lowered expectations and leeway Dooley has earned from being "not Kiffin" I'd have to guess he's hoping Simms is decent enough to last the season so that he can give Bray the time he needs to prepare to take over the position for a few years. 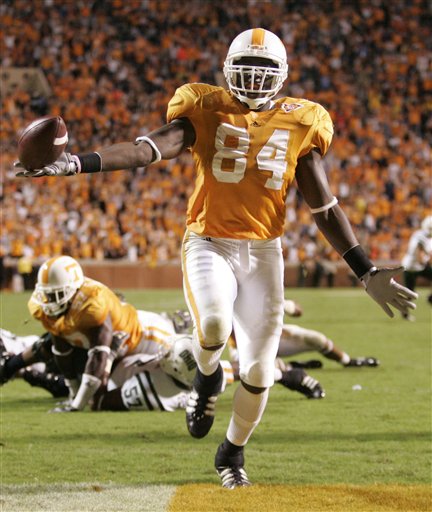 The Defense has it's own significant mountains to climb. While they didn't lose as much in shear numbers as the offense has, the talent drain is enormous. Not returning are their top 4 tacklers including their best Lineman, Linebacker, and Safety. The secondary allowed only 5 passing TD's last year, but it will be almost impossible to repeat that feat now that Eric Berry is the highest paid safety EVAR. Soph Janzen Jackson, after a promising freshman season, will likely become the main threat in a group that only returns 2 starters. The Linebacking corp has only one loss from last season, but it's a doozy. Rico McCoy had an unreal 119 tackles, 2.5 for loss, and 5 forced fumbles. What remains is a solid group of SRs who should be able to pick up the slack. The D Line loses their interior starters, most notably Dan Williams, but have some experienced subs from last year taking over the spots (LATE EDIT: Likely season-ending Achilles injuries for Soph DT Marlon Walls and SR DE Ben Martin happen within days of each other.) SR DE Chris Walker led the team with six sacks and had an impressive season despite playing through a back problem last year. Now healthy, he should emerge as the leader of this line.

Thanks to the SEC (grrrr) no usable highlights of this game exist online. And thanks to multiple staff changes by both teams and the ghost of Perrilloux, they'd be useless anyway. It also makes little sense to include the full La Tech replay from last season, even though Dooley did manage to turn in the best Tech 1st half performance since the Eisenhower Administration.

Dooley is a known name for Tiger fans after his year's on Saban's staff and up in Ruston. We know he wasn't their first choice, but do you think he'll be successful for the Vols?

Poseur: I'll be honest: I know only two things about Dooley: that La Tech gave us fits last year and that his dad is pretty famous. Just because your dad was a great coach doesn't mean you will be (SEE Shula, Mike), but it can't hurt. I'm sure he learned a few things from the old man. But from what I saw in the La Tech game, I was pretty impressed with how Dooley ran his program. Tennessee's got a lot of resources, and I'm sure the Vol faithful will gave him wide latitude solely for not being Kiffin. Based on that limited knowledge, I think he will be successful. It's not like UT totally fell off the map anyway.

Paul: I know the Dooley hiring wasn't met with much fanfare, but the Tennessee brass made a wise decision. They were burned badly by the Kiffin situation (both during his tenure and the abrupt departure), and they needed someone to come in and restore integrity to the program. Dooley is a classy guy who knows how to run a tight ship, and his immediate victories on the recruiting front (luring DaRick Rogers, Justin Hunter, etc.) should give Volunteer fans faith. It will all depend on the patience Volunteer fans and administration has with him. I see Dooley as a long term success project, but I'm not sure it's going to happen over night. If they are fed up by year two, he may be looking for a new job. If they are willing to wait it out, they may have found themselves a coach for the next 10-15 years.

Billy: I think Tennessee may have bought low on a potential blue-chip stock. Tech wasn’t very good last season, but overall Derek Dooley had that program headed in the right direction. I’m not sure I would have been willing to give him the keys to a BCS program quite this soon, but I’m bullish on his potential. The question is, do Vol fans have the patience for what could be a long-term rebuilding process (especially if you want it done right).

Sure, the coaching turnover and some key losses have hurt this team for this season, but 5th in the East? Do you think the Vols will really be that bad this season?

Poseur: No. If it weren't for LSU being picked 4th in the West, I'd say the Vols are the most underrated team in the SEC right now. They have serious problems with depth, but it's not like there's no talent there. Both UGa and USC have their own problems, so upsetting one or even both of their divisional rivals isn't impossible or anything. 4th place is their most likely finish, but I don't see the bottom falling out this year.

Paul: As Poseur mentioned, La. Tech gave us fits last season, so he can surely squeeze more out of a more talented roster (particularly considering the La. Tech we faced was decimated with injuries). I don't think Tennessee will be very good this year, but I could see them really coming on strong at the end of the year. I'm glad we have them early. They are going to be young and thin on both sides of the ball, but talented. 5th in the East is outrageous. Florida is definitely in better shape. But after that it's a crapshoot. South Carolina can't put it together. Georgia is generally a mess and transitioning on defense. Kentucky should be okay, but still not any better than Tennessee. And Vandy is well... Vandy.

Billy: Absolutely. The quarterbacks will be the greenest of green (in a conference known for eating new QBs alive), handing off to sophomore running backs behind an offensive line that will feature more freshmen than seniors. The defense is replacing its three best players from a year ago and just lost two of the best returnees (d-linemen Ben Martin and Marlon Walls) for the year due to injury. Factor in with a tough schedule and .500 is going to be a tough climb on Rocky Top.

This is the first known daytime start for LSU this year. I'm ready to blame this one on CBS. How about you?

Paul: Tennessee fans pushed heavily for a day game here so that after the brutal loss they have enough time to plan a proper riot on the streets once the team charter returns to Knoxville.

Billy: At least the folks watching at home can enjoy a game free of Gary-my-man. Lundquist and Danielson will be on the night game – Florida vs. Bama.