Share All sharing options for: 2010 Football Position Previews: The One Where Billy Chooses Theme Music – Receivers

Michael Clayton to Dwayne Bowe to Brandon LaFell. For the last seven seasons, LSU has had loaded Receiver Corps led by a 6-3-plus  No. 1 targets, and this season it's...

...as 6-5 Terrance Toliver steps in as the Tigers' presumptive go-to-guy.

It may be the only position on the LSU offense seen as a strength entering 2010, but that doesn't stop some new blood from flowing through the veins. Billy Gonzales steps in as the Tigers receivers coach/passing game coordinator - a title that I think could wield influence over the running game as well this year. Gonzales has a rep for high energy and attention to detail, stressing the finer points of route-running and even pulling a Lou-Brown - demanding 10 pushups for every dropped pass.

The aforementioned tall Texan will lead the group. The top-ranked prep wideout of 2007, Toliver had to bide time behind some vets for two years before a solid first season as a starter last year (53 catches, 735 yards and 3 touchdowns), flashing the ability everybody knew he had, albeit with some consistency issues. Toliver has quick feet for such a lanky target, and isn't afraid to lower a shoulder and fight for extra yards. But his inability to be consistent was never more on display than the Capital One Bowl, where he dropped several passes before catching a 39-yarder that set up LSU's go-ahead touchdown in the fourth quarter. As the lone senior of his group, that consistency has to develop.

On the other side, former-top-prospect Rueben Randle lines up. He only caught 11 passes last year, but hauled in two touchdowns and showed plenty of potential to handle a starting job this year. Randle is the kind of smooth athlete that is perfect on the curls, dig routes and comebacks Gary Crowton has generally liked to run as possession routes, with just enough speed to get behind corners if they sleep on him.

In the slot will be one of the season's most important players - Mr. Russell Shepard himself. As we've covered extensively, Shepard will be a heavy factor in the LSU offense this season, catching the ball and carrying it.

Sophomore Chris Tolliver will be the next man off the bench. Another former 4-star recruit, Tolliver fits in more as another slot receiver; as he has kind of a running back's build. The backups at the two outside receiver spots will come from a trio of freshmen: Kadron Boone, James Wright and Armand Williams (classmate Jarrett Fobbs is a likely redshirt). Two of the three will likely see some time this year and through the first week, Boone and Williams have gotten the most reps with the veterans. Boone is more of a pure speed guy and could also see time on special teams. Williams fits the Clayton/Bowe/LaFell/Toliver mold as another tall but slim target (6-4, 195 pounds) that will grow into a bigger role.

Tight end is another spot filled with promise. Deangelo Peterson steps in as the starter after closing last season on a nice note (key touchdowns versus Bama and Arkansas). He's a converted wideout has bulked up to the 240-pound range and has breakout potential. His speed and athleticism is obvious. The only questions is how he handles basic blocking (backups Chase Clement and Mitch Joseph will handle principle blocking duties) and if he can catch the ball consistently. Look for him to line up in multiple locations and possibly serve in a role similar to the one Billy Gonzales used Aaron Hernandez in at Florida. Here's hoping that tight end shovel option Hernandez was so good at running gets some play.

1.       Billy Gonzales. I've never really spent time around many receiver coaches and can't claim to be any kind of expert. But this guy is damn sure good at, at least, sounding like he knows what he is talking about, and he's definitely riding his players hard to follow his teachings. It's hard to listen to practice and not get excited.

2.       Russell Shepard. Savior isn't necessarily the right term for Shepard, but there's no question what kind of difference he can make. If the offensive line and running game improve, LSU's offense will easily be better than last year. If Gonzales and Gary Crowton can truly develop a Percy Harvin-like role for Shepard and follow through with all these pledges to get him the ball consistently, this offense can explode. 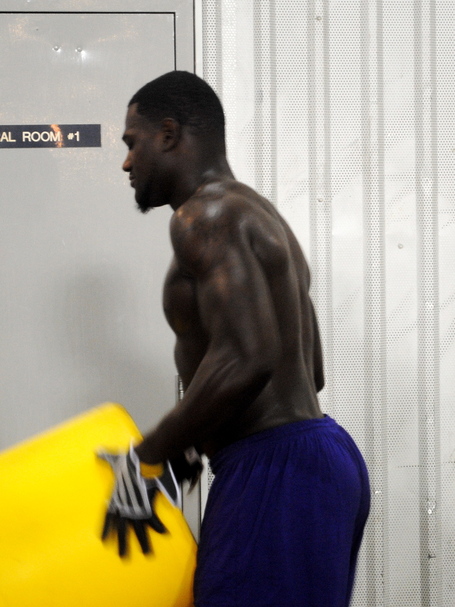 If nothing else, the guy has as a future as a romance novel cover model.

1.       Depth. This is another position where freshmen contributions are a certainty. If injuries come into play, two or maybe even three youngsters may be depended on.

2.       Patience. After back-to-back seasons of playcalling that resulted in passing 44-percent of the time, I expect that number to possibly drop even further. I think LSU will run the ball even more, and the receivers not named Shepard aren't going to get the number of looks Tiger wideouts have been used to in the past. Toliver and Randle (and their backups) are going to have to maintain concentration even when balls aren't heading their way, if they're going to make big plays when the ball does come that way.

3.       Blocking tight end. Peterson hasn't exactly shown he's ready to be an ace in this department. Chase Clement is new to the position, and Mitch Joseph struggled sealing the edge last season. Collapsing the end man on the line of scrimmage is crucial to any spread running game. And until this offensive line shows its ready to capitalize on the early potential it's flashing, it needs all the help it can get.