In every recruiting class there are always a handful of players who are prime candidates to redshirt, a couple that will be long term projects, a couple that will never be more than quality depth and a few who can contribute early and often. These players are often a combination of two things: great size for their position and unique athletic ability. A player like Russell Shepard, for instance, may be undersized, but his off-the-charts speed made him a candidate to step in and play right away. Rueben Randle is a true blend of a player ready to step on the field and play immediately.

Sometimes, the immediate contributors are a bit surprising. For instance, Morris Claiborne, an unheralded Louisiana athlete that earned a late offer, surprised fans when he stepped on the field and immediately impressed last summer. But others you just know are ready. Eric Reid is one of the latter. 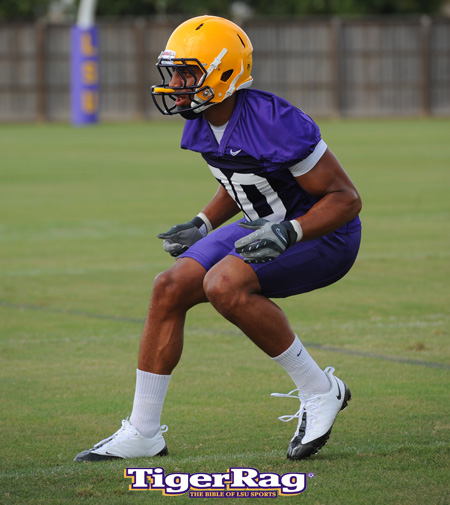 via www.tigerrag.com
Eric Reid has the ability to be the player we always hoped Chad Jones would be.

Eric Reid passes the eyeball test, there is no doubt about that. Very few players come out of high school with the combination of physique and speed of Eric Reid. Reid spent his high school career playing safety, and his build has prompted fans and analysts to speculate about a potential move to LB at the next level. Yet, at every stop Reid continues to impress with his defensive back skills.

The LSU roster lists him as 6'2, 200 lbs. but I think they may be shorting him a few pounds based on the pictures I've seen. LSU just finished a tenure with a larger safety in Chad Jones. Jones was a true enforcer in the run game, but despite his tremendous athleticism, his coverage skills were suspect at best. The similarities between Reid and Jones stop with frame.

Throw on Reid's highlight tape, and it's less adorned with big-time hits than it is with interceptions and pass break-ups. In that case, he looks more like another Louisiana safety who shares his namesake. Coverage is an instinctual game. You can learn basic coverage skills, but true ball-hawking playmakers (something LSU hasn't seen in a while) have a knack for the football. The highlight tape reveals that Reid seems to have that knack. When the ball is in the air, Reid seems to find it and has the speed to do something about it.

On the downside, he's not a big hitter at this point. He has the size to be an enforcer, but he doesn't bring that mentality to the run game. He's a bit hit or miss when it comes to delivering a blow. At times, he will throw himself in there and other times he's more tentative. Which leads to a bigger concern: the health of his shoulder. Reid battled shoulder troubles all throughout his high school career, which may explain his less than 100% aggressive approach to delivering a blow. If those injuries continue, Reid may be one of those sad, injury-riddled cases.

However, let's assume (for the sake of optimism), Reid maintains a clear bill of health. Looking at the depth chart, Reid has already spent the late summer running in the no. 2 spot at safety. With Senior Jai Eugene and Junior Brandon Taylor holding down the starting spots this year, with Junior Karnell Hatcher playing the role of primary backup. By now, it's evident that Hatcher is mostly a scheme specific role player. He struggles in coverage and a move to LB may not be entirely out of the question. That leaves one safety spot open in the 2011 season, which will likely be a competition between Reid and super-stud Craig Loston.

Reid and Loston's skills complement each other extremely well. Loston is a vicious hitter with speed and skills to play coverage, whilst Reid is more of a coverage-styled safety with the size and strength to be a hitter. The thought of having them as starting safeties in 2012 is simply astounding.

Every camp Reid attended last summer, including the FBU Top Stars Camp in Tallahassee (which included some of the nation's top players), he completely dominated. Scouts were repeatedly impressed by his coverage skills and huge frame.

Reid is an explosive, athletic player with limitless potential. While I'd love to see him be a bit more physical on tape, I'm less concerned about that than his shoulder troubles. If Reid stays healthy, the potential to be a three-year starter and potential All-SEC player is there. He's a coach's kid, with a tremendous work ethic and a great student. In that sense, he's truly a coach's dream. He possesses outstanding closing speed and tremendous coverage instincts. Reid has the potential to be the type of safety we always envisioned Chad Jones blossoming into.

High End: Reid contributes this year in certain packages and on special teams. He remains healthy for four years and becomes a full-time starter in 2012. Eventually grows into an All-American caliber safety and approaches the LSU interceptions record.

Low End: Unfortunately, the potential for an extremely low is possible due to Reid's injury history. At worst, I see Reid battling injuries for the entirety of his career and never being able to become the player we hoped based on that.

Realistic: Reid faces some injury trouble throughout his career, but finally gets things right and has a tremendous career at LSU, where he blossoms under the coaching of Chavis and Cooper.