It's just under 3 weeks left in the offseason so we continue our series of season previews leading up to kickoff week. Every few days we'll preview a team on LSU's schedule this season followed by a mini round-table where we'll give you our takes on the important aspects of the game at hand. Each preview will have a poll where we'll ask you to pick the winner straight up. Next up, our East "Rival", Florida. 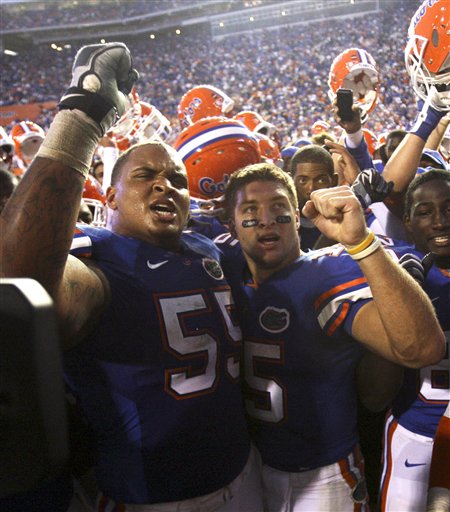 Mike Pouncey would like to talk to you about all those Tebow jokes you made last year.

No matter what happens on offense for the Gators this season, no one will say it was because the Line didn't give them an opportunity to flourish. Even with the loss of Maurkice Pouncey to the NFL, It's still going to be a big and powerful front five, all of them 6' 4" or taller and weighing over 300lbs each. SR Mike Pouncey (6'4", 310lbs) will take over for his brother at center to start but that could change if his problems with shotgun snaps continue. In fact, while it's clear that talented upperclassmen like SR Marcus Gilbert (6'5", 322lbs) and SR Carl Johnson (6'5", 360lbs) will start, where they play in the line in a bit of fulx to start the year, much as it was for much of last season. There are also a few subs who are either talented underclassmen or experienced guys coming off injury who will all jump at the chance to earn a starting job. Addazio will tweak the lineup and plug guys in to find what works initially, but their is no doubt they will hope to be set in their ways long before we see them, as the Gators travel to Bama the week before we come to town. 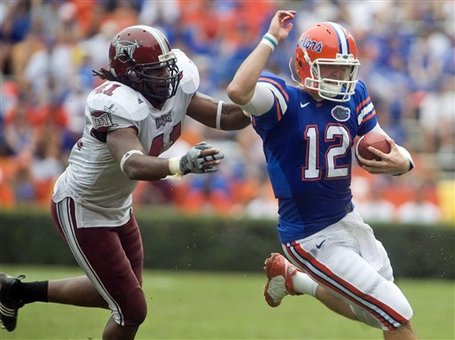 No, this was not a designed run.

Something about the Gator's offensive game plan for the year just doesn't add up. The praise for JR QB John Brantley is somewhere between "better passer than Tebow" and "Could start for Jacksonville right now." I'll admit that Brantley looks great on tape and he was good filing in during garbage and concussion time. He is very much a composed, pro-style passer, who should do well with the Gators speedy receiving corps. Chris Rainey (575yds, 6.5 per carry, 5 TDs rushing) moving from RB to WR adds warp speed to an already insanely fast group, though most expect him to play in the Percy Harvin mold of a little of both. In tandem with Deonte Thompson, there is a real threat that any pass that connects with just a step or two off a defender is going yard. Jeffery Demps (745yds, 7.5 per carry, 7TDs) will look to make up the bulk of the ground game this season and should have a ton more carries with a passing QB in the backfield.

The problem with all of this is that the head coach is still Urban Meyer. He's made it clear to the media that he's working to make Brantley and the rest fit into his Spread offense, not the other way around, and that should be troubling for Gator fans. Brantley is not a dual-threat guy. The only scrambling he'll be doing is trying to avoid a sack. Thanks to a few years of Tebow, none of the RBs have yet had to show they can handle being an every down back. Demps certainly isn't it, being more of a specialty track star/Holliday speed back. The answer might lie in rFR TE Jordan Reed (6'3", 240lbs), a former QB who is stepping in for one of last year's leading receivers TE Aaron Hernandez, but there is alot of talk that with his large frame, he'll be more of a running option, even so far as to take a few snaps at QB as a "Tebow back". The other receivers, at least, should be fine now that they have "a real quarterback" tossing to them.

I've kinda painted myself into a corner here, labeling these segments as Strengths and Weaknesses. Clearly Florida has more than enough talent to pull this off. And while there has been a bit of a brain drain in the coaching staff of late, it's certainly within Meyers ability to make this work. But until we see it work on the field, I remain skeptical that this will be anything but a decent rebuilding year for Florida 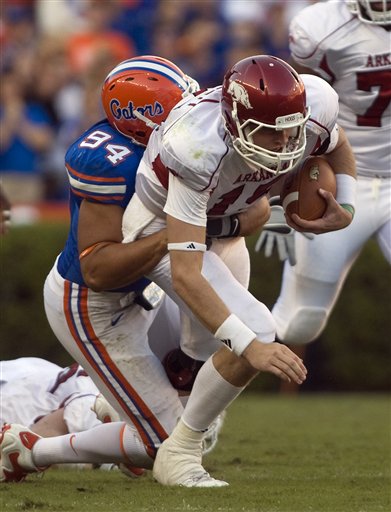 Justin Trattou is just trying to make a new friend.

Forget about Tebow, the Defense is where the most important personnel losses were this year. Gone are DEs Carlos Dunlap and Jermaine Cunningham, LBs Brandon Spikes and Ryan Stamper, and CB Joe Haden, collectively taking with them 286 tackles, 16 for a loss, 8 INT and the bulk of the leadership on that side of the ball. SR Justin Trattou (6'3", 252lbs) will look to take the lead DE spot. He's a proven asset with nearly 20 starts under him, but has not proven to be a great pass rusher, at least not to the level Dunlap was. That role will probably be shifted to SR DE Duke Lemmens (6'3", 253lbs), a long time reserve who has tremendous speed off the line, but has never really made an impact in his brief playing time. If neither work out, we could see FR Ronald Powell, one of the best gets for UF's recruiting class this year. The secondary is much the same story, with JR CB Janoris Jenkins (38 tackles, 2 INTs) taking over Haden's shutdown corner role. SR SS Ahmad Black will be back over the middle, trying to get his INT numbers back up to his 2007 count of 7 after a down year. In for Spikes at MLB is SR Brandon Hicks (32 tackles, 5 for loss, 4 sacks) a great reservist who earn a starting role on the strongside towards the end of last season. And by the time we see them, rFR WLB Jelani Jenkins, a tremendous pass rusher in high school could be starting over Soph Jonathan Bostic who disappeared statistically in the gators D last year.

By far the low point of our under-performing offense last season, in a game that was painful to watch in person as it seemed neither team knew how to score anymore. The less I remember about this game the better.

Brantley's got, dare I say it, "Tebow-esque" hype going into the season. You buy it?

Billy: Between the offense he’s in and the players around him (particularly that offensive line), I imagine he’ll do fine overall. There will be ups and downs like there usually are with new quarterbacks (at least one ESPN studio personality – probably Mark May or Trevor Matich – will mention him as a Heisman dark horse in September) but I do expect growing pains. We all know Florida has talent at receiver, but it was clear last year Tebow didn’t trust the ones not named Cooper or Hernandez. The question is, was that a function of the anointed one’s limitations as a passer or the talent level of the other wideouts?

Poseur: Maybe not to the extent of the hype, but will he be a top tier QB? I see no reason why not. There is a whole heck of a lot of talent at Florida which should help ease the growing pains a bit. Is Branley going to be challenged Mallet? No. But after Mallet, there's a pretty big drop off in quarterback talent in the conference (not a veiled shot at McElroy)

Paul: I'm going to be in the minority here, but no, I don't. People keep talking about all the talent he has around him and how Tebow said he's the best QB on the team and how he's already been christened as the second Messiah. That's all well and good, but I'm just not seeing it. At WR they have a couple of formerly high ranking guys who have yet to seriously produce at this level in Thompson and Moore. Next they have Chris Rainey moved to WR, who looks like he'll play the Percy Harvin role. Their starting TE was a QB until the Spring. On the OL, they have 2 guys who split starts last year (Nixon and Wilson) and a new Pouncey at center. The other two guys are experienced, but I'm not sure it's etched in stone that this will be a great group. I saw this week that Addazio says the offense hasn't changed. If that's the case, they will be terrible. Brantley can't carry the ball 217 times this year. If that's coachspeak (and I believe it is), they will be running a more traditional look, which didn't exactly make them a machine in Leak's final year. Brantley will show flashes, but they will struggle against stronger defensive foes and ultimately enter 2012 with a lot of question marks on offense.

That D stopped us dead cold last year, and looks to be reloading rather than rebuilding. Will it be a slow night in the swamp for the Tigers?

Billy: If I’m a Gator fan, this is the area I’m more concerned with. Again, no question there’s talent. But replacing one of the best end combinations in school history, an underrated leader in Brandon Spikes, two star DBs AND a top-shelf coordinator? That’s a lot to ask. Nevermind that Teryl Austin wasn’t the first choice for the job and seemingly only got it because he’s friends with Steve Addazio (who isn’t exactly the most popular guy in Gainesville anyway).

Poseur: It usually is. Fairly early in the year, tough road environment, nasty defense full of talented players... yeah, I'm not counting on a 30-point explosion or anything.

Paul: Once again, I'm probably in the minority, but I don't think they will be a very good defensive unit. They lost their best corner, best safety, best linebacker and two best DLs.. and their DC. Their DL is underwhelming outside of Omar Hunter. Jelani Jenkins will be a major playmaker for them at MLB. Janoris Jenkins was not a good corner for them last year, so can he recover? Ahmad Black is a talented guy and Will Hill is an uber-talented kid that hasn't really done anything to stand out yet. There's talent there, but the starting DEs aren't particularly threatening. How quickly will they turn to the youngsters? That could be the tale of the tape on this defense...

Are you taking a 72 hour retirement this year?

Billy: Only if coming back gets me a No. 1 recruiting class and a raise.

Poseur: Depends on what the wife says.

Paul: You know guys, I really am. And it's totally a decision I need to make for my family. That's how important they are to me. 72 hours important. Seriously, that seems like a girlfriend/boyfriend 7th grade spat. "I'm breaking up with you if you don't quit football!" "Fine, I'll quit." Meyer holds press conference. Three days later. "Baby, I didn't mean it. You can keep coaching." "Ok, good." Meyer holds press conference again and returns.