We've talked about the offensive line, but both fronts were a problem for LSU in 2009. And while we don't know whether the results will improve for sure, one thing that is guaranteed about the 2010 Tiger Defensive Line is that it will be a case of...

...as 2 seniors, 1 junior (who is a first-year junior college transfer), three sophomores and three more freshmen are all expected to see time in the rotation.

Youth is definitely the key word for this outfit this season. The last time LSU was breaking in this many new faces on the defensive line was in 2006, when senior Chase Pittman led a rising group of players that included Glenn Dorsey, Tyson Jackson and Ricky Jean-Francois. Obviously, it would be insane to put that level of expectations on this year's defensive line. But there are certainly some exciting players.

Drake Nevis takes over at the leadership spot. He's been a solid contributor since his true freshman year, but technically this is his first as a starter. Short and stout, Nevis has a very similar body type what's become the classic LSU DT (much like Dorsey, Kyle Williams, Chad Lavalais, etc...). He's been an excellent three-technique player, who can shoot gaps versus the run and pass (18.5 career tackles for a loss). But he's also had his issues with discipline - in terms of taking some plays off and losing his gap assignment at times. But nobody questions his playmaking ability.

Lazarius "Pep" Levingston is the early favorite to man the other tackle spot after starting at left end in '09. He's bulked up to 280 pounds for the assignment, and to be honest his skill set always fit better at tackle. He's a hustle and pursuit type, who didn't make many plays last year (no sacks) but did manage eight tackles for loss. If he can hold up against bigger guards and centers, he has the ability to be a solid run defender.

Three second-year players will make up the remainder of the rotation - sophomore Josh Downs and redshirt freshmen Michael Brockers, Chris Davenport and Bennie Logan. Downs made splashes at times as an undersized but overactive gap penetrator, but also struggled to stay healthy. Davenport was a 5-star recruit who battled injuries and weight issues his redshirt year, but has dropped 15 pounds and is starting to look like he has a real chance at contributing. Brockers has been one of the stars of fall camp. Six-five and as lean as a 300-pounder is going to look, Brockers was identified as "a name you want to know" by John Chavis at Tuesday's media day briefing.

Defensive end is the source of either uncertainty or excitement, depending on how optimistic you are. Five players will look to be in rotation for the two spots - and all five are underclassmen or new players.

Junior college transferee Ken Adams seems to have one of the defensive end spots locked down. A 6-4, 255-pounder, Adams played wide receiver in high school and has turned in some impressive workout figures through the last few months, including a reported 4.5 forty. For the moment, it appears he'll be joined by another undersized speed guy in the starting lineup in redshirt freshman Sam Montgomery. The No. 2-ranked defensive end of the 2009 class, Montgomery picked up two sacks in the spring game and has consistently drawn praise for his intensity and focus from Miles since the spring. The question is, whether Chavis will go with two speed ends as starters or go with the more typical pass-rush type on the weakside with a bigger guy on the strong side (a Tyson Jackson type). The two favorites to man that position are sophomores Lavar Edwards and Chancey Aghayere. Both saw spot duty in 09 and were impressive in spots, but struggled with injuries and inconsistency.

The fifth end is our glorious Steampunk Emperor Mingo. 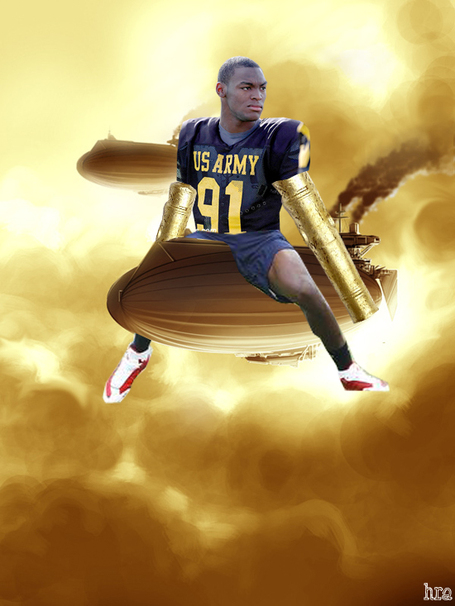 Who is easily the fastest lineman on the team and probably one of the three or four fastest defenders period. But at a listed 237 (up from about 210), Mingo will still probably only see the field in third-and-long situations.

1.       Depth, depth and more depth. Last year LSU had a crunch-time rotation of about seven defensive linemen total. This year there are at least 11 bodies that have a legit shot at playing time. And that's not even counting true freshmen Ego Ferguson, J.C. Copeland and Jordan Allen. And while all 11 of those guys won't play consistently, the numbers are there if they are needed.

2.       Speed and athleticism. Between Adams, Montgomery, Mingo and Nevis, there's more than enough quickness on this team to make a lot of plays behind the line of scrimmage in the right opportunities.

3.       Drake Nevis. I've been a big fan of his potential since he cracked the lineup as a true frosh in 2007. He has a fantastic first step and is one of the strongest players on the team (school record in the power-clean, 400-plus bench press and over 500 on the squat). The only things holding him back from being an All-American is his (crap I have to say something about a motor don't I? Damn you sports writing cliché gods!) ability to keep his motor running (I hate myself sometimes) and a tendency to take himself out of plays by getting up the field too quickly.

1.       Size, size, size. A lineup devoid of a single guy north of the 285-pound mark is a real possibility. A few months back, Bud Eliot of Tomahawk Nation did a study and found that top-20 defenses tended to have a combined weight of 1,780 pounds in the front seven - a number LSU was over last year but appeared to be well under this summer. The good news is, since the updated weights on the LSU roster, the current projected front seven for the Tigers will weigh in at 1,767 pounds - just 13 pounds off the magic number (and with backup d-linemen who could easily push it over as starters). But that's still not very big. All that extra athleticism will come in handy against the spread teams on LSU's schedule (West Virginia, Florida, Auburn, Mississippi State), but it may be a vulnerability on the pure-power groups like North Carolina and Alabama.

2.       Experience. Young is definitely the best description for LSU's front seven in general - twice as many freshmen (6) as seniors (3) occupy the two-deep.

3.       Injuries. Sure, there's more depth at this spot than LSU's had in a couple of years, but not only do undersized linemen occasionally get pushed around by the bigger guys, they also occasionally get hurt by those fatties. And just because there are a lot of talented underclassmen in this group doesn't mean you want to be forced into depending on them all.