Excuse me for my inappropriate title, but I find it fitting. The younger brother of former LSU stud TE, Dick Dickson, Travis, is, according to big bro, a bigger, better version of himself. Travis is currently listed at 6'3, 243. Assuming the LSU roster adds a few generosity pounds, that puts him about at the weight Richard Dickson played at... last year.

There was little doubt Travis would pick LSU, following in his brother's footsteps. Coming out of HS he looked equally adept at both TE and DE, illustrating a bit more athleticism than his brother ever did. And while Richard was generally listed at 6'3, 235+ lbs., he's always seemed shorter and thinner. Richard was a fan favorite and one of the most productive TEs in the history of LSU. However, Travis has the potential to be even better. 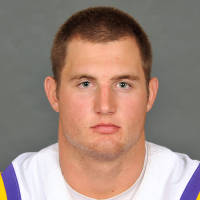 They call me Mr. Big Dickson for a reason.

It is a natural, nay easy, comparison to say Travis is like his brother, but I honestly think that may be short changing his ability a bit. Travis is both bigger and faster than his older brother. Richard possessed adequate speed and below average size for the TE position, but he made it work with his great effort and good route running. In Travis, I believe LSU has a more well-rounded player.

Richard was never an asset as a run blocker, though he would block with great effort. Early reports have Travis getting a look at the FB position, which is an indication of what coaches think of his blocking ability, considering FB is an almost block-exclusively position. Listed at 6'3, 243, we can assume he's probably in the 6'2 and a half and 230 range. Good size for an incoming freshman. The roster currently lists him as a TE, but I wouldn't be surprised to see him get looks as a FB, TE and even as a DE.

As a DE, Dickson shows a good first step off the ball, and relentless effort. He's not exactly a natural pass rushing threat, but his effort makes him a candidate for cleaning up sacks and a mistake eraser when other's over run plays. He makes his bank on being a high-effort player, but don't mistake that for lack of athleticism. Travis has good change of direction and lateral movement for a bigger guy. He's never going to be KeKe Mingo fast, or Sam Montgomery explosive, but he will be Kyle Williams nasty. You like him because he won't stay blocked.

Realistically, his future is probably at TE, just like his brother. With all the young DE talent, cracking the depth chart there seems a remote possibility. However, the TE situation is murky as well. Currently, Junior DeAngelo Peterson sits atop the mount, and looks the part of a breakout player this season. Mitch Joseph, another Junior, is a blocking-exclusive TE. Sophomore Chase Clement is a recent convert, who is still developing, but looks like he could be a well-rounded threat as a blocker/catcher. Alex Russian is a junior who looks like his future is only at long snapper. That leaves Sophomore Tyler Edwards, who appears to be more of an H-back than true TE, along with another incoming freshman Nic Jacobs (who I think is a likely candidate for OL).

So where does Travis Dickson fit into all that mess? As of right now, it looks like he will have a chance to play this season at least a bit as either a TE or FB. His size and blocking ability, coupled with his relentless nature make him a prime candidate for early playing time.

As far as his long term outlook is concerned, it's not likely he'll be a 4-year starter at TE as his brother was able to do. There's too much depth at the position currently to allow for that. However, the athletic upside means he could be a better all-around player. Richard battled injuries throughout his career, and is currently struggling to lock down a spot on an NFL roster. Travis's superior size and athleticism should make that leap less questionable.

Ultimately, I expect Dickson to be a very talented contributor at LSU. How big of a component will the TE be in LSU's offense? Will his primary role be as a blocker, or will he be able to blend his blocking skill and catching ability to be a dual-threat player for the Tigers? His impact may not be as great as his older brother immediately, but I think in the long term he will emerge as a more superior player that can offer LSU some nice depth and versatility at the TE position.

High End: All-conference TE with the potential to be a middle-to-late round NFL draft pick.

Low End: Fails to climb depth chart until his senior season where he puts out a solid campaign. However, his effort will make him a coaching and fan favorite, so he'll contribute for 4 years regardless.

Realistic: I think you're looking at Dickson as your starting TE in 2012. Or at least splitting some serious time by then. DeAngelo Peterson is a freak athlete, so LSU fans should come to grips with the fact that if he has a huge season, he may try to make the leap to the NFL (particularly since I don't believe he comes from the best financial background). That means in 2011 your TE situation could be Clement/Joseph/Dickson/Edwards. Clement has struggled in pass catching thus far, so if he continues to fail to get acclimated, Dickson may be the default pass catcher at TE in 2011. Regardless, I think he'll be a serious contributor for 3 or 4 years and a fan favorite easily.