When you look up and down the 2010 class, I don't feel there's any other player that fits this description better than Jordan Allen. It helps that Allen comes from a program which is basically a minor league affiliate to LSU football, headed up by Don Shows, who makes no effort to put on a neutral face. Allen is his latest protege, and one Shows thinks Allen can be awfully good at LSU. 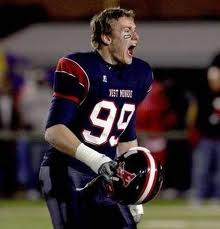 via t2.gstatic.com
Allen's got the tenacious attitude to be a playmaker. The question is, on what side of the ball?

Now, I'm not much for the "bleeds purple and gold" nonsense. I guess being an active follower of the recruiting circuit makes me incredibly cynical. But with Allen, there is some merit to that type of distinction. As mentioned, he comes from a very pro-LSU environment. Through interviews I've read, and the time I got to speak to him, Allen repeatedly mentions the importance of LSU to the community and he seems to perceive that he's not just playing football for the university, but the entire state. That's a pretty grounded mindset for an 18-year-old, but you get the sense he's a bit more mature than your typical 18-year-old kid.

Now, raise your hand if you've heard someone call him Jared Allen? This happens endlessly, nearly every time I read or have discussions about him. Perhaps the comparison is too easy, both sharing the same last name, initials and physique (Jared is 6'6, 275, Jordan is 6'6, 265). In an interview with Tiger Sports Digest, Allen even confessed to idolizing Allen. Rivals lists Jared Allen as the "player he reminds us of." Yet, I get the feeling this comparison is more about name and build than it is about actual football. There's a comparison which I think fits much better, but may not jive with other's thoughts:

Whitworth also emerged from West Monroe, and came out of HS as a highly regarded athlete. The 6'7 behemoth who now starts for the Cincinnati Bengals was once a tall, lean kid that played both ways in HS. Whitworth played with a nasty streak and eventually blossomed into one of the best LTs in college football. I'm not entirely sure a future of the same sort won't be in order for Allen.

Allen played exclusively DE in HS and will get his first look there. Beyond his tremendous size, Allen plays with relentless effort and loves to get after it. He flashes a quick first step off the ball and looks to have pretty solid speed for a big man. However, he also lacks in fundamentals. Being 6'6, Allen tends to fire off the ball too high (something that commonly plagues taller guys). He uses his hands inconsistently, but when he does, he shows the power to create separation and make plays. For him to continue to blossom as a DE, he'll need to wholly refine his technique. This is certainly a possibility.

Yet, I look at his frame, much like I do Nic Jacobs, and see a future OT. In high school, finding big bodies that are also good enough athletes to play on the OL can be extremely difficult. We saw just this season that Ciron Black's lack of athleticism really hampered him from fully developing into a great player. Allen has the frame to add 40 pounds of muscle and still be an explosive athlete. Add to that his lunch-pail mentality, and you've got yourself a ball player. That's the kind of potential OL coaches drool over.

To be clear, this is a major project. Allen will need to add bulk and strength, as well as refine his game as a blocker. Will he be receptive to such a move? I think so. He's from a team-first mindset, so I don't think a position switch would bother him. His long arms and height would be a definite asset as an OL. If you look at our current OL, it seems Miles and Co. are interested in taller, leaner guys (our center is the shortest at 6'4, and that's tall for a center).

Allen is the type of player that can be 6'6, 315 and carry 10% body fat. That's a big, dangerous body. Regardless of where he ends up positionally, he should be an impact player in time. I think a 2010 redshirt will serve Allen well as he awaits his time to make an impact on the depth chart.

High End: In my eye, Allen flips to OL, bulks up to around 315 and ends up being a top-flight OT for LSU for two or three years. With his athleticism, this may mean an eventual high NFL draft pick.

Low End: Allen has dealt with some lingering injuries (turf toe, for one), so if he continues to stay dinged up his entire career, he may be a high-ceiling guy that never really becomes a great player at LSU (Will Arnold pt. 2?). If he stays healthy, he should vie for a starting position for at least his final two years and be very solid depth.

Realistic: I think Allen will be a late contributor. If he remains at DE, he'll have a chance to be apart of the rotation as early as next year. If he's moved to OT, as I suspect, his development will take a longer route. I suspect he won't become a full-time starter until his Junior or Senior year, but should blossom into a very fine player.