Better Know a Freshman: Barrett Bailey - Mr. Say A Little Prayer For Me

Share All sharing options for: Better Know a Freshman: Barrett Bailey - Mr. Say A Little Prayer For Me

"Hi, my name is Barrett Bailey and somehow, despite the fact that I'm a walk-on, I'm now the most talked about player on the entire LSU roster."

Honestly, I know the fine readers of ATVS knew who Barrett Bailey was all along, but I'd be willing to wager that if you polled the average Tiger fan, the response would be something like..."Isn't that the stuff you put in a White Russian?" (the Dude abides man). But in truth, the 6'4, 196 lb. Freshman is now your third-string QB and the heir apparent (or should I say, apparent heir) to the LSU starting QB job. Isn't that special? 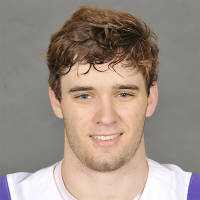 via lsusports.net
Wipe that shit eatin' grin off your face Bailey! You could be our starting QB in no time.

Well, most of the off-season was spent focusing on the Jarrett Lee reclamation project and the growth of Jordan Jefferson. Most of the conversation consisted of two parts doubt and one part "we're screwed." Though, as Billy so adequately stated, Jefferson seems to be progressing at a steady rate. Lee has looked stellar throughout the summer, leading many to pontificate their desires to see him reinstated as LSU's starting QB. Yet, Jefferson remains the starter, which leaves many cautiously pessimistic... at best.

Oh yeah, and then there's that Zach Lee fella. The future savior...*sigh*. I say most proceeded by generally ignoring the potential multi-millionaire dollar bounty hanging over his head (I know I did). I even wrote a blog about the potential of the Dodgers drafting Zach Lee... to NOT sign him. And, unfortunately, I was wrong. So so wrong. So horribly wrong, it hurt. It felt like a midget jumped up and karate chopped me in the balls. Three times.

That's how naive I was to the situation. Like a little sheep I believed Miles repeatedly saying Zach Lee came to LSU to play football and baseball and he loved LSU. I really thought this kid was gonna turn down the millions (actually I just didn't think the millions would ever come calling), because he loved LSU SO MUCH.

But enough about him, his exit means the entrance of Barrett Bailey to the forefront of the QB position. Currently, Bailey's top competition for the starting job in 2012 is... a guy who isn't even on campus yet (and just committed a couple weeks ago, for that matter). I'm sure the coaching staff will hit overdrive on the pursuit of a top-flight QB, but that's not the issue.

What does Barrett Bailey bring to the table? Let's be clear from the get go, Bailey is a walk-on. But walk-on does not always equal mor-on. Bailey is a Baton Rouge product that could have gone to a handful of other programs on scholarship, as a QB. UAB, for instance, made a late pitch to earn his services. Louisiana Tech and a few other regional schools were also interested in Bailey's services. The fact that he passed on them is a testament to his desire to be at LSU.

Bailey played in an offense similar to what LSU is trying to produce (a mixture of spread with some I-Form). He's a good athlete that ran a 4.7 and lead his team to a District Championship. Rivals lists him as a Dual-Threat QB, but I wouldn't go that far. He's a guy that can run a bit, but more of the get-out-of-the-pocket-and-pick-up-a-first-down variety. His arm strength isn't overwhelming, but he's hardly an Andrew Hatch. He shows some pretty good zip on his intermediate routes. Shows a nice touch on his ball. Flashes good accuracy. Looks awkward throwing on the run, but is effective. He's also got a nice, over the top release and gets rid of the ball quickly.

Now, on the downside, his footwork needs a load of work. He takes far too many false steps in his drop, but this can be corrected. He seems to mostly be throwing to spots, rather than players. There will certainly be throws like that in the offense, but it won't be every one. In that sense, there's a lot of progress to be made.

Ultimately, Bailey will never be a world beater at LSU (unless he takes his game to some unimaginable level - hey, it's happened before). But there's also no reason to believe he's just a giant dog turd out there. The kid has some ability. The real negative here is that he is literally the only player we have. If Lee and Jefferson get hurt (once again knocking on all the wood in my apartment), then we're up shit creek. There's no two ways about it: that sucks.

I imagine the staff will not only bring in another freshman QB this year, but may even take a look at a possible JUCO option to allow the youngsters an additional year to mature. In that case, Bailey may never play a down for LSU.

High End: Bailey becomes the ultimate game manager: a low turnover, low risk starter at QB that does all the right things to keep LSU out of trouble while relying on their run game.

Low End: Bailey never plays a snap for LSU and serves as a career back up.

Reality: I'm guessing Bailey will battle for the starting QB job in 2012, but not win it. Stephen Rivers is more talented than him and whoever else LSU targets this year presumably will be too. It's not likely he ever becomes LSU's starting QB, but LSU fans should fret less about Bailey's actual ability than the lack of depth at the position overall.