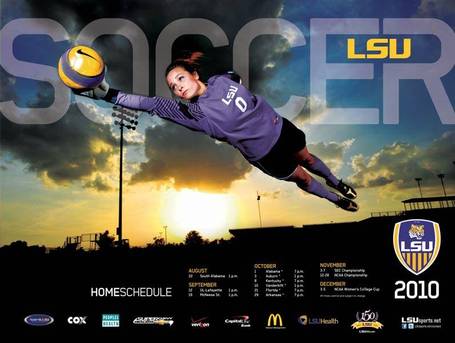 Baseball and Men's Basketball both released schedule news late last week with some very interesting out of conference matches for both teams this year. Baseball starts with 16 straight home games that includes a home series on the 4th weekend with West Coast powerhouse CS Fullerton. The full schedule is up on LSUSports.net. Basketball will play a mid-December match with Wichita St. up in S'port (at the CenturyTel in Bossier City)

Everybody is puting out those season previews right now, and SB Nation's Auburn blog Track'em Tigers has a rather excellent one for the LSU/AU matchup.

Les Miles missed the last stop of the Tiger Tour in BR (probably had something to do with all of this weekends recruiting updates), so that left Gary Crowton at the mic to talk about pudding.

Team Ego has been cleared. Jakari Gore is the only commit yet who is still waiting on a decision from the NCAA.

With Fall camp only 4 days away, The Advoc had a huge spread on LSU in Sunday's paper, including their season preview.

LSUSports.net recently debuted the Mobile version of their website at m.lsusports.net (Link only works on a phone). Perfect opportunity to remind you that ATVS also has a mobile version which you can reach at mobile.andthevalleyshook.com and it even supports commenting so you can follow game threads live from Tiger Stadium, if you can get cell service that is.

The 2010 Fan Guide and Parking Map are both now available online. The only major change I've noticed so far is the expected addition of the Old Alex Box grounds as a pre-sold parking area.

With camp so close to starting, it's going to be a slow week on the news front. Perfect time to catch up with Jack Hunt's team in Metairie.