Few things get me more excited about a recruit than when he comes from an NFL lineage. Sure, it may not always mean greatness, but many times it does. So when I heard that our first OL commitment from the 2010 class came from a father who was an 11-year NFL vet, I couldn't help but be excited.

However, to simply dismiss Evan Washington as the son of Marvin Washington would be remiss. He's not a player who earned an offer because his daddy played football. No, this 6'5, 287 lb. kid can really play. 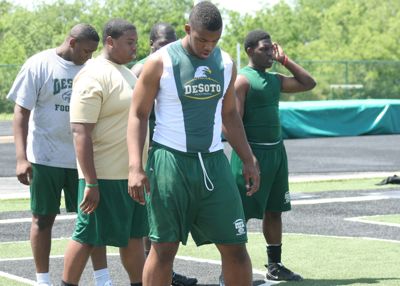 Washington easily looks the part. But can he turn potential into actuality?

The recent struggles of LSU's offensive line can mostly be traced to attrition. When you start tallying, the body count can be likened to the first five minutes of a Rambo movie. And it's not just numbers LSU lost, but some seriously talented potential contributors, a few of which are now in line for starting positions at other SEC schools. As a result, LSU became young and thin up front and struggled to push the pile, much less be a dominant rushing attack. Therefore, the importance of a player like Washington cannot be underestimated.

Offensive line is traditionally the most difficult position to evaluate. A variety of changing factors (player's size, competition, growth potential) make predicting a lineman's success a crap shoot at best. Just take a look at the number of high profile NFL linemen and their former HS rankings. With that caveat, I will venture into the murky waters of explaining why I believe Evan Washington will be a star.

The first thing you love is his frame. Washington is a legit 6'5 and carries 287 pounds very well. His arms are of the freakishly long variety. Build wise, he's near ideal for the LT position. From the tape you can see his athleticism. He gets out and moves much better than most his size. What's truly scary is that Washington's primary athletic experience is in basketball. He only started playing football his junior season, so most of the dominance he exerts on the field is purely the product of his athletic ability.

However, there are a few question marks regarding Washington. All the physical tools are there in spades, but he's very, very raw. Washington tends to use his massive frame to dominate in HS, and gets away with otherwise poor technique simply by being the bully on the playground. The biggest concern for me is that Washington plays entirely too high. This aspect of his game will need to be significantly reworked. Much like I mentioned with Nic Jacobs, it's not that Washington looks lazy, it's just that he plays like he knows he is physically better than his opponents. You'd love to see a bit more of a mean streak out of him. Now, will increased level of competition draw that out of him? Possibly.

Washington was an early enrollee, which should expedite his growth. He got to play in the Spring Game, and what's impressive is that he already physically looks the part. While Chris Faulk is the primary back-up at either tackle position, Washington looks to have sewn up the 3rd string LT job already. He made headlines in the spring, when he leapt past more veteran players figured to be in line for playing time.

However, I don't expect Washington to see the field this year. With Faulk manning either back-up spot for the tackles, and solid backups in Josh Williford, Greg Shaw and T-Bob Hebert, I don't see a logical reason to burn Washington's redshirt year just to get him minimal playing experience (barring a disaster scenario). A redshirt would really help put a year of space between he and Chris Faulk (who is perhaps the heir apparent to the LT position).

Regardless, the question for Washington will be honing his pure physical talents into an ass-kicking machine. There's no athletic limitations here, and his upside is mighty. Does that make him a boom or bust prospect? I don't think so. I can't foresee Washington being a complete failure (particularly with how he impressed in Spring drills). The future looks bright for the LSU offensive line, and Washington is one of the biggest reasons why.