It's August. The football team reports in just a few days for fall camp. So naturally, it's time for some serious positional breakdowns. But you can read those anywhere, and of course we here at And The Valley Shook like to stand out. And occasionally break out into song. This means you, dear reader, get some musical accompaniment.

In the extended metaphor of the offensive renaissance of LSU in 2010, the offensive line is the paint and the Offensive Backfield will be the canvas.

Song title says it all. With the revamped offensive line and a commitment to running the ball that has been the central theme Les Miles has put out there this summer, expect much more production in 2010.

LSU has employed a running-back-by-committee approach for pretty much all of Les Miles' tenure. It hasn't always been all that popular, but the idea seems to be spreading and, as pretty much anybody who plays fantasy football knows is all the rage in the NFL these days. And we've all wanted to shove Mick Foley's barb-wired-baseball bat up Tom Coughlin's ass at least once for pulling Brandon Jacobs out of a game. Why in the hell are you putting Ahmad Bradshaw in you fucking red-faced crotchety old prick? Wait...did I just type that out loud? Anyways... 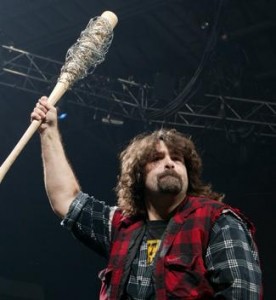 He'd like to have a talk with you too Mike Shanahan.

The top three returnees are, of course, senior Richard Murphy, junior Stevan Ridley and redshirt freshman Michael Ford. Murphy, still coming back from his second knee reconstruction (he also blew the same knee out in high school), was held out of contact in the spring. Ford and Ridley took the opportunity and...um...ran with it (/slaps self for bad pun), putting up promising numbers in scrimmages, and with each going over 100 yards in the spring game.

The other name that needs to get mentioned in the running back discussion is of course Russell Shepard. His official position may be listed as receiver, but I expect his carry total to double his catch total (in the spring game he had eight carries to two catches). The committee approach I have in mind (and this would be ideal) would be something similar to what the Saints ran last year. When Sean Payton's offense was running at its peak, Pierre Thomas was serving as the No. 1 and as something of a general all-purpose back on all types of runs and catches. Reggie Bush obviously serves as the classic third down back, catching passes and running from the spread sets. Mike Bell served as the goal line/short yardage specialist and as the "closer" so to speak - taking fourth quarter carries when it was time to eat the clock. For LSU's purposes, Ford would probably be the best option for the Thomas role, as he blends the power of Ridley with a little more explosiveness. Shepard and Murphy could serve in the Bush role with Ridley eating up defenses in the fourth quarter.

Ware's running style actually reminds me of Kevin Faulk (who also played quarterback in high school, coincidentally). Quick feet and loose hips, but always running behind his pads. Gore (cousin of Frank) doesn't blow you away with his size or workout numbers, but his high school pedigree, well it stands out. Twelve yards a carry and a district MVP. In class 6A Football. In Dade County, Fla. Need I say more? Blue was one of the state's best backs last year and has experience as a receiver as well - but is likely facing a redshirt. Ware is the chalk pick of the three to play as a freshman, but it wouldn't shock me if Gore contributed early as a kick returner. It also wouldn't shock me if all three redshirted.

Fullback is the question mark of the backs. Presumptive starter Dominique Allen is indefinitely suspended, and his compatriots include walk-on James Stampley and converted offensive lineman Richard Dugas (also a walk-on). Freshmen Brandon Worle, who does this:

and Travis Dickson are also expected to be in the mix. Dickson is the brother of the recently graduated Richard, and while he's listed as a tight end some have speculated he could get start out in the fullback mix by necessity. As nondescript as the position seems, there's no question LSU missed the presence of pile-driving Quinn Johnson last year. Fullback is definitely going to be one of the open jobs to watch at training camp.

1.       Michael Ford. If you followed recruiting, Ford's name was getting whispers as a freshman or a sophomore as the next great back out of Leesville, and while he redshirted 2009, you couldn't help but be impressed last spring. Ford may not be the biggest back at a listed 207 pounds, but he may be, pound-for-pound, the strongest player on the team and maybe even in the SEC after putting up numbers like these during May conditioning tests. His running style befits a much bigger back, and is relentless. While he doesn't have amazing speed, he has enough burst and wiggle to get to the corner, and most importantly, he just keeps going forward. The legs never stop pumping and he always finds a way to position himself for positive yardage. When people talk about a player having "it" - that's what they mean for a running back.

2.       Stevan Ridley. He kind of got lost in all the positive press for Ford this spring, but let it not be said that Ridley wasn't impressive on his own.  Ridley (and Ford) present something of a departure from the style of runners LSU has employed recently. Whereas backs like Charles Scott, Joseph Addai and Keiland Williams were the slashing, one-cut-and-downhill type of runners, Ridley and Ford are built a little lower to the ground and have some wiggle to them. It will serve them better both in traffic and the open field. Ridley and Ford combined could give LSU a pair of blunt force objects to keep a power running attack going for four quarters. And, Ridley's also shown he can be a solid receiving option. In his lone start versus Arkansas last year he hauled in four passes for 30 yards, including some key plays on the game-tying drive in the fourth quarter. Giving Jordan Jefferson a safety valve like that out of the backfield might have helped him avoid some of those sacks last season.

3.       Russell Shepard. The reality is, as a receiver he's likely to be behind Terrance Toliver and Rueben Randle in the pecking order. So if he's going to get his touches (and I believe he will), it's going to have to come in the running game. Billy Gonzales may be the passing game coordinator, but at his last job they never had a problem giving their top receiver twice as many rushing attempts per game that he had catches. Look for Shepard to line up in the backfield early and often.

1.       Richard Murphy. I've never been one who put a ton of stock in the "Miles only plays seniors" meme - the Humanoids have built it up over the "new toy syndrome" of recruiting and an inability to distinguish playing time from who starts the game. And it wouldn't shock me if Murphy does start LSU's opener out of respect. The guy's a fifth year senior and respected in the locker room. Let me add, that it would be one of the great stories of the college football season if he were able to come up with a great year given his injury history. But I wouldn't bet on that. If we wind up watching Murphy struggle with a heavy work load over Ford or Ridley, then you can count me in the "seniority" camp. There's no reason to keep the younger players off the field this year.

2.       And that brings us to another X-factor of the position this season. What will new RB coach Frank Wilson's impact be? His reputation is as an ace recruiter (much like his predecessor), but Wilson's philosophy at running back has generally differed from Larry Porter. In previous tenures at Ole Miss and Southern Miss, Wilson had true No. 1 backs, like BenJarvus Green-Ellis and Damion Fletcher. Porter took the committee approach to the extreme, yanking backs on and off the field based on down, distance, formation, play call, to the point of nausea at times. If Wilson has a similar free reign, it will be interesting to see if the pattern changes.

3.       Who would have ever thought Quinn Johnson would be one of the biggest losses following the 2008 season? As much as the offensive line had trouble opening holes last season, another blocker clearly would have helped and when Dominique Allen showed up out of shape, there wasn't much of a backup plan. Allen seemed to dedicate himself to taking over the job this spring, but now he's suspended indefinitely. That leaves the aforementioned walk-ons and freshmen. And if LSU is going to have any sort of consistent rushing attack out of the power sets, somebody has to step up.