This video is entirely too short.

CAMP/SCRIMMAGE Reports: Still no word to the extent of Josh Downs' injury. As scrimmages are still closed to the media, all that we have to go on is what is released by the staff, which makes for some interesting stat lines.

So somebody threw a pick, but they don't want to say who. But don't go all conspiracy mode on these stats. After all, we just talkin' 'bout practice.

Other interesting sats: Richard Murphy seems to be warming up nicely into form going 61 yards on 6 carries for 2 TDs. Ron Brooks played at #2 corner for Mo Claiborne who was out sick. S Karnell Hatcher will be out 2 weeks with a knee injury from an earlier practice. Brad "Wing It" Wing had a 65 yard punt, and Jasper went 5-of-7 with a long of 48.

The Advoc has interviews with Tyrann Mathieu and talks to everyone else on the team about Drake Nevis. Meanwhile the Times-Pic reports the competition between T-Bob Hebert and P.J. Lonergan has become "a dead heat"

Bob Wynn's got some more thoughts on the QB situation. And while we are on it, we should be a little less surprised to hear that Barrett Bailey turned down scholarships to walk on at LSU. He's been going to University schools since kindergarten and his family has had season tickets since the Billy Cannon era.

NFLPA president, eight-time Pro Bowler, and former LSU OL Kevin Mawae came by to talk to the team about what it means to be a Tiger

In Feel-Good News, The football team met with some mentally challenged adults after practice on Wednesday and the basketball team is helping folks move into the dorms this week.

WAC-IMPLOSION UPDATE: Nevada may get out of a 5 million dollar Wac-desertion penalty just for being late with paperwork, and BYU (who still hasn't said ANYTHING official about this whole mess) may end up staying in a much improved MWC that will seriously threaten the Big East for it's BCS AQ spot (or at least an AQ spot of it's own, the BCS doesn't have to take one away to give to another, as far as I know). Bottom line La Tech fans, and I know you are out there, Fight your way into CUSA or be forced join the ULs in the SunBelt. Check out SBNation's Mountain West Connection for more as this unfolds.

A few stats on our new RHP/OF transfer Jimmy Dykstra. First off, thanks to his brother's profile at Wake Forest, we know he is not Lenny Dykstra's son, but he might be a distant relation.  From his JUCO stats page: In 55 games, 10IP, 10H 3ER 5K ERA2.530 with 1 win, batting .267 OBP.412 32H 24R 22RBIs, 6 of 10 Stolen Bases. It's hard to tell with the limited scouting I can do on the internet, but I'd guess he's going to be moved around a bit if he doesn't beat the current talent in the OF for a starting role. We'll know more as the season gets closer. LSUSports.net has a good summary of how everyone else's summer went.

Here's a read for all you poli-sci nerds out there from Johnny Reb.

WOOOOOO! Infant/Toddler Apparel National Championship Y'all! Speaking of, our friendly Asst AD informed me the license plates are nearly done, but would not confirm if they were Toonces-free. We will just have to wait to find out.

Holliday is working hard to make the Texans and is now trying out at WR.

Soccer is still the only team in action, with a home game Sunday afternoon against South Alabama. 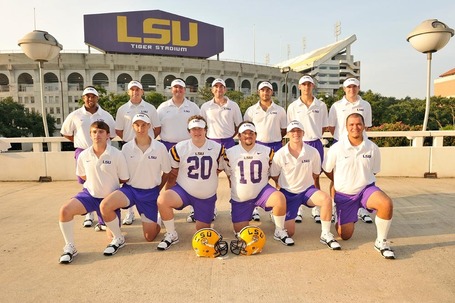