It's just under 2 weeks left in the offseason so we continue our series of season previews leading up to kickoff week. Every few days we'll preview a team on LSU's schedule this season followed by a mini round-table where we'll give you our takes on the important aspects of the game at hand. Each preview will have a poll where we'll ask you to pick the winner straight up. Next up, the WarPlainsTigerMenEagles, Auburn. 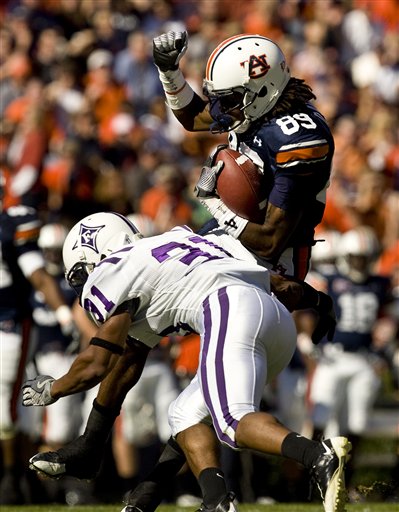 There are not enough pictures of Paladin football on this site.

Auburn fans have to feel good with what returns on the offensive side of the ball this year. All of their leading receivers are back, which should be a big help given the QB situation. JR Darvin Adams (60 catches, 997yds, 10 TDs) hopes to ride some momentum from last year's Iron Bowl performance after a minor letdown season (most of his sats came from just the WVU and FURMAN games last year.) SR Terrell Zachaery (26 catches, 447yds, 5TDs) finally got his career going last season and should be a solid #2 receiver again while SR Kodi Burns will continue to do a little bit of everything (receiving, rushing, and wildcat QB passing TDs last year). Behind them are quite a few talented, if unproven underclassmen, including SOPH DeAngelo Benton, who recruitniks will remember as the one that got away in the '09 class.

Meanwhile, an experienced O-line will make sure the only one to blame for poor running performance is the guy carrying the rock. Seniors Lee Ziemba (6'8" 319lbs) Byron Isom ( 6'3" 302lbs) Mike Berry ( 6'3" 316lbs) and Ryan Pugh (6'4" 297lbs) are some of the most talented O-lineman in the division. The only chinks in the armor are the new starter at RT, a JUCO transfer Roszell Gaydon (6'6", 315lbs) who is said to be plenty talented to run with this crew, and Mike Berry's lingering knee injury, which put a dent in his offseason but seems fine now. If Chavis's small but speedy defensive line isn't working by this point in the season, it will be a huge mismatch and probably the story of this game either way. 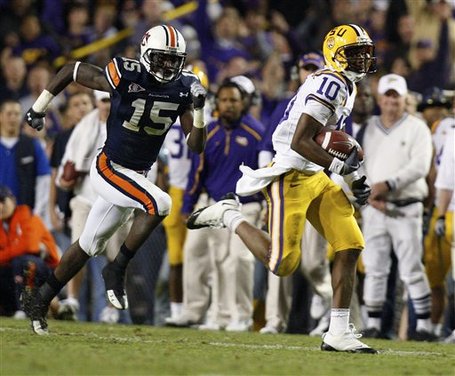 We weren't the only ones to see our offense shine against Auburn. They gave up 20 points or more in every game except La Tech last season (including the above mentioned Paladins. Sure, they beat them 63-31, but think about it. 31 points to FURMAN) A lot of those problems can be attributed to a secondary that just could not stay healthy last year. JR Neiko Thorpe (84 tkls, 2 INTs) was the only starter to make it through the year unscathed, followed by a host of talented upperclassmen who missed half of the year or more and a few rookies who showed some promise in their limited starts. The hope is that the starters stay healthy and build some consistency, but they have some semi-experienced depth now if the injury bug returns.

The D Line mostly returns experienced JRs and SRs and has enough depth to see some heavy rotation, especially at the Ends. They were not impressive last year, giving up 25 rushing TDs on the season and at times a lot of rushing yards to teams they shouldn't have like Arkansas and Kentucky. However, they showed much improvement down the stretch, holding Bama to under 100 rushing yards, one of the key factors that kept them in that game. They'll want to try and keep that momentum going this season, but it will take a few games to tell if they have gotten over their inconsistency. Meanwhile, Auburn's starting linebackers were very solid performers last year, and SR Josh Bynes (lead the D with 104 tkls, 5 for loss, 1 INT) will continue to be an all over the field enforcer. If they can find some talented subs to make sure the starters aren't run ragged again, they should have a great season.

One of the big questions for Auburn this year has to be how will they respond after losing the bulk of their offensive production from last season. Cameron Newton should be starting at Florida this year after a few seasons of being a Tebow protege', instead he had some legal trouble that sent him to JUCO before transferring to Auburn and immediately moving into the starting role. He didn't lose a step, gaining the required insane stats (2,833yds, 22 TDs passing, 655yds, 16TDs rushing) as he led a team to the JUCO title. Make no mistake, he is an SEC-caliber QB and will have blossomed into a force by the time we see him. And if he strays from the straight-and-narrow path again, long time backup SR Neil Caudle and some great prospects will all be fighting to take his place.

Recovering from the loss of RB Ben Tate (1362 yds, 5.2 average, 10TDs) will be less difficult, though none of his potential replacements may match his production. Onterio McCalebb is the pure RB candidate, last years statistical #2 who was great early, but saw limited work after an ankle injury and Tate's emergence. At 5'10" 175lbs, he's not a power back, but he should do well in rotation with FR Michael Dyer (5'9" 215lbs), a speedy and fearless runner who wasn't afraid to take a hit in HS. The wild cards will be SR Mario Fannin (285yds, 8.4 average) and JR Eric Smith (99yds, 4.9 average, 1TD), both ~5'10" ~230lbs, who both spent time at TE last season (Fannin 42rec, 413yds, 3TDs, Smith 18rec, 226yds,1TD). Having proven dynamic options like that could really help take the pressure off of other parts of the offense.

Our best win over a talented SEC opponent, everything seemed to go right for us in this one. From the shutout 1st half Defense to a passing game that was finally working. A night and day comparison to the Florida game 2 weeks before.

Auburn has a myriad of guys on offense who can do a little bit of everything. How do you scheme defensively against a team that has so many options to work with?

Poseur: The same way every team with a functional defense did last year. Auburn had a good offense last year, but they tended to rack up yards against bad teams and be merely good against top defenses. LSU held them to 10 points, so perhaps I'm a bit jaded, but I don't view the Auburn offense as some unstoppable juggernaut. You stop them by having lots of fast guys who wrap up and don't miss tackles (/checks our defensive depth chart)... yup, we should be okay. I think Auburn is the most overrated team in the country. We are talking about a team coming off a 3-5 SEC campaign that lost its two best offensive playmakers? And still has no defense?

Paul: Auburn's hallmark last season was their running game, headed up by the underrated Ben Tate. Going into this season, they don't have that prominent returning feature back (returning being the key word), but do have experience at WR. How will Newton transition? Does Malzahn transition this team into more of a spread passing attack rather than rushing attack? I'm one of the few who doesn't feel like the Newton experiment will be a smashing success. He's certainly talented, but Malzahn seems to thrive with accurate passers, and that's not really Newton. I think that could limit their offense, despite having a stud freshman running back in Dyer and some super talented receiving talent to boot.

For LSU specifically, our defense should combat them well. We aren't overly big, but we're fast. This should be one of the "fastest" games of the 2010 season.

How much better do you feel knowing Josh Jasper is the kicker on our side going into Auburn?

Paul: This game always seems to come down to FGs, doesn't it? Having Jasper back there is like playing Russian Roulette with two bullets in the chamber... just that little bit of extra that could finish the job.

Poseur: Honestly, I don't think this game is going to come down to field goals. This isn't the game I'm thankful for Jasper (UNC, a game in which yards will come at a premium... that's a game I'm thrilled to have Jasper).

Paul: That sounds like a walk-on's assignment. Dennis Johnson, get your knee-diving technique ready!

Poseur: We should never stoop to Tuberville's near inhuman level of scum. I really, really hate him. I blame him for the chop block on Dorsey. My deep-seated hatred of Auburn has decreased since Tuberville left, but I find myself hoping Texas Tech goes 0-12.