Recruiting is a fickle business and the art of spotting talent is hardly a finely tuned machine. Even the top recruiting services, who possess tremendous resources and knowledge, miss out on players that eventually grow into superstars (see Darrelle Revis and D'Brickashaw Ferguson). Lightly recruited players turning into superstars shouldn't surprise anyone. And that's not a knock on recruiting services anymore than it is on all the NFL Franchises that didn't think Tom Brady was worth anything more than a 6th Round pick, including the New England Patriots. It's the nature of the game - judging how a player will mature, what his intangibles are, etc., is a tricky matter.

When I look up and down the 2010 LSU class, there's levels of expectation for each guy (generally based more on the stars next to their names than anything else). If I had to put my finger on the one guy in this class, who in three years we may look back and say, "Oh wow... we all really missed on that one," it would have to be Alfred Blue. 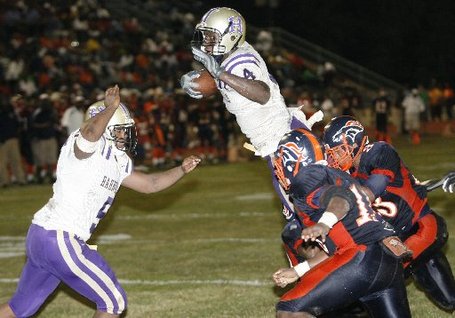 via hssn-media.advance.net
Blue has the frame and rugged running style to emerge as a feature back.

Spencer Ware is the back everyone expects to be an eventual superstar at LSU (and rightly so). I raved about him here. I expect Ware to see the field both as a RB and as a Wildcat QB this season. After Ware, fans drool over Jakhari Gore and his big play potential. And then attention turns to the 2011 studs, Kenny Hilliard and Jeremy Hill.

But what about Alfred Blue? All he did was abuse Louisiana 5A High School football last year to the tune of 1,695 yards and 25 TDs. He also flashed the ability to catch the ball out of the backfield, snagging 13 catches for 200 yards. Blue is also a well-built, 6'2, 208 pounder. Yet, Blue was a later offer for LSU (meaning he didn't snag an offer during the summer) and didn't commit until December. He's ranked as a 3-star by all the major recruiting services. So where's the disconnect from a guy with that size and that production to be ranked so low?

I'm guessing his lower ranking revolves around a perceived "lack of upside." Many question Blue's long speed (which, by the way, is the most overrated RB attribute around). Otherwise, I fail to see any glaring weaknesses in his game. It comes as no surprise to me that Blue has been impressive in early workouts and reportedly delivered the most impressive run in one scrimmage.

Blue is a big, physical back. What he brings to the table is a one-cut and go running style that most reminds me of LaBrandon Toefield. The biggest hurdle he must overcome is his upright running style. Blue runs behind his pads pretty well, but if he doesn't learn to get his shoulders down, he's going to take some awfully punishing blows.

Otherwise, his build and tools should allow him to really blossom at LSU. When LSU landed Blue I was convinced he would be an eventual LBer (Chavis has a track record of turning great HS RBs into studly LBs). But my view was short sighted at the time. Blue may still get flipped to LBer, but I'm much more confident in his potential to remain at RB.

We know that Miles is a fan of the big, bruising RB, and Blue fits that mold. He'll likely be permanently tied to Spencer Ware, unless Miles opts to redshirt Blue this season (for what it's worth, Blue has been running with the RBs, not the scout team in practice this week). Do I think he sees the field this season? Absolutely on special teams and potentially late in some blowouts.

High End: Blue takes the reigns of the starting position by his Junior or Senior year and gives LSU Joseph Addai type production (hopefully without the injuries) when he plays. There's potential for him to be an All-Conference type of player if the touches are there, but I don't ever expect him to be an exclusive feature back.

Low End: Becomes a member of the committee of talented running backs in the LSU backfield without ever fully asserting himself as a major contributor.

Realistic: I expect Blue to contribute as early as this year and see his role steadily increase as he ages. Many will suspect he gets ousted by all the super-talented RBs coming up through the pipeline. However, I expect Blue to distinguish himself as a hard-running playmaker that can really do damage if used properly.