It's Not So Bad Being Trendy

Share All sharing options for: It's Not So Bad Being Trendy

The preseason consensus right now ranks LSU as the #18 team in the country.  The Coaches rank LSU #16 and the AP ranks the Tigers at #21.  I think those rankings are perfectly fair and on top of that, I could really careless what our preseason rank is.  What matters is your final rank (#17, last season, if you recall).

Frankly, most teams are a total jumble and since the preseason poll is nothing but a guess anyway, people are bound to guess differently.  LSU can safely call itself one of the teams in the "field".  We are not one of the early line favorites, and there's not a person I know of who thinks we should be.

Well, yes.  But that's mainly because LSU had a terrible 2008.  LSU's win totals in the last four years have gone 6 - 6 - 3 - 5.  One of these things is not like the other.  Essentially, the 2008 Tigers were not a very good team (you are what your record says you are), but people bought into the brand and the big Peach Bowl win and talked themselves into the 2009 Tigers.  LSU spent the first month and half of the season ranked in the top ten, even climbing into the top five, mainly due to the lack of anyone else to rank.  At the end of the year, LSU finished at #17 and the overall perception was that the team had underperformed its preseason hype.

The thing is, the 2009 preseason hype was unjustified.  The team did improve, substantially so over the previous year, but the year is classified as a down year because it wasn't the top ten prediction many prognosticators had for LSU.  This year, not to be burnt again, the preseason consensus is over-correcting.  The media consensus underestimated how far LSU had fallen in 2008, but they've gotten around to accounting for it, even if it is a year late.  Throw in a bowl loss, the standard element of an underrated team in the preseason, and you have the recipe for dropping LSU like a stone in the polls.

My pet theory is that those who are most pessimistic about the Tigers are those who were most optimistic last year.  If you just wrote off 2008 and thought LSU was going to slide back into national title contention, well, 2009 was a wake up call.  But for those of us who were cautiously optimistic last year, a 5-win SEC campaign resulting in a trip to Orlando was actually a positive result.  I view 2009 a lot more positively than most, but then I didn't think we were going to contend last year (mainly due to Alabama and Florida being awesome).  It was a year in which LSU picked itself off the mat and returned to its winning ways.

Yet I think I'm in the minority in viewing 2009 in such a positive light.  Sure, the clock management issues were infuriating, but those are correctable errors.  The team lost two games because of clock management - that's actually a sign a team is likely to improve, not get worse.  And while the gaffes were plenty embarrassing, bad clock manager does not equal bad coach.  I really do think this has been blown all out of proportion (just as Les the Crazy Gambler was also way out of line with the facts).

But Les has taken plenty of deserved criticism for his inability to call a timeout for 15 seconds after a sack.  Hey, that's indefensible.  Fix it.  And I'm not mad at that criticism, what is irritating me is this belief that Arkansas and Auburn are these programs on the rise who have now passed LSU.  Well, let's look at the four-year trend after the jump: 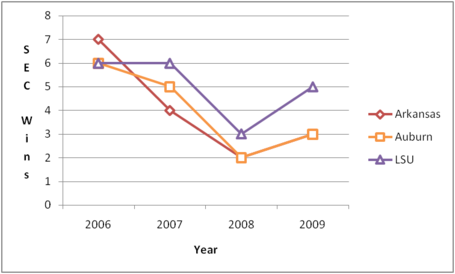 Arkansas and Auburn both saw their win totals decrease each year over a three-year period, only to rally back last year and pick up one win, which is still lower than their 2007 win totals.  Both Auburn and Arkansas, despite improving by a win, have both experienced two straight losing seasons.

LSU suffered a big dip in 2008 of three wins, but picked two of those wins back up in 2009.  LSU's 2009 win total exceeds every one-season win total by Arkansas over the past three years.  It exceeds Auburn's past two seasons and ties their 2007 win total.

In addition, Auburn has not posted a higher win total than LSU in the same year since 2004, when they went undefeated.  LSU has been the better team each of the last three years, and they have been at least tied with Auburn's win totals for five consecutive seasons.  That's a trend.  Even when LSU had their terrible year, they still maintained their advantage over Arkansas and Auburn.

Arkansas and Auburn did not catch LSU last year.  They did not even keep pace with our improvement.  They actually LOST ground, as LSU improved by two wins to their one win, respectively.  I'm not saying that trends will determine this season (and we better hope not given Alabama's recent trend), but if someone is giving how the team is trending as a reason to pick against LSU and pick Auburn and Arkansas... then they must be looking at different trends than I am.