It's just under 4 weeks left in the offseason so we continue our series of season previews leading up to kickoff week. Every few days we'll preview a team on LSU's schedule this season followed by a mini round-table where we'll give you our takes on the important aspects of the game at hand. Each preview will have a poll where we'll ask you to pick the winner straight up. Next up, the best Non-Conf Home and Home series we've had in quite a long time, West F'ing Virginia. 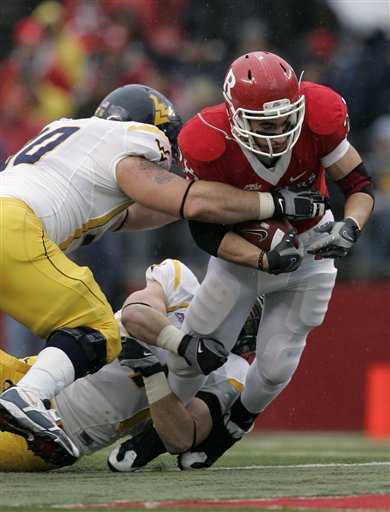 How will the best defense in the Big East stack up in the SEC?

If the 1st few games of the season are merely buildup to prepare for the meat of the SEC slate, then this is the Mid-term Crowton, Miles, and Studrawa are fearing. Made of experienced Seniors Scooter Berry, Chris Neild, and Julian Miller (who led the team with 9 sacks last year), the D-Line has the ability to stop a running game cold, holding opponents to just 127 yards per game. Their Linebackers had no trouble getting in the backfield and helped the team reach 29 sacks on the year. SR LBs JT Thomas and Pat Lazear were the team's leading tacklers with nearly identical stat lines, combining for 11.5 tackles for loss. They also return experienced corners and safeties that held a 53% percent completion ratio and 17 INTs on the year, the main threat being JR FS Robert Sands, a huge safety at 6-5, 220lbs., who led with 5 INTs of his own.

They aren't as full of the NFL ready talent UNC has, and the depth chart is weaker comparatively, but WVU is likely one of the top 5 defenses we will see this season. An impressive offensive performance here will do wonders for the team's and fan's confidence going into a tough October. 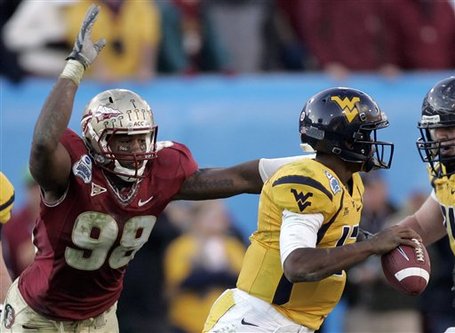 Geno Smith will be doing this a lot this season

It's not really fair to judge Soph QB Geno Smith as a weakness before his first full season at the helm, but it's not going to be easy for him to be a successful passer. After some great years with rushing QB Pat White, HC Bill Stewart tried to add more of a passing attack to their game last season (probably sensing that Noel Devine would be on his way to the Draft) with mixed success. Jarrett Brown led a competent passing attack for over 2,000 yds, but an O-line still built for a runner let him get hurried out of the pocket too often, leading to a 11 to 9 TD-INT ratio and 24 sacks. Luckily, Brown had dual-threat ability, which led to 4 yards per carry with 6 TD's, a nice power running compliment to Devine's fleet-footed escapism.

By all reports and from what we saw in his limited playing time last year, Smith is much more of a pocket passer, which will be a problem behind that experienced but nearly unchanged from last year O-line. He will have good targets in Jock Sanders (last season's reception leader) and TE Tyler Urban. Whether he has enough time to throw to them behind a line that has not proven it can adequately protect him is the big question mark for the Mountaineers this season. 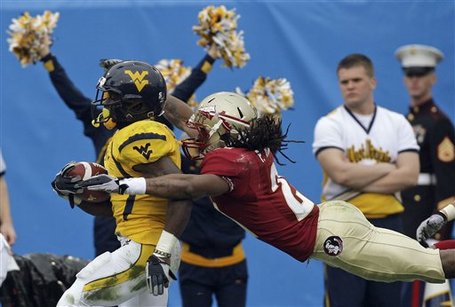 Noel Devine is hard to tackle

Some may scoff at the notion of Noel Devine being anything but THE main topic when it comes to talking about the Mountaineers. True, the impossibly speedy SR RB is the name you always hear in the highlight reels, and he will likely be even more the face of this team once WVU comes to town. Some were puzzled as to why he opted to come back for his senior season, but given the looming QB issues I've mentioned, it's a no brainer. He will be the heart of the WVU offense and has an opportunity for some gaudy stat lines if he stays healthy. His O-line isn't that great, but with his speed and maneuverability, he's never really needed their support, averaging 6.5 yards a carry for his career. The only real question is, how good can he be if he doesn't have the passing game support that keeps defenses honest.

Again the loss of Jarrett Brown leads to concern as he was their 2nd leading rusher last year. Behind that was a rarely used fullback and a few receivers who took the rock when Devine was briefly injured last year. Devine's true backup, Shawne Alston, only had 6 carries last year. That's a shocking lack of depth for what will be the bulk of WVU's attack this season.

When Last We Saw Them 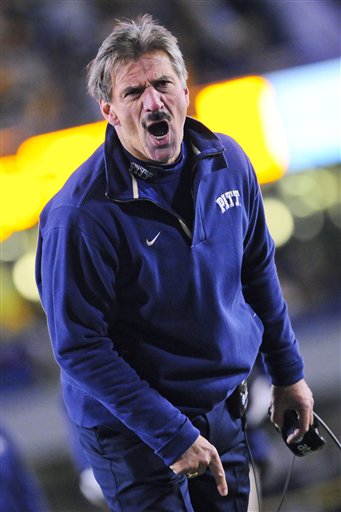 We are all still in debt to the Wannstache

We have never played WVU before, but we certainly have all seen them before. If Poseur's first ulcer is named "2007" then certainly a second, smaller but more intense one is named "December 1st." On the same day that gave us "Damn Strong Football Team" a majority of LSU fans, still high after winning the SEC Championship, sat down to watch the 100th Backyard Brawl and WVU probably play themselves into the BCS Title game. What followed was a stunning upset by Pitt that threw the postseason into chaos and cleared the way for LSU to play Ohio State for the title in New Orleans.

Otherwise you may have seen them when they visited Auburn for a game that may be a bell-weather for ours. Despite a season worst 5 INTs, WVU managed to hang on with over 500 yds of offense, but eventually succumbed to the Plainsmen in a 30-41 loss at about the same time last year.

I'm expecting the Noel Devine Variety Hour in this game. Can our new look defense contain him?

Billy: I can’t imagine what it’s like for defensive coaches preparing for a back like Devine (or, for a recent SEC comparison, Darren McFadden), because it feels like an inevitability that he’s going to do something. You can stop the guy on nine straight carries and the tenth might still be an 80-yard touchdown. But this is also a situation where having a smaller but faster defensive front comes in handy. Plus, with the Mountaineers breaking in a new quarterback the defense can afford to sell out for the run a little more often.

Paul: The defense this year seems predicated on speed. We have two, undersized, speedy OLBs. We have two former corners manning the safety spots. And two tremendous athletes at the corner position. Miles says we have more speed at the ends than any point in his time here, and that seems reasonable. Now, the scary part about that speed is will they have a tendency to over run plays? Devine is the type (as you alluded to) that is as shifty as he is fast, and if he makes you miss, he can make you pay. I expect the strategy going in will be to contain Devine and make WVU beat us through the air. As such, I expect to see a lot of gang tackling. "Put a body on Devine" should be the mantra.

It's as if we intentionally scheduled OOC teams that will expose O Line weaknesses if we haven't improved since last season. Give a rough estimate of how our running attack does in this one.

Paul: WVU runs that 3-3-5 defense that we see Florida run a lot. They aren't overly big. Julian Miller (6'4, 260), their leading sacker from last year, returns, at one of the DE spots. Scooter Berry (6'1, 287) steps into the other spot on a full-time basis. And Chris Neild (6'2, 301) mans the NT spot. LSU has a major size advantage and should be best served by going right at WVU. Miller can really wreak havoc in the backfield (9 sacks, 14 TFLs) so containing him will be key to get the offense into a groove. That will be a mighty big challenge for Alex Hurst.

Billy: The mistake coordinators always seem to make with 3-3-5 defenses (and fast defenses in general) is they over think trying to exploit the speed with misdirection. Just KISS and run the ball right at them. The question is whether or not Crowton has the word "simple" in his vocabulary this season.

The 1st Annual International Trappers and Taxidermists Convention may prove to be THE tailgate of the season. Over/Under on 4 couch burnings.