Better Know a Freshman: Jakhari Gore - Mr. All Production Back

Share All sharing options for: Better Know a Freshman: Jakhari Gore - Mr. All Production Back

Last year's recruiting season for many was spent hoping and praying for the commitment of talented Temple, Texas RB Lache Seastrunk (and early on, Michael Dyer). Seastrunk spent the previous Spring rapping on LSU, his family there, and how it "felt like home." As we entered the summer, the picture grew more dim, and Seastrunk went bananas for limo rides and TPing. Some remained confident, others rued that Miles was our head coach and claimed he had even lost his recruiting mojo and those who really followed recruiting closely knew that Seastrunk was just another back in just another class (just like Joe McKnight).

Into the fall, a new leader emerged for Seastrunk in Oregon and on December 9th, when Jakhari Gore pledged to LSU, the love affair with Lache was effectively over. Many crowed about LSU taking a risk on a smallish back (5'7, 185) with poor timed speed when they could have had a blue chipper like Lache Seastrunk. Why do that, you ask? Well, the story is in the numbers. 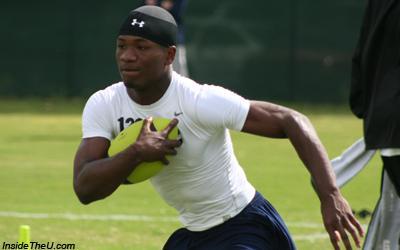 Gore's size is a question mark for many, but it shouldn't be as big of an issue as imagined.

In high school football recruiting there are three meccas: California, Texas and Florida. They earned this right through the sheer number of recruits and the high level of talent they produce on a yearly basis. Within those broad regions, certain areas are further saturated with superb talent. Jakhari Gore comes from one of those regions.

However, simply taking a risk on a player from a region would be foolish. Jakhari Gore didn't just play in one of the most talented football counties in the country... he dominated it. This should give you an idea of some of the talent coming from the area. Just last season, 40 players from Miami alone signed D1 offers. And against that competition Gore was able to do this:

Just let it soak in that the little guy from Christopher Columbus High School, who lacks elite speed, racked up 12 yards a carry. So how'd he manage to dominate, and rip off so many huge runs if he lacks top-notch speed and size?

Well, he's wretchedly quick. Just check out the tape for yourself.

Honestly, I'm a little bit shocked by reports that say he doesn't have sprinter's speed. In most cases, the 40 is all about the start, and the one thing Gore doesn't like in his explosion in and out of cuts (much like Spencer Ware). He gets to top speed very, very quickly, which is truly a more important trait than being able to run a 4.3.

What I like about Gore is that unlike most guys his size (who basically try and sprint to the sideline and run up it as fast as they can), he's extremely patient. Sure, he'll try and take the ball outside, but he only does that if he can follow a blocker out there. You've heard of linebackers playing with "their head on a swivel." Gore plays with his head on a swivel. It's the defining quality of both his and Spencer Ware's game: vision. Both have it in spades. Gore is constantly looking for blockers or a small crease to explode through. And when he does... goodbye.

I've seen many say that Gore will never be anything more than what Trindon Holliday was for LSU. They cite his size for the reasoning. Besides the fact that that is an entirely too easy (read: not good) comparison, I just don't see it. The two players are hardly similar. Trindon was 5'5, 165 pounds. Pretty well put together for a guy that height, but Gore has 15 pounds on him... already.

How about another shorter back, with a similar skill set. I see Domanick Davis (er, Williams?) all over him. Davis lacked prototypical size and speed as well, but made dude with superb quickness and excellent vision. You can see from Gore's tape that he may not be big, but he's tough. He will pound the ball up the middle. He can take a hit, and often absorb a blow and keep going. If he's 178 right now, there's no reason to think he can't be around 198 by his senior year. They may be a tad heavy, but a guy with that type of bulk should be able to handle an SEC beating.

Did I mention that Gore is the cousin of 49ers stud running back Frank Gore? Frank Gore himself is only 5'9 and lacks elite speed as well. It hasn't seem to hindered his success.

As for his weaknesses... well, size. But I'm not sure that's as great of a weakness as many continue to suggest. He's short, but not tiny. Trindon was tiny. Gore is short. Which can actually be a tremendous asset when hopping through trash. His lack of long speed may keep him from busting out 80-yard TDs, but it won't stop him from ripping off 20+ yard runs.

I'm not sure Gore will ever be the focal back, as Davis was in 2002, but he can certainly be a complimentary piece to bigger backs in Jeremy Hill, Kenny Hilliard, Michael Ford and Spencer Ware.

Gore was recently academically cleared, which is great news. I can see him stepping in and making an immediate impact as a kick and punt returner, something LSU hasn't had of the elite variety since Skyler Green (I know Trindon scared people, but he wasn't really a great returner). He seems like the type of player whose role will grow on a yearly basis as he slowly earns more and more touches. How frequently he is used will largely depend on how much good weight he can add throughout his career... without sacrificing his quickness (we don't want a Shyrone Carey clone here).

High end: He could end up being the ultimate all-purpose back, running and catching out of the backfield, and a dangerous fastball to the nasty off-speed stuff we typically throw at opponents (power rushing attack).

Low end: Like every other player who lacks bulk, he may be irrelevant, or relegated to few big plays here and there. We've seen this we smaller backs and receivers under Miles, but is that just the players lacking talent, or the coaches not knowing how to effectively use them?

Reality: Our main ST threat as a returner as early as this season, and a dangerous option in our offense over the years, though never becoming an every-down back. He will be a player just as effectively used as a "fear factor" than actually touching the ball.