What ATVS Did On Your Winter/Spring/Summer Vacation

Share All sharing options for: What ATVS Did On Your Winter/Spring/Summer Vacation 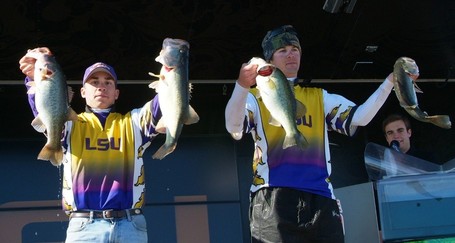 Here at ATVS, we consider ourselves fans of everything in purple and gold no matter what the sport (Note our occasional coverage of LSU Fishing and LSU Hockey) but we realize most of you are just here for the football. That's perfectly fine, but as most of you are coming back to the site for the first time since the bowl game this week, allow me to share with you some highlights of the great stuff you missed while trudging through the desert that is the football offseason.

Poseur completed a wonderful series on the All-Sport 30 Greatest Tigers of the Decade, Billy sat down for a talk with Shea Dixon, JACK HUNT! earned a trip to the Super Bowl, Pittman schooled us all on why we shouldn't get hyped up on losing a star recruit, and Jrlz kicked a hole in a door.

We had a great Signing Day, came to grips with a future of R Sheppard at WR, Poseur explained why we are the Yankees of college baseball, and we all tried to forget the grind of a horrible basketball season.

Poseur let a Kansas baseball blogger have it (yes they exist) but we saw the beginning of the pitching woes. We Fought Communism (and won), tried to do our part to help with The Death of Toonces (still no word on those plates, btw), and screamed while the spring game was pre-empted by softball.

Right field at Alex Box is no place for an opposing player, I put together the annual Mix-Tape (warning, slow loading link), Poseur decided to troll the Bammers while I was watching them get destroyed in person. It was downhill from there as I figured out exactly why the 2009-2010 athletic season was a bust. We also dealt with the first bit of conference expansion.

Billy did a fantastic preview of what Gonzales could bring to the table this season, Things got worse for baseball, I pondered what we would need to be at last call in Rosenblatt, and we stormed through the SEC tourney.

I questioned the logic of UCLA hosting, though in the end it was all for naught. Jrlz did a great series previewing the Basketball roster. Poseur jumped head on into the Great Expansion Gambit, practically starting the A&M to SEC movement by himself. We got a new recruiting guru, and I went to the CWS finals.

I enjoyed the final night in Rosenblatt, Paul began a series about all of our incoming freshman, though he could have picked a better one to start on. Poseur got married and Pittman sent us a dispatch from the hotel. And somewhere down the line, we completely sold out to The Man.

A huge month for preseason analysis. Billy broke down every position, I previewed every matchup up to the bye week, and Poseur revamped the ATVSQBPI. Then on Aug 16th it all came crashing down.

So what does the future hold? Will this great coverage continue? And for those of you who vanished in November, Where the hell did Pittman go?

Pittman is still lurking around and I'm sure will send us occasional thoughts when he can, Billy, Poseur, Paul and myself will continue to do our best in covering what should be a pivotal year for the Tigers. The Geaux Show returns to it's nearly twice a week schedule this Wednesday, and the drunken Saturday morning ramblings LIVE from the Parade Grounds will assure that we keep making fools of ourselves.

So take a seat and hold on. It's gonna be a great season. And maybe afterward you can stick around for the other good stuff.