When you look through our recent signing classes, you'll notice the classes are built with a foundation of in-state players. As LSU fans, we're fortunate to reside in a talent-rich state that literally breeds NFL-caliber athletes. As a result, the backbone of our roster is almost always built by in-state players. The rest will be filled out with regional recruits, typically hailing from Texas, Mississippi, Alabama and the like.If we're fortunate, we may nab a player or three from Florida (we love you Patrick Peterson).

But for the last two season's Les Miles proved the reason his hat sits so high on his head is due to the Signing Day surprises he loves to pull out. LSU isn't exactly a national recruiting power. Sure, they'll land the occasional player from way the hell away, but it's not routine as it is for Florida, USC and Tennessee (out of necessity for them). So when a player from the East Coast comes on the radar, most immediately write them off to the distance factor. But the recent signings of Sam Montgomery and Ego Ferguson may be changing that tune. 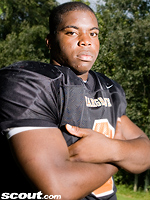 Ego should be a building block that helps restore the LSU DL to dominance.

It was a legitimate shocker when Montgomery pulled the LSU hat (which was followed by some serious excitement that he was trying to sway Trent Richardson). Equally as shocking was Ego Ferguson doing the exact same thing from New York, a year to the day later. Few would have penciled Ferguson into their mock recruiting classes even a month before that day. Most had written him off, as people claimed Cal was the leader due to academics or Miami due to family. But Miles and company stayed persistent, and that persistence was rewarded (both he and his father attested to this).

That type of diligence is an effort to rebuild the LSU defensive line one top 100 recruit at a time. Montgomery looks to have locked down a starting position already as a RS Freshman, and he spent the Spring terrorizing our offense. Ferguson is fresh-faced stepping on campus, but at 6'3, 272 pounds, he's physically ready to play now. Additionally, Ferguson comes from Hargrave Military Academy (the high school team, not the glorified Junior College version). Hargrave takes pride in churning out athletes that more mature and responsible than when they came in.

At Hargrave, Ferguson's level of competition far exceeded that of most high school athletes. Since Hargrave is a typical placement grounds for elite D1 schools, Ferguson got to practice and scrimmage against multiple D1 athletes as a Senior in HS. All this to say: he should be further ahead than most freshman who step on campus.

Ferguson spent most of the year as a 5-star prospect before taking a slight plunge at the end of the year for unforeseen reason. U.S. Army All-American, first team All-State Virginia as a Junior, SuperPrep All-American... the list of plaudits goes on. Rivals ranked Ferguson as the 5th best pass rushing DE in this class, despite the fact that he is already 40 pounds heavier than any others on the list. They also ranked him 5th best against the run and 4th quickest step.

So what kind of player is Ferguson? To me, this is the complete defensive end. Ferguson will be equally adept at stopping the run and rushing the passer. What I love is his size. At 6'3, 272, Ferguson is already as big as Pep Livingston was last year... as a Junior. At times last season, LSU played a DE in the NT spot in Nickel situations to gain additional pass rush. Ego seems ready-built for this role, even as a true freshman. He's got a bevy of pass-rushing moves already (as shown in this Rivals video of top DE camp performances). A player who has both size and skills at this early juncture is an obvious candidate for immediate playing time.

Where does he fit on the depth chart? At DE we're currently only five with Ken Adams, Sam Montgomery, Lavar Edwards, Chancey Aghayere and Barkevious Mingo all likely contributing to the rotation this year. Fellow incoming freshman Jordan Allen is also listed as a DE, but I'm curious to see how long that experiment will last. If LSU wants to keep their bodies fresh, there's a great chance Ego will earn playing time right away. Mingo still isn't likely big enough to be an every down player. Aghayere played last year with mixed results. Edwards showed tremendous flashes, but was largely inconsistent. Adams is the new kid in town, and if he's not playing immediately, he was a wasted scholarship, plain and simple. Montgomery has literally played and worked himself to the top of the depth chart. There is no reason Montgomery shouldn't be getting a bulk of the playing time.

So can Ego find his way into the rotation? I think so. His size gives him the versatility to be a DE and a DT in a pinch and situationally. Now, if the staff sees him and thinks he's a better fit for DT, we could very well see a RS while he works to add bulk. However, I don't see that as likely. A large reason Ego pledged here was the opportunity to play right away. Chavis wants to field the best. If Ego comes out and works and shows his skills, he'll be on the field this year and offering the Tigers another difference maker from the defensive line.

High End: Ego contributes as a pass rusher as a true freshman, and expands his role each year afterward eventually becoming an All-Conference (if not All-American) performer and top two round NFL draft pick.

Low End: He becomes another body in the defensive line machine and a solid role player throughout his career.

Reality: I think Sam Montgomery will be a star. I think Barkevious Mingo will be as well. But I think Ego will be every bit as good as both. He doesn't have the raw speed that either of those two bring to the table, but he's much, much more refined as a player. Ego's skills will get him on the field early, and he'll be a household name going into the 2011 season and one of the many weapons people discuss when the subject of our DL for the next four years.