Share All sharing options for: 2010 Football Position Previews: The One Where Billy Chooses Theme Music – Linebackers

Linebacker may be the position at which LSU returns the least amount of experience, however, 2010 will also represent the...


...because for the first time since Bradie James circa 2002, the Tigers have a legit baddass manning the middle linebacker spot in Kelvin Sheppard.

If you're only going to return one starter at linebacker, it might as well be one of the SEC's best. Kelvin Sheppard returns after a breakout 2009 in which he had 110 tackles and 8.5 tackles for a loss. If there's a player who gained the most from having John Chavis as his coordinator, it's Sheppard, who went from an inconsistent and oft-out-of-position youngster in 08 to one of the leaders of the LSU defense.

It's fair to say the defense is truly his this season, as he'll be looked for to run the huddle and keep some young teammates in line, much like James did back in the day. Six-three and 240 pounds, Sheppard is the classic Mike linebacker, controlling the A and B gaps while still showing decent athleticism dropping down the seam. He uses his long arms to shed blocks really well, and while he's not the same sideline-to-sideline runner James was, he can help string plays out for the outside defenders to make. The one element he could improve from last year was a small tendency to miss a tackle from time to time, but ratchet that up and he could contend for All-American honors come December. Plus, he's just one scary looking dude. 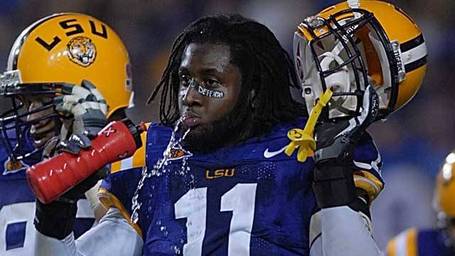 What's that Kelvin? No, I never said you were scary. Not me. No sir.
via image.cdnl3.xosnetwork.com

The other reason it's good to have a fifth-year senior running the huddle is that he'll be flanked by first-time starters in juniors Ryan Baker and Stefoin Francois. Baker has a real chance to be a breakout player. He's been a special-teams demon for the last two years, and even made a handful of big plays in the defensive lineup last year - contributing a tackle during the Mississippi State goal-line stand and picking up a sack versus Auburn. Baker definitely has the speed to fit the weakside linebacker role (he may actually be an upgrade over Perry Riley in this department), but the question with him is going to be size. He's generously listed at 6-1 and 227 pounds, and he's not the only one for whom that concern applies. On the strongside, Francois will be making the strong-safety-to-linebacker move much like Harry Coleman did last year. On the upside, Coleman excelled at the spot and Francois may be a little more athletic (he played linebacker, safety and even corner at times at East St. John and was an Army All-American), but he definitely struggled in the spring game and reports generally haven't been great. Whether he'll have as much open space as Coleman enjoyed with a smaller defensive line in front of him is a question mark.

The first guy off the bench will be redshirt freshman Kevin Minter. A 6-1, 225-pound native of Suwanee, Ga., Minter had a strong showing in the spring game (14 tackles), and followed that up by dropping 15 pounds this summer. He's the listed backup to Sheppard at middle ‘backer, but word is that John Chavis will use Minter in a reserve role similar to Jacob Cutrera last year, and it's not out of the question for him to take one of the outside starting jobs.

1.       Leadership. If you've ever watched the team warm up, Sheppard is the man in the middle of every group doing the classic Ray Lews get-em-pumped-and-ready dance.

2.       Speed, speed, speed. As much as we've talked about size being a concern, one thing's for sure - there won't be many offenses that can run by this group.

3.       John Chavis. Reviews of his first season were mixed (and the Humanoids consistently misunderstand the man schematically) but there's one thing the man completely earns his salary doing and that is coaching linebackers. For some perspective, in 2008, LSU's starting linebackers (Sheppard, Riley and Darry Beckwith) combined for 175 total tackles and 13.5 tackles for a loss. In 2009 the starting group of Sheppard, Riley and Harry Coleman combined for 289 tackles and 22 TFLs. And that's not counting Cutrera, who added another 81 tackles and 6.5 TFLs in heavy playing time, though he was technically not a starter.

1.       Size. Certainly the elephant in the room (now there's an ironic term) for the defense this year. Small linebackers can excel behind a big defensive line that can hold blockers at the point of attack, but LSU's starting four may not feature a single 300-pounder.

2.       Experience. Not only is Sheppard the only returning starter, but all three backups are redshirt freshmen (Minter, Lamin Barrow and Tahj Jones). There's certainly talent there (and true frosh Justin Maclin may force his way into the two-deep), but there won't be much of a grace period for them to get on the same page.

3.       Depth. See No. 2. An injury to one of the starters and LSU will be starting a redshirt or true freshman at linebacker this fall.