Quick: tell me which position has been better recruited for the last three years than defensive back? Go ahead and look down the list of current contributors vs. recruits at DB and look at how young and talented we are at the position. DB Coach Ron Cooper (though only entering his second year) is a fantastic coach with a knack for spotting talent and coaching lesser talented players into playmakers. Fortunately, he won't have to deal with those issues at LSU.

Tyrann Mathieu is just one of the many talented players that looks to be an early contributor. The New Orleans native entered his senior season as a bit of an unknown on the recruiting circuit, but blew up after a performance at a Tennessee skills camp and continued his dominance at LSU's own camp. He was offered and committed shortly thereafter. 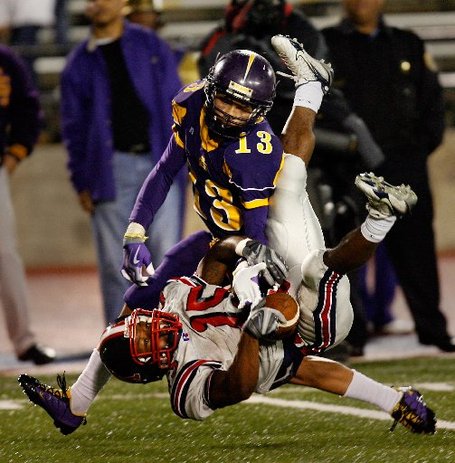 via hssn-media.advance.net
Tyrann Mathieu: Coverin' fools with ease since 2010.
In 2008, LSU landed surefire 1st round pick and general God of the LSU football universe Patrick Peterson. He was accompanied by Brandon Taylor, who some believed may even be a better cover corner. Karnell Hatcher, Derrick Bryant and Ryan St. Julien filled out the class. In 2009, LSU pulled in a talented athlete in Morris Claiborne, as well as stud safety Craig Loston. If you are keeping track, that's three players who became starters in their 2nd year on campus. 2010 brought Tyrann Mathieu, Eric Reid and four other athletes that could go either offense or defense: Ronnie Vinson, Tharold Simon, Sam Gibson, and Jarrett Fobbs.

In short what we see is the insistence (even pre-Cooper/Chavis) on landing versatile athletes that can a) Run and b) Play corner and safety. Has every recruit been a hit? That will never happen. But the success ratio is outstanding. Peterson is the best CB in CFB. Brandon Taylor is more than adequate as a starting safety. Morris Claiborne is starting as a true sophomore and drawing rave reviews. Karnell Hatcher lacks the speed to be an every-down safety, but he's a vicious threat on run downs. Everyone is still awaiting Craig Loston's breakout... but with the feeling that it is only a matter of time. Bryant and St. Julien are likely ST lifers, but that's not a bad thing - you need players like that.

Back to Mathieu. As of practice reports today, he has inserted himself into the two-deep, working behind Patrick Peterson at corner. Not bad for a true freshman. This should come as a surprise to no one, though. Mathieu was one of the players from last year's class with both the size/athleticism to play right away (much easier at CB) and the skills to match.

As mentioned previously, Mathieu didn't enter the 2009-2010 recruiting circuit with much fanfare. But it didn't take him long to make an impression. He absolutely dominated top flight competition (including 2011 LSU commit Jarvis Landry) at the Tennessee skills camp, showing unbelievable man coverage skills as well as the ability to flip his hips, turn and run. Mathieu has great start/stop ability and plays with a lot of confidence. These are probably the most important skills for a cover corner and Mathieu possesses them all.

In a bit of irony, Rivals ranked Mathieu as their No. 1 cover corner, despite the fact that they consider him 13th best at the position (and 191 overall). How is it that a guy can be the best at the essential function of his position but be the 13th best player at that position? One of the many problems I have with recruiting services...

Regardless, Mathieu can flat out play. He's impressed in every setting. He's not an overwhelmingly big kid (probably around 5'9, 175), but he's well put together, long arms, and oozing with athleticism. Some may worry about the height, but take a look at the best NFL corners and you won't find many over 6'0 and most are in the 5'9-5'11 range. Mathieu has all the makings of the next great cover corner at LSU. Is this Patrick Peterson's replacement? I think so...

High End: Mathieu becomes the starter next season after Peterson makes his inevitable early leap into the league. Will go on to be an eventual All Conference type of player and likely much, much more.

Low End: Steps into a starting role next year and plays as a serviceable to good CB starter for three seasons.

Reality: Will be the starter in 2011 UNLESS, PP pulls a LaRon or Dorsey and stays for his Senior campaign. In which case, Mathieu will be the starter in 2012. He will play this year and plenty in the future. Unbelievably skilled guy who will end up being one of the great Tiger corners. Should be a terror to throw on. May get outmatched by bigger guys, but shows a competitiveness and confidence that will keep him coming. Expect a lot.