I'm not the type to get into the finger-pointing blame-game with recruiting services and their "biases." Far as I see it, of course they are biased, but that typically works in LSU's favor in terms of recruiting rankings. Regardless, great players slip through the cracks anyways, and yesterday's 2-star is tomorrow's Top 10 pick... as I've said before, it's the nature of the game.

However, I spent most of last recruiting season absolutely puzzled at Justin Maclin's ranking. Prior to the season, Maclin was among Rivals top players to watch and even considered a potential 5-star. He goes to a few camps during the summer, including the USC Rising Stars camp and comes out with this review from Jeremy Crabtree: "[Maclin] showed great pursuit of the football and good strength to fight off blockers." Mind you, this is one of the elite camps of the year against top flight competition. Yet, Maclin never appeared in the top 100 (if memory serves) and even finished outside of the Rivals 250. All this for a guy who has the size, speed and athleticism people drool over, as well as a healthy set of offers (Florida, Bama, USC, Tennessee, UNC). How could a player like this be forgotten? 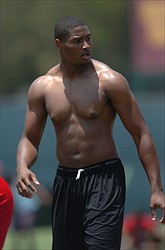 Let me be clear: Maclin is still listed as a four-star prospect and hardly a sleeper. I don't consider him to be 5-star worthy, but I do have trouble with the idea of a 6'3, 215 pound guy that is growing and flashes 4.5 speed isn't top 100 worthy... not being the top 250 is just a joke. My guess is the hangup regards where to project Maclin.

Maclin began the process listed as an OLB and is currently listed on the LSU roster as an LB. Reviews throughout the year were that he lacked the "quickness" to play standing up. After only watching a handful of tapes, I'm not sure if there is merit to the criticism. He's a bigger bodied guy, who looks like he could grow into a speed-rushing DE at some point. Honestly, he looks ideally suited for a 3-4 rush OLB, which is likely where Bama's interest came from. But I don't think that excludes the possibility that he could still be successful as a 4-3 LB in Chavis' system. As I said yesterday, I will default all things LB to the "I trust Chavis" category.

So what kind of player is Maclin? That will largely depend on where he ends up positionally. As a LB, I see a guy who is big, strong and flashes good speed. He willingly takes on blockers and does a good job of using his hands to disengage and locate the ball carrier. He doesn't look to have great lateral quickness, but again, I don't see it as being so poor it will prevent him from being a great player at LB.

Saying all that, I still think Maclin's future is at the DE position. Chavis prefers smaller, speedy linebackers and Maclin isn't cut from that cloth. He's currently listed at 6'4, 230 which is the size of some NFL LBers. His frame looks able to add another solid 30 pounds of muscle without sacrificing his speed. If that's the case, you may have another Sam Montgomery type rush end on your hands with a load of potential rather than a LBer with a little bit lower ceiling. At DE, his lack of lateral quickness becomes less of a concern. He's mentioned in interviews that the coaches have talked to him about playing with his hand on the ground some, so it seems both he and the coaches are open to the possibility.

Depth chart wise, LSU boasts a lot of young talent at each position. Maclin is currently listed as the backup at WLB behind Lamin Barrow (and eventually Ryan Baker). He's about the same size as Luke Muncie, though with much greater room to continue growing. Assuming he remains there and takes a RS this season, the earliest he would seem to be a starter is his senior year (assuming Lamin Barrow is what we've heard). He could function in a rotation though until that time. The depth chart is just as unfriendly at DE.

This is a good thing. Chavis is creating a culture of competition on defense. We are seeing young guys fly up the depth chart and it's not because of lack of sheer players, it's just because Chavis firmly believes in playing the best. That's why you see a guy like Tyrann Mathieu take over the 3rd CB job over a guy like Ron Brooks or Ryan St. Julien. That's why Craig Loston and Eric Reid are playing over Jai Eugene. That's why Sam Montgomery is starting over Lavar Edwards. The list goes on and on and on. If Maclin wants to see the field, he's going to have to work his ass off to earn it. That's exactly what you want.

High End: Honestly, I can't see Maclin starting at any point (barring colossal injury problems) before his Junior year. That is not to say he wont' contribute. I see the shift to DE coming next season once we acquire more LB depth. From there, Maclin will be immediately useful as a situational pass rusher (much like I suspect we will see Barkevious Mingo used this season). He could end up being another dominant rush end in a tradition that appears Montgomery is starting (I know, I know, I'm getting ahead of myself).

Low End: Worst case scenario is that Maclin spends his entire 4-year career as quality depth at either LB or DE. He's too gifted athletically to just be worthless. If he gets antsy, I could see potential for a transfer (particularly with his family's friendship with Larry Porter and that being his home), but I don't see that happening.

Realistic: I imagine he will take a RS this season and be given the opportunity to compete for a DE position next year. Look for his development to be a little "slower" than say a Sam Montgomery, but when he arrives, I think we will all know it. I expect him to be a contributor over the next two season and really be a leader by his Junior year.