LSU-Vanderbilt: What to Watch For

Share All sharing options for: LSU-Vanderbilt: What to Watch For

Well, certainly wasn't a lovely bit o' crumpet last week was it folks? LSU trades one southern Metropolis for another this week, as they travel to Nashville to face the Vanderbilt Commodores in the first game of the SEC schedule.

As the Tigers try to shake off one of the strangest fourth quarters of football I've ever seen, two statistical concepts take the stage as themes: outliers and regression towards the mean.

Regression towards the mean refers to the phenomenon that a variable that is extreme on its first measurement will tend to be closer to the center of the distribution on a later measurement. Basically (you know, half the reason I majored in journalism at LSU was to avoid math) this states that if you flip a coin enough times, you'll eventually come up with an even split between heads and tails. An outlier (more here) is defined as a point outside of the standard deviation of a set of data. Using the same coin-flip metaphor, imagine if you flipped 100 times and 50 came up tails, 49 came up heads and one time the coin landed perfectly on its edge. That would be an outlier.

Now, allow me to illustrate just how strange the aforementioned fourth quarter was. T.J. Yates doubled his completion total in that quarter alone and nearly doubled his passing yardage (on the game, 196 of Yates' 412 yards came on passes thrown inside of his own 20-yard line). Nine of UNC's 20 first downs came in the period and the only third down Yates converted with a pass came in the fourth as well. Four of LSU's eight penalties and 28 out of 65 yards were in the fourth. There was a 97-yard touchdown pass, a recovered onside kick in an expected situation* and a fumble in a get-the-first-down-and-end-the-game situation. Think about how often any of these things happen for a second. Ironically, the Tarheels probably had a better chance of scoring on those two final plays from the six-yard line than they had of pulling off any of those other things. Even by the standards of the Les Miles era, it was bizarre.

*Note: onside kicks in expected situations, i.e. when the receiving team knows the kick is coming, are recovered by the kicking team approximately 20-percent of the time. LSU and LSU had not allowed an opponent to recover an onside kick since Western Illinois in 2003. Statistical references from cfbstats.com and advancednflstats.com.

It's safe to say that most of these events will be the outliers of this football season. The question is how far outside of the norm will they be. Hopefully, this week will begin to answer that question.

But even going by what we've seen already, you can expect some regression towards the mean. The when you pair the fourth quarter of last week and the second, you get two extremes. This team will find a neutral ground in between those two extremes. But the question is, will it be at a place where I wonder "is it gay if it's with Patrick Peterson?" or somewhere closer to last week - which had my liver asking me why I hate it so.

The Commodores are the basic (funny how we consider this type of offense "basic" in this day and age) spread-type running game. Mostly shotgun-based, with quarterback Larry Smith and running backs Warren Norman and Zac Stacy playing off one another with the basic veer and read-option run plays. New head coach (and noted turkey semen enthusiast) Robbie Caldwell was Vandy's offensive line coach before Bobby Johnson's resignation and he seems to know what he's doing. The ‘Dores managed 192 rushing yards last week against an experienced Northwestern front-seven, and 432 yards of total offense without surrendering a sack.

Smith, who notably struggled last season, passed for 240 yards with one TD and a pick. Tight end Brandon Barden (6-5, 250) grabbed four catches for 63 yards and a touchdown. The passing game will be mostly off of play-action, so Brandon Taylor and his safety-mates will have to improve from last week's struggles with it.

But the main cogs of the offense will be Norman and Stacy. The former is the reigning SEC freshman of the year and managed 136 yards from scrimmage last week despite being hobbled by a recent knee-scoping. He's an elusive back who can make things happen in the passing game as well - and had three TDs in 2009 on kick returns. Stacy is a little bigger and more of a power runner. And his 33-yard touchdown run in the fourth nearly helped Vandy snag a win last week.

On defense, coordinator Jamie Bryant presents a different look from North Carolina, with a defense that will use more overloaded fronts and bring pressure from different angles, with some 3-3-5 looks on passing downs. Of course, the secondary didn't exactly fair all that well last week, allowing Northwestern's  Dan Persa to complete 19 out of 21 passes for 222 yards (10.6 yards per attempt) and throw for three touchdowns.

Special teams were a little adventurous, with a 33-yard net average for Richard Kent, and -1 punt return yards for the team. Kicker Ryan Fowler also missed a 44-yard field goal, though Josh Jasper feels his pain on that.

Once again, 19-21, 222 yards and three touchdowns. I'm not saying Jordan Jefferson's going to torch this outfit for 300 yards, but I expect an efficient outing. As Poseur said, he was just kind of "there" against North Carolina. I expect him to account a little better than that in week two.

Miles has indicated redshirt freshman Josh Williford will get the start at right guard in the place of the injured Will Blackwell. Williford channels Herman Johnson in the size department (6-7, north of 340 pounds), but looked pretty rough in some limited action against North Carolina. But with Vandy's d-line averaging about 272 pounds a man, he should be able to have some success as a masher. T-Bob Hebert should be back on the bench. He was solid (not quite as bad as initially thought), but as the only other experienced center on the team, he needs to be on the bench for depth purposes.

But Gary Crowton has to play a role in that, showing some commitment to the power running game. Last week's attack was successful primarily out of the spread, and Stevan Ridley was effective (but put two hands on the ball in traffic man!). However, somebody else besides Ridley and Richard Murphy have to be involved. Whether it's Michael Ford, Spencer Ware or Alfred Blue (and the latter two saw time on special teams last week), somebody else has to be involved. If nothing else, just so there's another back on this team with some experience. Expect Russell Shepard to be active in the run and play-action game again.

Stevan Ridley's apartment. Midnight.The junior running back awakes to see his head coach standing in his bedroom doorway. Les Miles stares at him. The unblinking stare of a man who has seen the abyss. And had the darkness stare back. He has a football in one hand. And a large wad of taffy in the other. 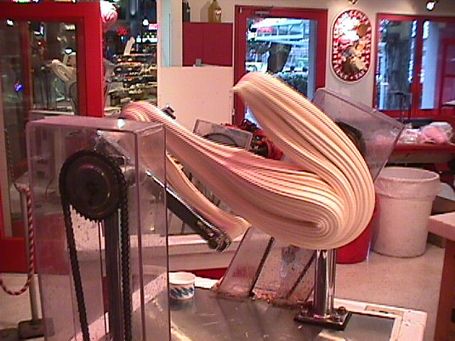 Coach Miles would like to have a word about ball security Stevan...

Ridley (startled): Coach...is that you? What the hell are you...

Miles: Why can't you hold on to the football?

Miles throws the ball at Ridley, who sits up in bed and catches it as Miles walks towards him, stretching out the taffy.

Miles: Why can't you hold on to the football? I...I just don't understand why it's so hard...But you'll learn...

Miles: You're going to learn to hold on to the football. He begins wrapping the taffy around Ridley's hands and the football.

Ridley: Coach! Stop that! This is disgusting!

Miles (still wrapping the taffy): You're going to learn to hold on to the football. You must have a want...

Ridley (voice trembling): It's so sticky!

I'm rarely one for predictions, obviously, but I feel comfortable suggesting several things won't happen this week. LSU won't give up a 97-yard touchdown, 261 passing yards in the fourth quarter or fumble three times. But if you're expecting a 40-point beating with 500 yards of offense, you're going to be let down. It's true that most teams make a lot of improvement between week one and two, but in LSU's case a lot of that improvement will involve tightening things up like tackling and coverage on defense and finding the right line combination on offense (hopefully, Williford handles himself better).These types of improvements are incredibly vital and absolutely necessary, but they aren't always reflected on the scoreboard. Honestly the number I want to watch the most is the number of plays LSU runs.

We know by now that LSU will not make a major effort to run up the score, but I do think there will be a more concerted effort to wear Vanderbilt down in the second half and finish things. Expect at least one other running back besides Richard Murphy or Ridley to get the ball - probably Alfred Blue or Spencer Ware. I know we would all like to see that early in the game, but I wouldn't expect that at this point.

Vanderbilt managed to down three out of six punts inside the 20-yard line last week. Patrick Peterson had nearly 300 return yards. Something tells me he won't see too many pitches to hit at this at-bat. Of course, if Larry Smith is brave/stupid enough to throw something his way, there will still be a chance for somebody to kneel before Zod.