After starting the recruiting season hot at the wide receiver position, nabbing WR Mike Davis from Dallas and WR Justin Hunter from Virginia Beach, the future looked bright. Entering the recruiting season, the need was obvious. LSU was top heavy with talent (at this time, Shep was still a QB,  mind you), but lacked quality depth. It was obvious from the get go that there would be multiple WR commits in the 2010 class. With Davis and Hunter in the fold, it appeared LSU could take a chance on some high upside in-state WR prospects to fill out the rest.

Come late January, Davis flipped to Texas, Hunter flipped to Tennessee and LSU was left empty handed (outside of the potential of Tharold Simon at WR, who the staff maintained was a DB prospect). The staff shored up the situation slightly in 10 days after Hunter's de-commitment, reeling in WR James Wright (who was a take regardless) and an extending an offer to sleeper WR prospect and recent Arkansas commit Armand Williams. Little was known regarding Armand Williams at the time, but his athletic potential gives the fans plenty to be excited about. 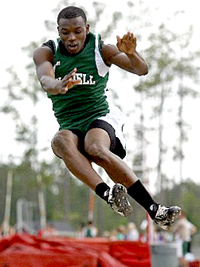 via vmedia.rivals.com
No one can deny Armand Williams' immense physical ability. Can he put it together?

What catches you immediately about Williams is his superb size. 6'3, 185 fits the model of success LSU has had at the position over the past several years. Couple that with his ability to be a State High Jump Champion, meshed out through a 40-inch vertical. With that size and athletic ability, you may be wondering why a player like this didn't get an offer sooner?

Well, it's a variety of factors. First of all, Williams' high school, Slidell High School, was a run-heavy school with, to be a honest, a lack of a competent QB. Honestly, if you think JJ is bad, watch this highlight tape and notice how the QB struggles to complete much other than a 5-yard pass.

It's apparent to me that his offense at least cost him some production (and perhaps, some notoriety). That being said, this doesn't fall square on the offense. There's a reason Williams is a 3-star prospect on every recruiting site (sans Max Emfinger's overly glowing review). As a receiver, he's still raw. His route running skills are far from flawless. He doesn't appear to show tremendous burst in and out of cuts, which is something I always look for from a dominant receiver. He doesn't appear to have great speed either.

Yet, there's plenty of things to like about Williams' game as well. He's a big, physical target. He rarely goes down on first contact, which indicates some type of toughness. He's a hands catcher that does a good job of going up to get the ball at its highest point. Obviously his size and leaping ability are going to give him some distinct advantages against smaller corner backs, particularly in the red zone.

Williams apparently impressed early on at LSU, getting a chance to practice with the upper classmen in his first few days. With a noticeably thin WR corps, the opportunity to earn some early snaps was present for Williams. Yet after a few days, he seemed to disappear from the picture and be passed over by other true freshmen Kadron Boone and James Wright. Barring disastrous injuries at the WR position, it now seems Williams is on pace for a RS season, which will be necessary to refine his body.

Ultimately, Williams is at LSU based on our need for receivers and his athletic upside. He's not the type of player I would expect to see early contributions from. I'm interested to see what his body looks like next season with a year of weight and speed training. I'm sure the coaches will be working on his burst and explosion, which is an area that needs improvement. I've spoken with Armand on one occasion, and he's a genuinely nice kid who is thrilled with the opportunity. You get the impression he's not going to let it go to waste.

High End: Williams' athletic potential is limitless. There's potential for him to blossom into an absolute stud based purely on physical tools. However, physical tools aren't all that's required to turn into a monster. If Armand is able to put it all together, I can see him being an impact player by his Junior season. More talented and more refined players sit ahead of him on the depth chart, and Jarvis Landry next season will also push him. I see Armand amounting to a solid contributor.

Low End: Well, there's always a chance for a transfer, particularly with the talent surrounding him. However, I think Armand will stick it out and at worst be a non-contributor.

Realistic: I don't see Armand ever blossoming into a starting threat on the outside. To me, his potential is maxed out as a red-zone threat. That being said, it's hard to gauge a player who excels almost purely on physical talent with little else surrounding him. If Armand blows it up in the next few years, I wouldn't be surprised in the least. The talent is certainly there, but there are many hurdles he must first overcome.